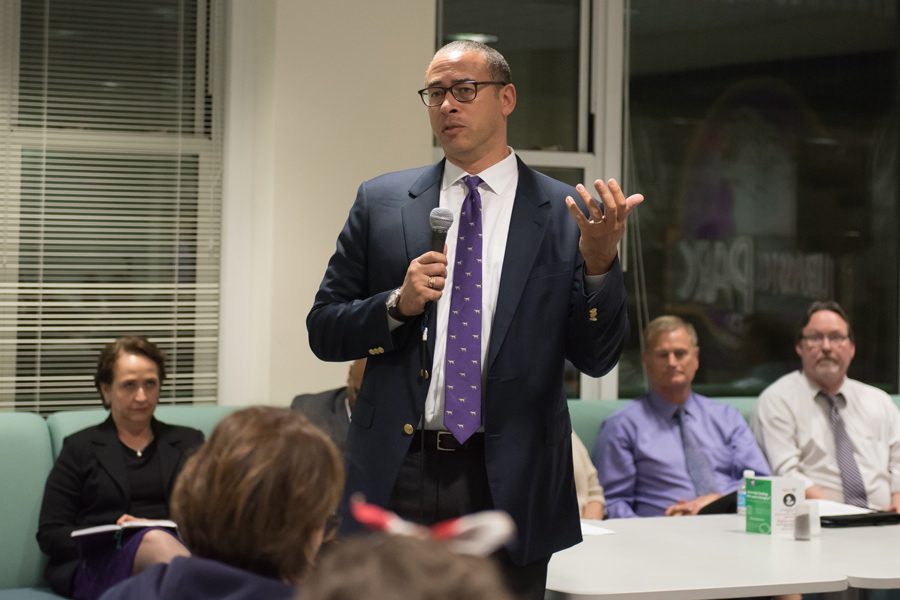 Provost Jonathan Holloway speaks at a community dialogue on Oct. 9. Holloway, who previously served as the dean of Yale College, told The Daily in an interview that he had the “Morty effect” at Yale.

Provost Jonathan Holloway said when he served as dean of Yale College, he possessed the “Morty effect” because everyone recognized him.

But Holloway told The Daily in an interview earlier this month that once he came to Northwestern to assume the role of provost on Aug. 1, he was an unfamiliar face on campus.

“When I walk somewhere on campus with Morty, I am totally invisible,” Holloway said. “It’s been strange to walk around the greater Evanston area and, like, no one’s saying hello to me.”

In his new position, Holloway will work closely with University President Morton Schapiro, overseeing academic priorities and the preparation of the annual budget.

While Holloway said the anonymity has been nice, it may change soon — he gave a speech at convocation, and Schapiro has asked him to take on a more public role. Even though he’s been “walking in Morty’s shadow,” Holloway said he is committed to bridging the gap among students, faculty and administrators.

Holloway said universities are “sunk” if they don’t have good communication among community members. He added that even though his position isn’t usually “student-facing,” he plans to figure out the best venues for undergraduate student engagement while at NU.

“There may not be precedent here for a provost engaging students in a fairly regular fashion — that door’s open to do so now,” Holloway said. “I just don’t know exactly how to do it, with making sure I’m not straying in somebody’s lane. It’ll be a work in progress.”

Schapiro told The Daily in an interview that he asked Holloway to be “more involved and more public than probably any provost has ever been” at NU because he is a great public speaker and personality.

Holloway is humble and has expressed a willingness to learn about the NU community in the two months since he moved here, Schapiro said.

The provost said he’ll always be willing to meet with students at NU.

Yale senior Peter Huang said he met with Holloway about every three weeks when he served as the Yale College Council president. He said he and his vice president used the meetings to inform Holloway of current issues facing the student body.

Huang said he found Holloway to be a “straight shooter” and reasonable when handling students’ concerns.

“He was extremely sympathetic,” Huang said. “He also definitely went out of his way to just sit down and listen. At the end of the day, a lot of students understand that processes take time, especially in a bureaucracy like any university administration, and they just want to make sure things get sped up along. … Dean Holloway understands that perspective.”

He added that Holloway’s interactions with students at Yale could help him keep students in mind as provost at NU.

Holloway said Schapiro’s vision for him as the University’s provost was surprising. He said he assumed that a provost was meant to be a “silent partner” to a university president.

Schapiro said the best way for Holloway to know the NU community is to engage with students, faculty and staff.

“It would be such a waste of his talents if he weren’t (a visible presence),” Schapiro said. “He’ll do his job better by doing it more publicly than most provosts tend to do. … He’ll have the Jonathan effect.”