Paxton: Fitzgerald’s attitude on targeting is good, but it needs to be better 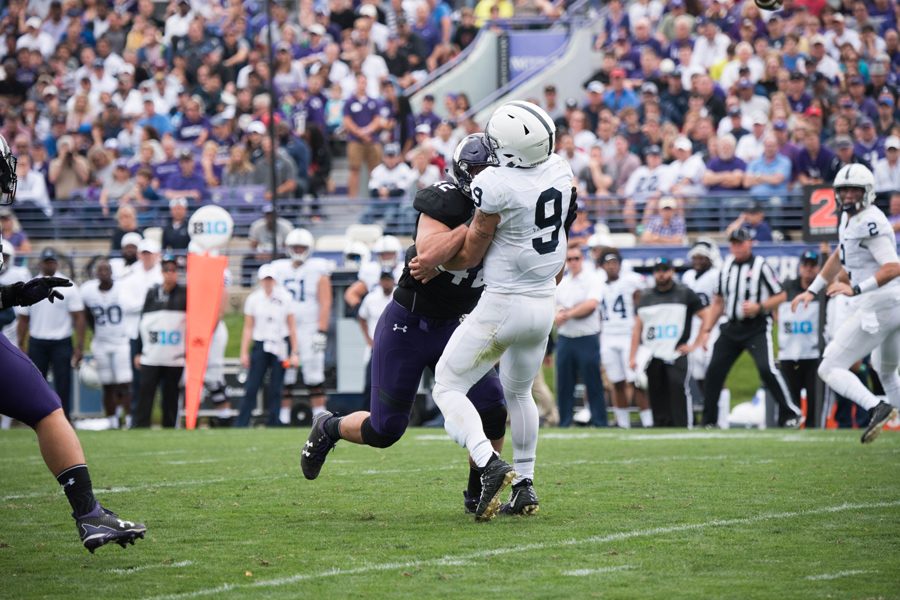 Paddy Fisher delivers a hit on Penn State quarterback Trace McSorley that led to an ejection for targeting. The redshirt freshman linebacker was one of two Northwestern players ejected for the foul against the Nittany Lions.

Asked this week about the national uptick in targeting calls, including second-half ejections for two key Northwestern defenders against Penn State on Oct. 7, coach Pat Fitzgerald began both diplomatically and hearteningly.

“I’m not changing my stance because a couple of our guys got called for it,” he said. “It’s the right call to eliminate that play out of our game.”

For good measure, he began his answer to a follow-up about a rule tweak with the strikingly similar, “You know, I don’t think I’m going to change my stance on the overall feeling of the call.”

But Fitzgerald’s full response is less worthy of plaudits. He cast doubt on whether senior safety Godwin Igwebuike really deserved to be ejected against the Nittany Lions and urged the replay booth to more stridently confirm the validity of targeting calls.

This sentiment is misguided. Yes, Fitzgerald deserves praise for defending the rule and calling to remove dangerous plays from football, and he has not said that any of the Wildcats’ three targeting ejections this season were wrong. But the way forward for a sport that desperately needs to become safer is to axe any and every hit to the head, no matter how innocuous some may be.

I’m sympathetic toward Igwebuike, who barely tapped Penn State running back Miles Sanders. But because the bump came from the crown of Igwebuike’s helmet, the senior captain soon headed for the locker room and did not return until after halftime in Maryland last week.

Call it tough luck. Call it harsh. But also call it the right decision.

The NCAA may have added ejections to targeting in 2013 in an attempt to stamp out the violent spearings that instantly cause concussions and make fans’ stomachs churn. Nearly as important, however, is removing the repeated “soft” blows that add up over time.

That was made shockingly clear in July, when medical research found that 87 percent of 202 former football players had chronic traumatic encephalopathy, the degenerative disease better known as CTE that has established links to repeated head trauma.

In other words: Every hit to the head is gravely dangerous. There can be no leeway in allowing them. Only through ejection can this message be delivered strongly enough.

Igwebuike did nothing malicious when he grazed Sanders’ head. As Fitzgerald pointed out, he turned his head at the wrong time and could do nothing about the contact. The “hit” was neither dangerous nor really even a hit, but this discussion isn’t really about that one play. Rules protecting player safety must always come first, no matter the intricacies of the play.

So yes, it’s heartening to hear Fitzgerald say, as he did last week, that targeting plays are “something that we work really hard to take out of our game,” and to hear him say it earnestly and honestly.

But when brain health may be involved, it is less comforting to hear him say, referring to the ejection policy, that “taking a game … is a pretty severe penalty.” The health concerns are what is truly severe.