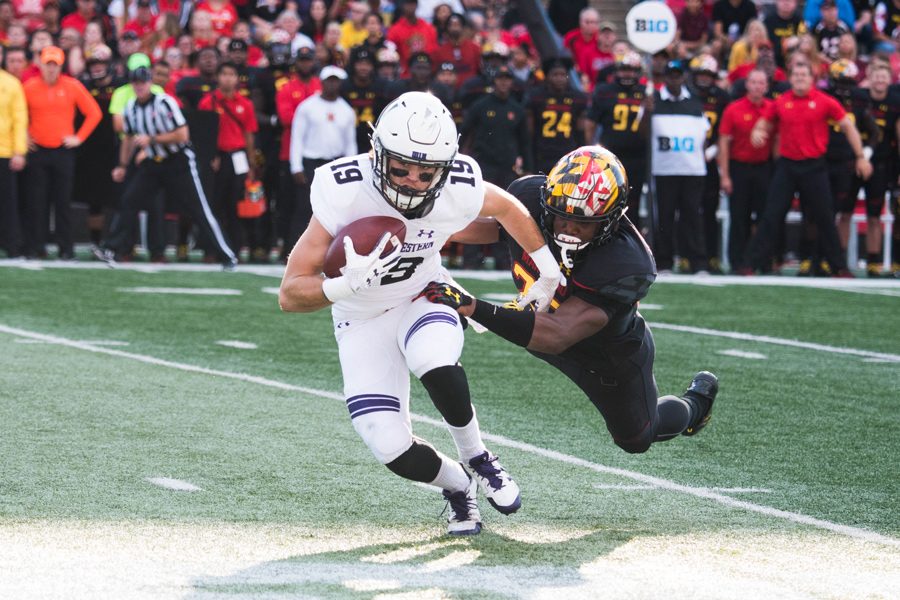 Riley Lees takes on a tackler. The redshirt freshman receiver matched a career high with three catches against Maryland.

All told, it represented the type of performance the deep but fresh-faced group will look to replicate as it wades deeper into the season, starting with a pivotal game with Iowa (4-2, 1-2) at Ryan Field on Saturday.

Thorson does not lack for receivers to connect with this season. He hit nine different targets at Maryland, and has completed passes to at least seven each game this season.

But it has still been an up-and-down first half of the campaign for a wideout group adjusting to life without the graduated Austin Carr, Thorson’s old favorite receiver and the Big Ten’s leading pass-catcher a year ago.

Described by coach Pat Fitzgerald this week as “developing,” the team’s receiving corps is headlined by Wilson, shifty junior Flynn Nagel and 6-foot-4 sophomore Ben Skowronek. The trio has impressed at times, such as the season-opening win over Nevada when Skowronek amassed 123 receiving yards and Fitzgerald gushed about the team’s depth at receiver.

But since the opener, the group has struggled at times to get open for Thorson, with the signal caller’s completion percentages plummeting in losses to Duke (37.9 percent) and Penn State (52.8 percent). In NU’s Big Ten opener, Wisconsin waxed NU in Madison and the Badgers sacked Thorson eight times, a number influenced by the wideouts’ difficulties getting separation.

Then came the rebound against Maryland.

“Our receivers were not pleased with their inability to make plays the last two weeks,” Fitzgerald said in College Park after the win. “They worked really, really hard to get better this week, and I think it showed.”

Wilson echoed the sentiment Tuesday. He said the group had not “done what we needed to” against Penn State and Wisconsin but called itself out and had a great week of practice going into the Maryland game.

Lees, the freshman who hauled in three catches against the Terrapins, said this week that the group is growing more in-tune with Thorson as the season rolls on.

“We’ve got a lot more confidence in ourselves too,” Lees said, “which helps us go out there and play fast.”

The Iowa defense more closely approximates Penn State’s and Wisconsin’s, and Fitzgerald did not hold back in praising the Hawkeyes’ secondary.

“They’re well orchestrated. They’re on the same page,” Fitzgerald said Monday. “You have to earn it against Iowa. They don’t make mistakes. They don’t beat themselves.”

On his side of the field, Fitzgerald said his receivers are looking to improve and to smooth out the inconsistencies they’ve displayed thus far this fall. For the Cats’ final six contests to turn out better than their first six, continued improvement at wideout could be key.

“They’re working to get better. That’s where we’re at,” Fitzgerald said. “We’re an average team right now. You are what your record says it is, and that’s what we are: We’re average. And we’ve just got to keep getting better.”