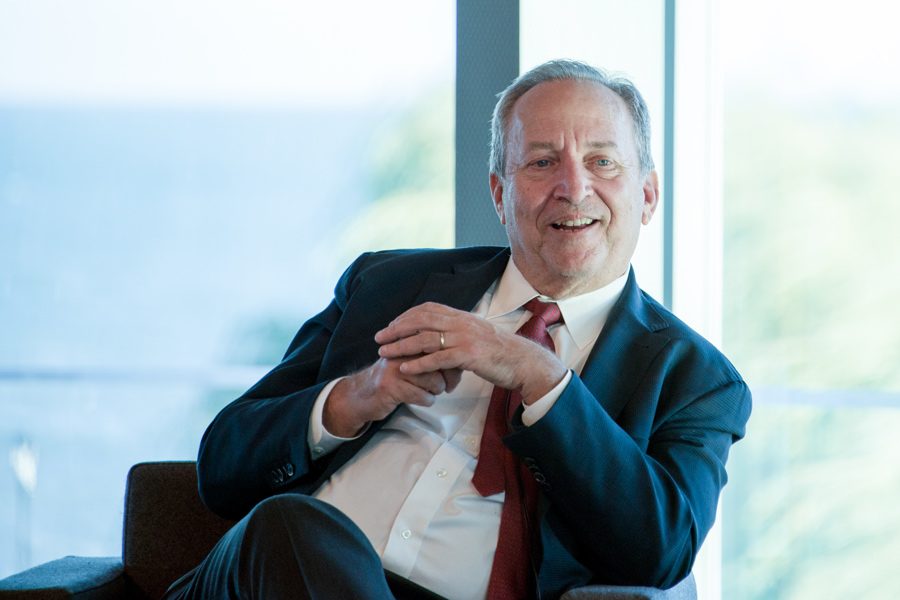 Former Secretary of the Treasury Lawrence Summers speaks at the Kellogg School of Management Global Hub at an event Wednesday. Summers discussed his career in macroeconomic analysis and advising.

Former Treasury Secretary Lawrence Summers compared his roles in politics and academia at an annual department of economics lecture Wednesday.

Summers, who served as director of the White House National Economic Council under former President Barack Obama, spoke about his different careers with Kellogg Prof. Janice Eberly. About 300 people attended the talk at the Kellogg School of Management Global Hub.

When working in government, Summers said he had to balance his economics background with political pressures.

“You can’t be slavishly guided by your economic reasoning,” he said. “You have to understand the broad political forces.”

Summers, who also served as president of Harvard University, reflected on decades of experience in public policy and academia and compared the roles of each. Though he was used to following his own academic reasoning as a professor, Summers said he had to consider political factors while working for the government. As Treasury Secretary, for example, he said he learned to consider the reputation of the U.S. government when making decisions.

“You can contribute to the development of concepts that will become the future, which will shape the decisions that policymakers in the future will make,” Summers said. “You can develop ideas that may not be useful at this precise instant, but will have their moment.”

He added that especially in the current political climate, one must consider the long-term effects of working for any administration.

“If you are a moral person of good will and serious commitment to analysis, you have to think very carefully if you would like to be part of this administration which seems to be neither moral, nor of good will, nor with any interest in accuracy or analysis,” he said.

Weinberg junior Roxanne Zong told The Daily she was “impressed” by how Summers discussed morality as an important aspect of working in government.

She added she was interested in Summers’ perspective on economics, which challenges the government’s reliance on set models.

Nonetheless, she said she was surprised he “surrendered” to political factors that fall outside the field of economics.

Michelle Obuhanich, who works in the economics department, told The Daily she was pleased by the interest shown in the event. In addition to the hundreds of ticket-holders, she said event organizers let in additional students who did not have tickets.