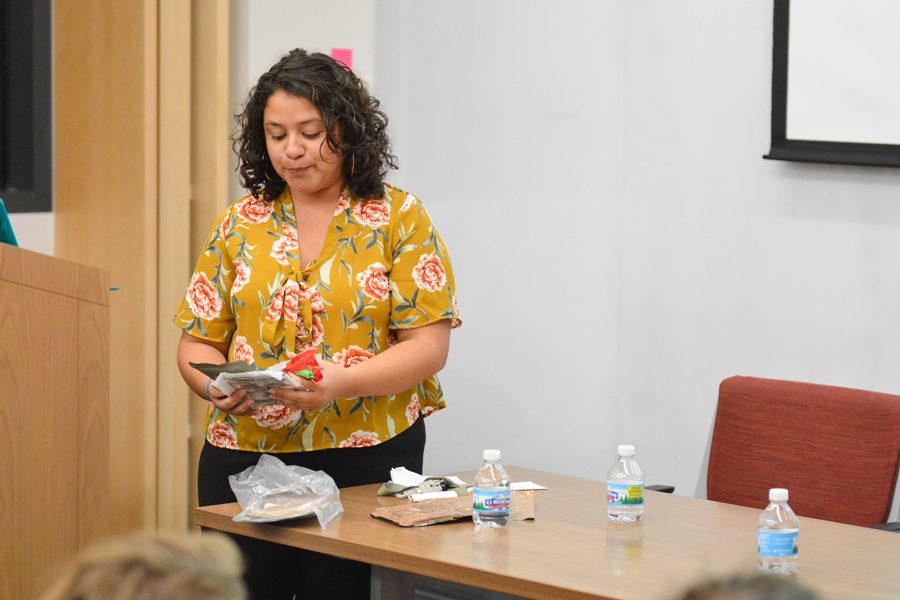 Aparicio and Rivera Montes gave a presentation to roughly 50 people about Puerto Rico’s colonial history and the effects of Hurricane Maria in September. During the event at Kresge Hall, the pair said President Donald Trump has not provided sufficient aid following the hurricane.

“There was another time when he said Texas and Florida were doing great, but we’re going to need to stop sending aid to Puerto Rico soon,” Rivera Montes told The Daily. “So the view is differential. Obviously, if Puerto Rico were in Massachusetts, this would not be happening.”

After Hurricane Maria hit Puerto Rico on Sept. 20, more than 85 percent of Puerto Ricans lost power and over 40 percent had no clean water. The diesel fuel that hospitals rely on is becoming scarce and medical supplies are dwindling, Rivera Montes said. People are suffering from a shortage of food, and the aid supplies from the U.S. are not being distributed, she added.

Because Puerto Ricans do not have the ability to vote in American elections, their citizenship is seen as “second class,” Aparicio said. The government’s late response to hurricane relief is consistent with its colonial history, she said.

“Policy in the relationship between Puerto Rico and the United States was just as bad before Donald Trump, before the hurricane,” Rivera Montes told The Daily. “So I think there’s a history of that.”

Rivera Montes added that an economic crisis in 2005 left the territory $72 billion in debt, which has made recovery difficult.

“Let people know that this is the situation,” she told The Daily. “Calling Congress, calling representatives, joining resistance. … Making noise around that and political pressure on the Congress members that can vote (is important).”

Second-year graduate student Felipe Neves said he hopes Puerto Ricans will feel that independence is a necessity after seeing Trump’s insufficient and slow response in providing aid. Independence from the U.S. will allow the territory to have financial freedom over its future, Neves said.

In addition, Neves said he hopes the event shows people how colonialism still exists in the modern world.

“They were very clever to show us the process of colonization –– of creating debt and of loans,” he told The Daily. “(We’ve) seen that power is a structure in this particular part of the earth.”