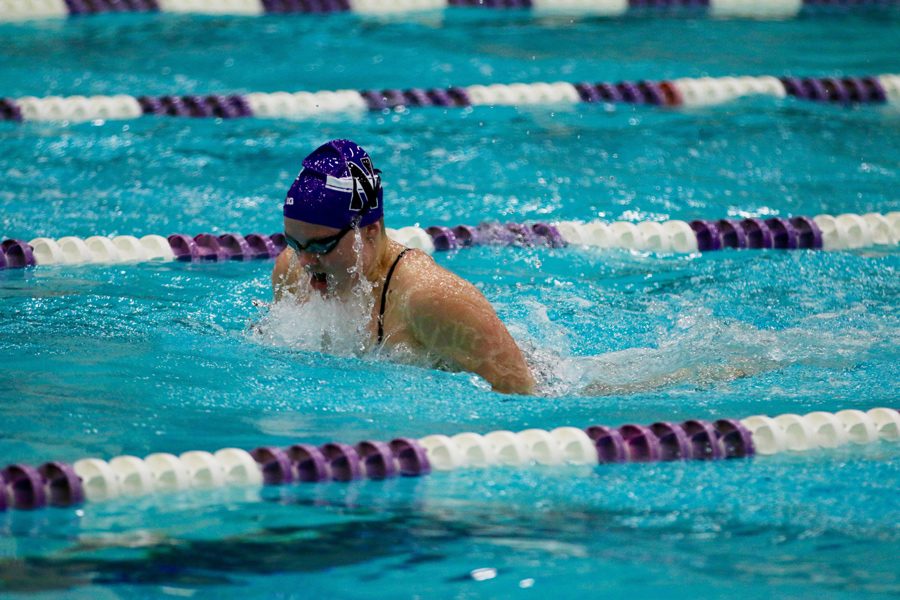 Lindsay Adamski swims. The junior and the Wildcats will begin their season Friday against Georgia.

With a fresh lineup of athletes and a positive perspective, Northwestern is ready to compete and make waves in the Big Ten this year.

The Wildcats will compete in six home meets and four away meets before the Big Ten Championships in February, where third-year coach Abby Steketee and the team will look to improve on last season’s seventh-place result.

This season will be an uphill battle for NU, having graduated nine seniors, including Melissa Postoll, who holds three individual school records and one relay record. However, junior Peyton Greenberg said the team still has a lot of depth “across the board,” especially in breaststroke, individual medley and freestyle events.

The team will aim to reload with seven freshmen swimmers and two freshmen divers. Steketee said the freshmen have brought a fierce energy, and she welcomes their determination and passion.

The Cats hope to find some of that passion in freshman breaststroke swimmer Sophie Angus, a 2016 Canadian Olympic Trials finalist. Angus said she plans to put the team first during her debut season.

“I’m not specifically thinking about times,” Angus said. “I’m focusing on doing as much as I can for the team and helping the team move up to another level.”

Even with a large freshman class, the Cats will not be starting over. The returning squad is headlined by Valerie Gruest, a sophomore who dominated distance freestyle events last season, toppling the school records in the 500-, 1000- and 1650-yard freestyles.

She is joined by junior diver Olivia Rosendahl, the NCAA champion in the platform diving event and NU’s record holder in all diving events. Rosendahl also earned a gold medal in the 10m competition at the USA National Diving Championships this past summer.

Rosendahl said she is excited to have freshman divers this year, considering there weren’t any last season. She said she also hopes the increase in the number of divers will help the team have more representation at the NCAA Zones meet.

The Cats will go up against stiff competition this season, with No. 4 Georgia, No. 12 Wisconsin and No. 17 Minnesota all on the schedule. In addition to the ranked opponents, NU will look to replicate last season’s wins against Illinois, Illinois-Chicago and Rutgers.

Steketee said she wants the team to focus on improving technique, strategy and energy during the regular meet season to prepare for the Big Ten Championships. Despite the challenges to come, the Cats have a unity Steketee said she hasn’t seen in the past.

“It’s definitely the most united, cohesive group I’ve coached yet, and a lot of that just radiates from our seniors,” she said.

NU will open its season against the Bulldogs on Oct. 20.