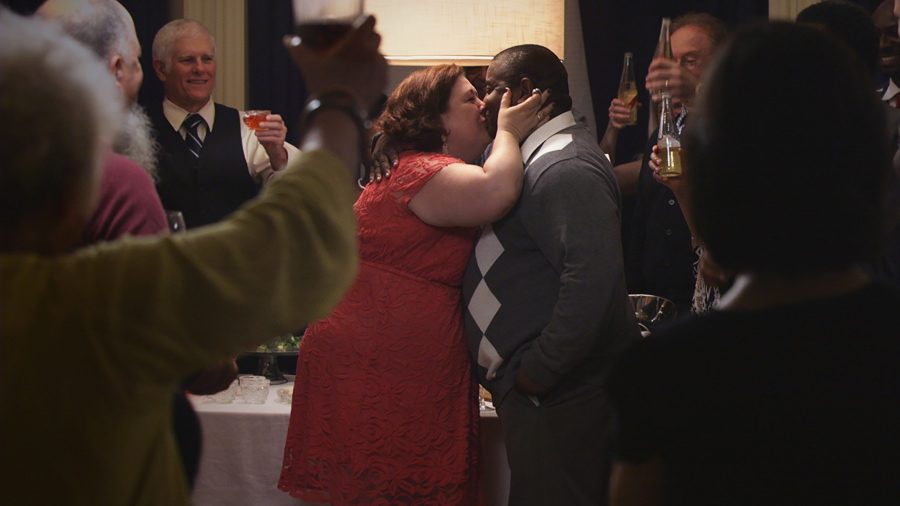 Grace (Sara Sevigny) and Zeke (Antoine McKay) kiss at a party. The two played one of the interracial couples in “Rogers Park.”

Many people identify with a single “coming-of-age” moment in the transition from youth to adulthood, and Communication Prof. Kyle Henry said people go through that again when transitioning to middle age.

“Rogers Park,” an independent film produced by Henry, premieres Thursday at the Chicago International Film Festival, the oldest competitive festival in North America. The film follows two interracial, middle-aged couples in the titular northern Chicago neighborhood as they fight to keep relationships with their families and significant others intact.

“At this point in life we’re trying to figure out where we’re at, (we’re asking) what were those dreams of youth, what do we need to move into to sustain us into the future,” said Henry, a Radio, Television and Film professor. “I like making work that is meaningful to me at whatever stage at life I’m at and whatever I’m doing.”

Henry said the creative team conducted blind casting, not taking into consideration the actors’ race, gender and sexual orientation in the audition process. The writers didn’t have a concrete vision of the characters before casting, but rather created the roles and relationships around the actors who were chosen for the film, he said.

The casting workshops were largely improvisatory, Henry said, because the crew put a larger emphasis on building the relationships they aimed to capture on film.

“So often, you’ll see films where actors haven’t been brought together until the day before they shoot their scene and they’re supposed to be married for 20 years, and you can sadly tell these people have just met,” he said. “There’s no chemistry or common experiences they can draw from to create the scenes they’re in.”

Sara Sevigny, who plays Grace in “Rogers Park,” said the actors were often “pushed out into the world,” being filmed on spontaneous dates or during arguments in parking lots while in character.

“What’s attractive about the way the story goes is you start at (Grace and her husband’s) best place and see what real couples have to go through in life, especially when you’re entering middle age,” she said. “(It explores) what happens when you get complacent in your relationship with your partner, what it does as space and distance comes between you.”

Screenwriter Carlos Treviño called the Rogers Park neighborhood the most diverse in Chicago because of its community and culture, with people from many different backgrounds crossing paths.

Most of the filming was done in the neighborhood to reflect this diversity in the film, Treviño said.

“There are so many people who come as immigrants, people who are refugees,” he said. “It’s a place where artists and writers live … (and) where lots of different types of people come together and collide off each other.”

Henry said Rogers Park has a prominent tradition of activism and is a place where possibilities exist for communication across boundaries, which he believes is “something special.”

He hopes “Rogers Park” will contribute to ongoing conversations about how to gracefully transition into middle age. Although the discussions prompted by the film are quite serious, Henry said he and Treviño tried to explore the humane and humorous aspects of daily life.

In any other movie, Sevigny said the four main characters in “Rogers Park” would likely play the roles of neighbors or best friends — characters usually relegated to the background.

“It was fascinating for me to see what our stories would be if we were given opportunities to tell them,” she said. “It’s really fun when you get to put (supporting characters) front and center and see what makes them hurt, what makes them love, how they interact. That’s really exciting.”