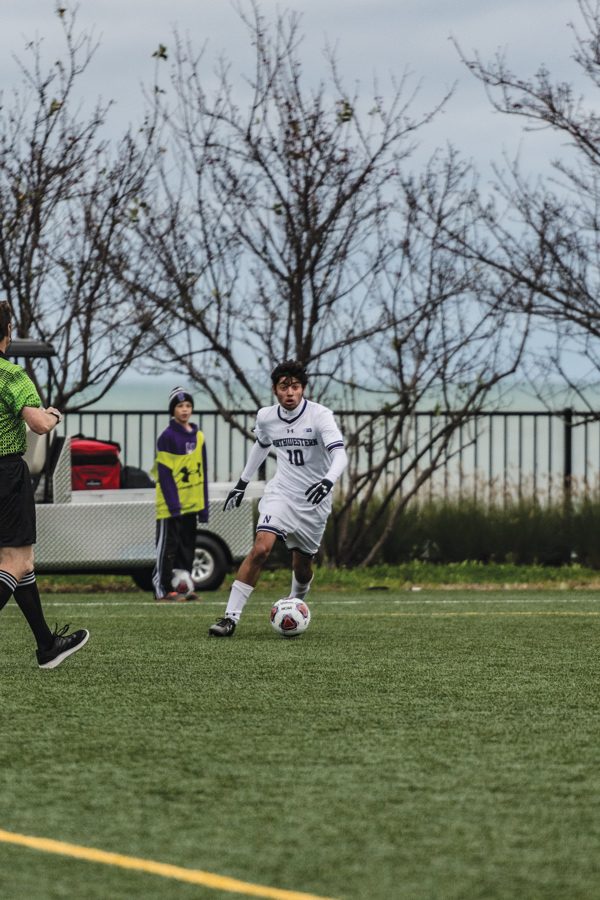 Tommy Katsiyiannis kicks the ball. The freshman midfielder scored both of Northwestern’s goals in the Wildcats’ 3-0 win over Rutgers.

It was a week of firsts for Northwestern. After collecting their first road victory of the season with a 2-0 win at DePaul on Wednesday, the Wildcats earned their first Big Ten win of the year Sunday afternoon.

The victory marked the Cats’ first shutout over a Big Ten opponent since a 1-0 decision over Penn State in October 2016, and gave NU its longest string of wins this season and its first three-game win streak since 2013.

“Every win in the Big Ten is a good one,” coach Tim Lenahan said. “With the wind blowing out here, you never know what’s going to happen. We really were sharp in the first 20 minutes or so.”

Freshman midfielder Tommy Katsiyiannis scored his second and third goals of the season to put the Cats up early. Katsiyiannis has played a key role in his team’s attack since he notched his first career score in NU’s overtime loss to Notre Dame on Oct. 3.

His first goal of the game came just five minutes into the match on a rebound off a blocked shot from sophomore forward Mac Mazzola.

Mazzola scored his third goal of the season unassisted in the 25th minute.

“We came out and … played the game on our terms, so we were really able to take it to them in the first half,” Katsiyiannis said. “We did a really good job staying composed and killing the game in the second half, even against the wind.”

The Cats struggled in the first half earlier in Big Ten play this season; in the 11 games before Monday’s win over Western Illinois, NU had only scored two goals in the opening period. In the past three contests, six of the Cats’ eight goals have come in the first half.

NU struggled with depth issues late in the game, Lenahan said, working with only two reserves after senior forward Elo Ozumba left with an injury late in the first half. Junior goalkeeper Robbie White performed well in net, finishing with seven saves in his third career shutout.

“We knew that they would be coming down on us because the wind was how we got the ball out of our end,” White said. “We wanted to take a better push than (against Western Illinois) when we gave up two goals in the second half, but we took care of business today and got the shutout.”

The win maintains the Cats’ momentum entering an important stretch in their schedule. NU has two games remaining in Big Ten play, starting with a home matchup against No. 6 Michigan State on Friday night and concluding with a road trip to face Penn State.

Lenahan said the Cats will try to secure the No. 7 slot in the conference standings in time for the Big Ten Tournament and avoid the No. 8-No. 9 first-round matchup.

“The Cats are getting hot,” White said. “We’ve got three in a row, (so) hopefully we can knock off Michigan State and keep the streak and keep that momentum going until the end of the year.”