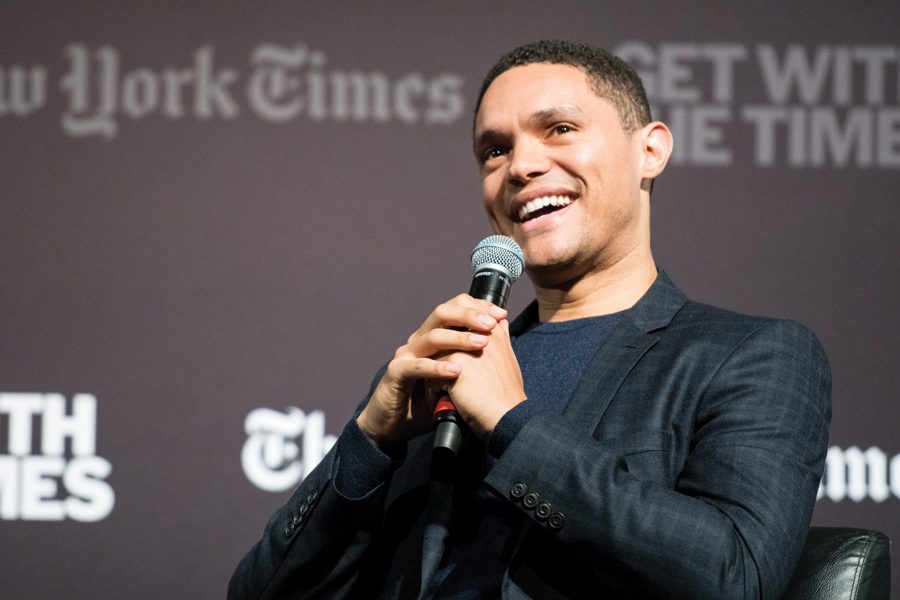 “The Daily Show” host Trevor Noah speaks on Sunday in Cahn Auditorium. Noah discussed his experiences as a black man living in South Africa and the United States in a conversation with John Eligon (Medill ‘04).

Early in his comedy career after immigrating to the United States from South Africa, Trevor Noah said he didn’t understand why black Americans aspired to visit Africa.

Noah said he found the desire “hilarious,” especially because he wanted to emulate black Americans he saw in music videos with mansions and gold chains. But he soon realized his mistake, he said.

“It’s funny because you don’t realize how many black Americans have been robbed of a place they believe is their home,” Noah told about 1,000 people in Cahn Auditorium on Sunday. “Then you understand beneath the funny, the pain that’s attached to it. You come to realize how much you took for granted something that you never even thought of as a privilege, and that is knowing your story.”

The author and host of “The Daily Show” spoke at an event sponsored by The New York Times, the first in a series of talks held on college campuses to foster discussion about important issues, Times reporter John Eligon (Medill ’04) said. The Medill School of Journalism, Media, Integrated Marketing Communications hosted the event.

Noah reflected on his experience growing up in apartheid and compared how South Africa and the U.S. deal with race.

He took questions from Eligon, who asked him to begin by reading a passage from his memoir, “Born a Crime: Stories From a South African Childhood.”

In the passage, Noah wrote about being placed in a challenging academic class of mostly white peers, but he wanted to join a class of black peers. Noah said he chose the second class because he felt more comfortable, defying advice he received from his school.

Medill sophomore Selah Holland told The Daily that Noah’s story about having to choose between two parts of his racial identity resonated with her because her mom is white and her dad is black. Holland said the discussion was productive because of Noah’s popularity.

“Having a TV personality like Trevor Noah definitely brings more people in,” she told The Daily. “It makes people more interested as opposed to somebody less known. It’s really great that non-marginalized groups — white people — sit and listen to perspectives like those of Trevor Noah.”

Noah urged white people to have conversations about race, though it may be frightening and uncomfortable. Good can come from Donald Trump’s presidency, he said, because it exposes racial tensions and gives people the ability to “see how bad things really are.”

“He did a very good job of speaking to anyone and everyone,” Miller said. “It was very interesting to watch that play out.”

Noah gave advice to students studying to become journalists, saying they would be especially important during the era of “fake news.” He said some countries try to convince people that “there is no such thing as real.”

“There is real; there are facts,” Noah said. “If you’re getting into the field of journalism, just believe in that. Keep hammering home those facts …They will come to your aid.”