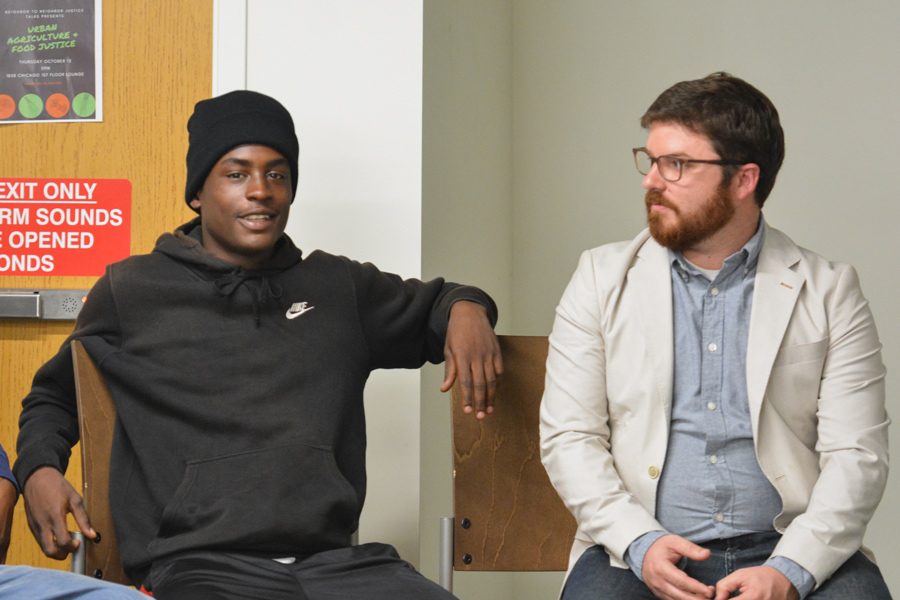 Jatwaun Smith and Peter Hoy speak at a Justice Talk on urban agriculture and food justice. Smith and Hoy discussed their work with Chicago organization A Just Harvest, one of the partners of the University’s new Neighbor2Neighbor program.

Food insecurity and waste intertwine with other issues of equity, said Peter Hoy, director of economic and work development for A Just Harvest, a nonprofit committed to ending hunger in Chicago.

“Someone that can’t work is someone that’s going to be hungry,” Hoy said. “We’re trying to end hunger and empower folks to meet their needs.”

Hoy spoke with more than 10 people Thursday at 1838 Chicago. The event was part of the Justice Talks series sponsored by NU’s Office of Leadership Development and Community Engagement.

Beyond working to feed those who are food insecure, Hoy said A Just Harvest advocates for food justice policies in Chicago.

One of the organization’s initiatives is The Genesis Project, a 10-week internship that lets young people work in a community garden in Rogers Park, Hoy said. After interning, participants spend a year working with the project and the Howard Area Community Center to continue preparing for employment. Hoy said The Genesis Project is currently full and has a waitlist of about 20 people.

One of the interns, Jatwaun Smith, said he enjoys planting and harvesting in the garden.

The organization is currently creating a democratic business model, Hoy said, to empower workers to own and operate their own garden. Many of the interns never graduated high school or are felons, Hoy said.

Other programs within A Just Harvest include The Community Kitchen, which partners with grocery stores that donate unused produce as part of the food rescue program. Hoy said the kitchen feeds about 180 people a day across 50 zip codes in the Chicago area.

During the event, SESP sophomore Arzu Singh said she was impressed by the organization’s commitment to utilize local resources to prepare community members for employment.

“You’re using things the community already has, which is people, land, effort and community,” Singh said. “Those things already existed and you’re putting them together in a really productive way.”

Val Buchanan, NU’s assistant director of leadership development and community engagement, told The Daily that the nonprofit is a community partner for NU program Neighbor2Neighbor. The new initiative aims to connect NU students and Rogers Park residents, she said.

“I live in this neighborhood, so I have a personal investment in connecting this neighborhood with our campus community,” Buchanan said. “We’re trying to take different justice issues and start conversations about them.”