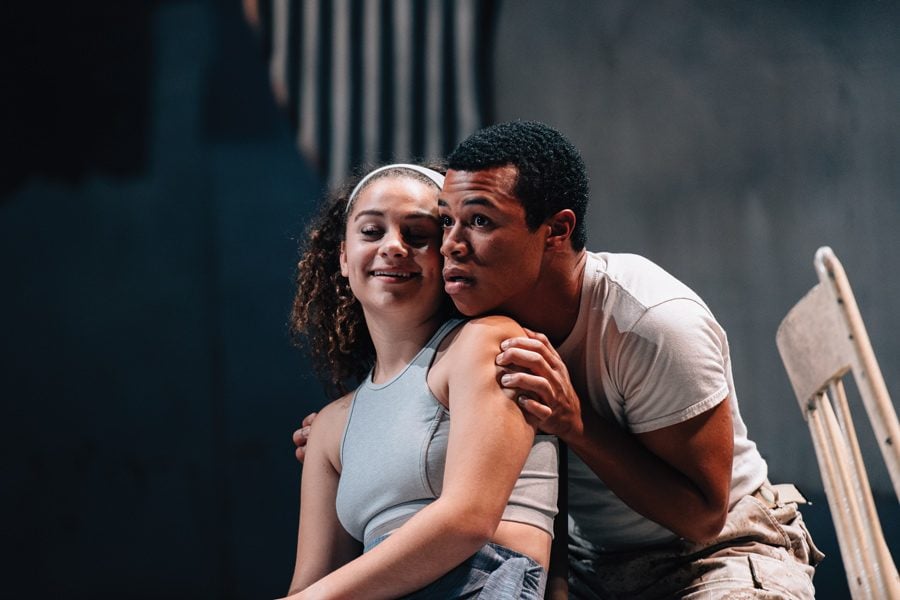 Performers rehearse for the upcoming production of “In the Red and Brown Water.” Northwestern’s first fall mainstage production premieres Thursday in the Louis Theater.

When Tarell Alvin McCraney, the Academy Award-winning screenwriter of “Moonlight,” was a student at DePaul University, Communication Prof. Henry Godinez was one of his acting teachers.

Some 15 years later, McCraney and Godinez are reuniting outside of class, this time with Godinez directing one of McCraney’s plays for Northwestern’s fall mainstage show.

“Tarell’s always been such an incredibly multi-talented artist and just an incredible human being,” Godinez said. “For me to be able to be involved with this play is really cool and gratifying, and I’m really proud.”

“In the Red and Brown Water,” the first play of “The Brother/Sister Plays” trilogy, premieres Thursday at the newly renovated Josephine Louis Theater. The play tells the story of Oya, a high school track star who has the chance to escape poverty with a full scholarship to college but chooses to stay home to take care of her mother instead. Throughout the play, Oya deals with love and loss and faces the consequences of her decisions.

The production will run for three weeks as part of the 2017 Black Arts Initiative International Conference, a series of events to promote black art and performance pieces. McCraney is also scheduled to speak at the conference.

Godinez is co-directing the show with Jerrell Henderson (Communication ’15), who graduated with a master of fine arts in directing. Henderson said he is a fan of McCraney’s work and has read “In the Red and Brown Water” several times.

“It’s a really, really fantastic play,” Henderson said. “I’ve never got to work on a play by Tarell McCraney before even though I’ve read a lot of his plays. It’s easy to say yes when it’s a script that you’re excited about.”

Henderson added that he is excited to be a part of this production because it highlights the stories of several black characters, portrayed by a predominantly black cast. He said “In the Red and Brown Water” features complex characters, like that of Oya, and an empowering script.

Communication senior Lily Santiago, who plays the lead role of Oya, said it is rare for a NU production to feature actors of color. She said she appreciated how McCraney’s characters pop from the page.

“I was intimidated but excited because Tarell’s words are just so poetic and beautiful, so it’s a little intimidating to be like, ‘Woah, he might come see this (performance),’” Santiago said.

Although Oya is the protagonist of McCraney’s play, Santiago said the production relies on the ensemble because community is a vital part of her character’s journey.

Henderson said the audience will be able to relate to the play’s themes because Oya faces many obstacles when trying to figure out how she fits into the world.

“You fight or you push for what you want your life to be,” Henderson said. “That’s something that the main character does throughout the play. … She gets back up off her feet and continues to push forward even into the end of the play. I find that very inspiring, and I hope other people do as well.”