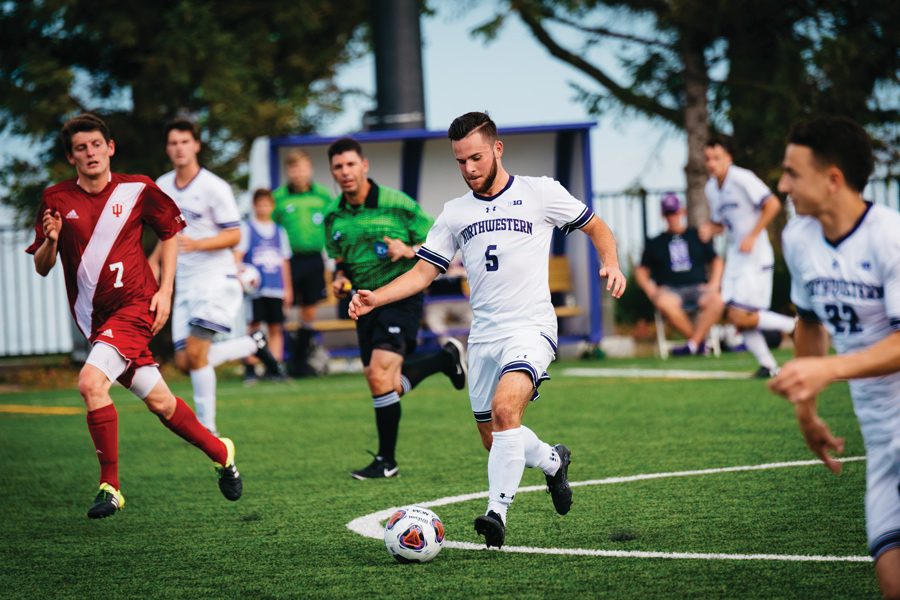 Camden Buescher kicks the ball. The junior midfielder and the Wildcats got wins against both Western Illinois and DePaul.

Not on the season, though the Wildcats were 2-9 entering the week. Not after a devastating overtime loss to No. 9 Notre Dame. Not in the 40th minute of Wednesday’s game at DePaul, when senior forward John Moderwell was sent off on a red card.

“We played very, very smartly and together,” coach Tim Lenahan said. “Against DePaul we only had 13 field players. For half a minute there at the end of the first half, to kind of slow the game down, we had our backup goalkeeper dressed as a forward.”

After suffering a loss as crushing as the Cats’ in South Bend, nobody outside the program would have blamed the team for a lackluster showing in its next outing. Instead, NU came out firing, putting three goals past the Leathernecks in the first half to take a 3-0 lead.

Freshman midfielder Drew Viscomi, senior forward Elo Ozumba and junior midfielder Camden Buescher all scored in the opening frame to give the Cats a commanding lead.

“We knew we were going to attack,” Lenahan said. “We came out with a more attacking lineup. If we played that way against Maryland, it would probably be 5-0 Maryland in the first half. I think our lineup caught them off guard a little bit, and we were able to get three goals.”

Western Illinois scored two goals back in the second half, but the visitors’ comeback fell just short thanks to junior goalkeeper Robbie White, who made six saves on the day.

With new momentum, NU rolled into DePaul eyeing a winning streak, but when Moderwell was sent off just before the end of the first half, DePaul upped the pressure and nearly scored before halftime.

The Cats, however, refused to roll over. They came out firing in the second half and controlled play in the opening minutes of the period.

After NU won a corner kick, DePaul defender Caleb Pothast fouled Ozumba in the box, and Buescher converted the ensuing penalty kick to give the Cats a surprising 1-0 lead.

“At halftime, people were asking me where I’d go if I got a PK and I was telling them down the middle,” Buescher said. “I’ve been pretty comfortable going down the middle because I’ve done it before, so I just decided to go back to it.”

Down a goal but still up a man, the Blue Demons increased the pressure, taking five of the game’s next six shots.

But the NU defense held strong, and, in the 69th minute, when Viscomi hit sophomore forward Mac Mazzola at the top of the box, Mazzola faked left, stepped back onto his right and fired a cracking shot past the DePaul goalkeeper to double the Cats’ cushion.

“Today was a very joyful win,” Lenahan said. “It was great to watch that group work together, compensating for the lack of a player. Everybody was working hard for each other.”