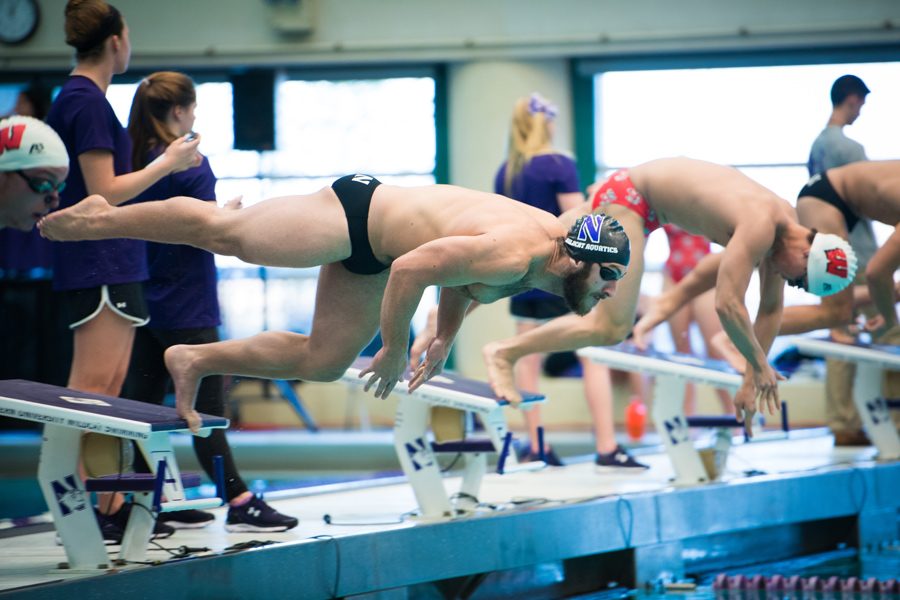 Nick Peterson takes off from the blocks. The senior will bring veteran leadership to a young Northwestern team this season.

Winless in conference dual meets since January 2014, Northwestern will turn to a strong freshmen class as it looks to improve its fortunes this year.

The Wildcats finished ninth at last season’s Big Ten Championships, but with eight freshmen set to join the roster, some swimmers are optimistic about the team’s chances in coach Jarod Schroeder’s ninth season, which begins Wednesday at Eastern Michigan.

“Some of these freshmen can be real contributors this week,” senior Almog Olshtein said. “We definitely need them to be on top of their game and show us what they got.”

The freshmen have big shoes to fill, after U.S. Olympian Jordan Wilimovsky’s graduation in the spring. Wilimovsky finished fourth in the 1,650-yard freestyle at the 2017 NCAA Championships.

The influx of freshmen replaces just two departing seniors, which gives NU increased depth and a variety of options as it looks for a boost in the coming year. But the roster is still smaller than other Big Ten schools, senior Jonathan Blansfield said. He added that the team’s small size helps create cohesion.

“The unity that we have on our team is something that we’re going to need to rely on,” Blansfield said. “The upside to (being a small team) is that we are really close, we have each other’s backs. We all know our strengths and weaknesses and how to best perform as a unit.”

The Cats won their first four matchups last season, but struggled mightily thereafter, dropping eight of their final nine dual meets. NU again faces an uphill battle with this year’s formidable schedule, which includes meetings with No. 7 Georgia, No. 11 Missouri, No. 20 Minnesota and No. 23 Wisconsin.

While ranked opponents stand out, Blansfield said no team on the schedule should be taken lightly as the Cats look to improve on last year’s disappointing campaign.

Junior Will Hofstadter said distance events could be an advantage for NU this year, especially among the freshmen. But the team will face early depth issues in the diving slate, entering the year with just two returnees. One of them, junior Ben Magliato, is currently struggling with a concussion, Blansfield said.

But Blansfield said the smaller roster and depth concerns will give newcomers opportunities early on. And in preparation for the upcoming campaign, Hofstadter said the team has addressed issues that doomed it last year.

“We’ve struggled in the past with some motivation and energy,” Hofstadter said. “That’s something we’ve really been working on during the preseason. I think we’re going to be doing a lot better with that this year.”