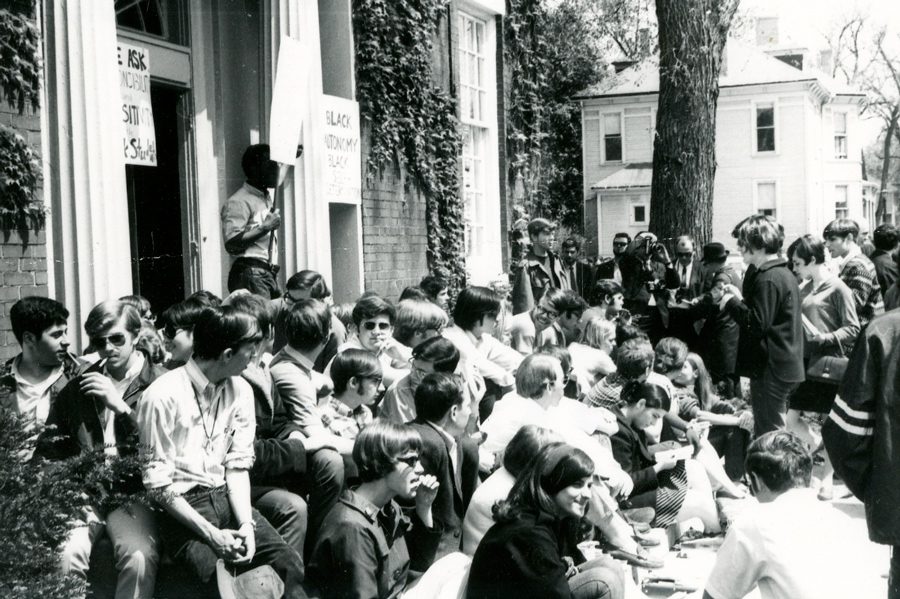 Students occupy the Northwestern Bursar’s office in May 1968 for a 38-hour peaceful protest. Current students and alumni gathered at the Black House Friday to commemorate the protest’s 50th anniversary.

In May 1968, approximately 100 students occupied the Northwestern Bursar’s Office and presented a list of demands to the University — an event that left a lasting legacy on the black student experience at NU, said Jeffrey Sterling (Weinberg ’85), president of the NU Black Alumni Association.

“The actions of those individuals in 1968 really represents a line in the sand, a starting point for when the University really began … engaging in meaningful growth,” Sterling said. “Now, everyone is able to have a voice and contribute to the ongoing evolution of the University.”

Hundreds of students and alumni — including some participants from the historic sit-in — gathered at the Black House on Friday to kick off a series of events commemorating the protest’s 50th anniversary, Sterling said.

Students led the 38-hour peaceful protest after the University failed to meet a list of black students’ demands, which included calls for NU to desegregate its real estate holdings, admit more black students and add a program in black literature, history and art, The Daily reported in 1968.

Students originally presented these demands on April 22, 1968, but when they could not reach an agreement with administrators, they took over the Bursar’s Office — now part of the Office of Treasury Operations — on the morning of May 3.

The sit-in played a major role in the creation of the Black House and the establishment of an African American Studies program, Sterling said, and “set the stage” for future groups to voice their concerns. To commemorate the landmark anniversary, he said NUBAA and the University will hold programming throughout the academic year. He added that a special slate of events is scheduled for May 3-6, aligning with the protest’s anniversary.

The May weekend will feature about 15 related events, Sterling said, including a procession across campus and a symposium headlined by University President Morton Schapiro and some of the original protesters. NUBAA will also premiere “The Takeover,” its documentary about the protest.

This year, the University will also expand its archives on the protest and on the black student experience, said Charla Wilson, who was hired as NU’s first archivist for the black experience in May. Wilson said she is working with NUBAA to create a digital exhibit on the Bursar’s Office sit-in — which is expected to launch in February — as well as physical exhibits in Deering Library and Dittmar Gallery.

“Fifty is one of those numbers you just can’t ignore,” Wilson said. “What’s great about dates like that is it allows us to reflect on the past and see how far we’ve come, or how much further we need to go.”

All undergraduate and graduate schools at NU will create their own inventories of documents and information about the black student experience, Wilson said. Because the schools are so varied, she said, it will be valuable for them to investigate their separate histories.

Kasey Brown, president of For Members Only, NU’s black student alliance, said the group is working with NUBAA to plan the year’s events. She said FMO hopes to educate “not just black students, but all students” on the significance of the Bursar’s Office sit-in and honor the contributions of the original protesters.

“It’s very important that, one, we go and celebrate them, and also let them know that we appreciate all the efforts that they’re doing,” the Weinberg senior said. “We’re still fighting … to keep everything they were fighting for alive.”

Many of the protesters have not returned to campus since they graduated because their experiences at NU were “not the best,” Wilson said. Bringing them back to speak for the sit-in’s commemoration is a way to give them a voice and validate their stories, she said.

Sterling said he sees the events as an opportunity to celebrate the progress NU has made since the protest. Now, he said, the University is actively working to improve the black experience and move toward the ideal of “one Northwestern” — instead of the “several Northwesterns” that existed on the divided campus of 1968.

However, many of the demands made in 1968 have still not been met, Brown said. The University should “keep making black students a priority” by increasing black enrollment and providing additional resources to black students, she said.

“Even looking at the current political climate right now, it’s kind of amazing, or maybe I should say disappointing, to see how far we have not come in 50 years,” Brown said. “Not only just at this university, but as a nation.”

Still, Brown said the commemoration should not focus on what the University should change. Instead, it should unite the black community and the wider NU community, in the spirit of the 1968 protests.

“The community needs to come together during a time like this,” Brown said. “For black students to have other people to lean on (and) for allies to come and see that we aren’t fighting just to fight — we’re fighting because change needs to happen.”