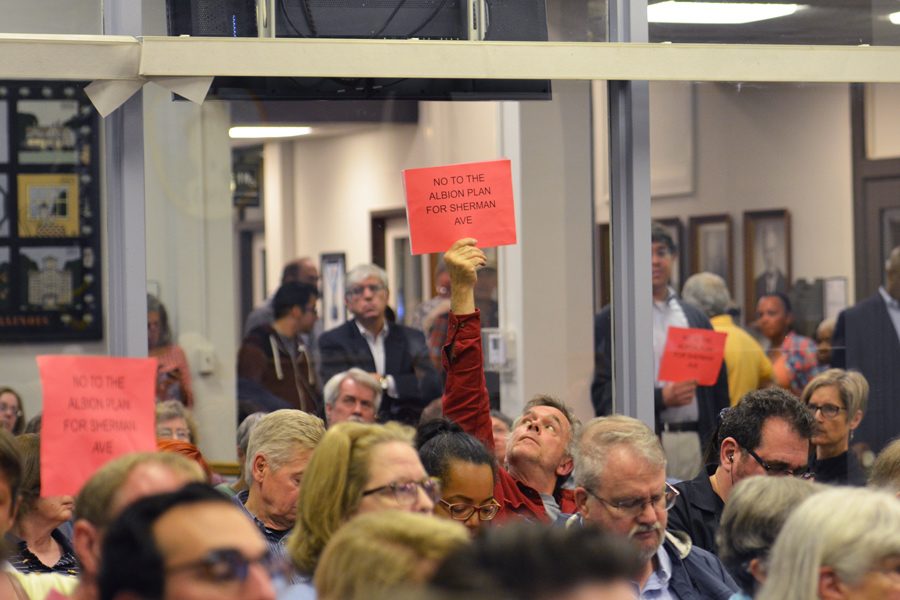 A resident holds up a sign opposing Albion’s proposed apartment tower. The development has caused controversy in Evanston.

After hours of discussion, aldermen tabled a decision Monday on Albion Residential’s controversial proposal to construct a 16-story apartment tower on Sherman Avenue.

At the City Council meeting, officials cited concerns over the tower’s size, location and aesthetic appeal, and agreed they needed more time to review information about the building before voting.

Ald. Melissa Wynne (3rd) said while there are positive aspects of the proposal — like the addition of more affordable housing to the downtown area — she worries the length and width of the site will “create a wall.” She said the decision on this plan will set a precedent for future development.

“This then demonstrates what the city will approve, which then changes the land price throughout Evanston,” Wynne said. “I don’t want to send that signal. I want to send a signal that shows that we want a different mix of affordable housing.”

The building would add 286 residential units — 15 of which will be set aside as affordable housing — and 186 parking spaces to the Evanston community. It would be erected on the lot currently housing Prairie Moon and Tommy Nevin’s Pub.

Robert Strom and Rohit Sahajpal — who own Prairie Moon and Tommy Nevin’s Pub, respectively — both said during public comment that they supported the new construction.

Representatives from both Albion Residential and an opposing citizen-formed group, “Evanstonians for Responsible Planning,” debated the project’s merits to the council in 15-minute presentations.

Clare Kelly, who represented the citizen group, said the development would undermine a sense of community, threaten fairness in housing for residents and negatively impact the downtown area’s aesthetic appeal.

A Change.org petition, started by Evanstonians for Responsible Planning, calls on the city to stop the “mega-development on Sherman” and had received more than 1,850 signatures by Tuesday evening.

More than 30 people spoke during the public comment portion of Monday’s meeting, many of whom wielded red signs that read, “NO TO THE ALBION PLAN FOR SHERMAN AVE.”

Wendy Pollock, who lives near the proposed building, said she was “strongly opposed” to the development because it is too big and “out of scale.” She said the 2009 Downtown Evanston Plan — which outlines the development and use of property in the downtown area — is not being followed when making decisions.

“The process has been really questionable,” Pollock said. “If we have a (development) plan, as others have mentioned, how did we end up here with something that’s so out of keeping with the plan?”

City officials said last week that the perceived deviation from the 8-year-old development framework stemmed from its lack of alignment with expansionary goals.

Some citizens, however, said they supported the residential construction. Resident Jennifer Grandy said the vibrant, walkable downtown area was one of the reasons she decided to move to Evanston.

“Economic vibrancy does not happen in a vacuum,” Grandy said. “We need people to sustain it.”

Yule said Albion will also aim to hire local residents and that the company would host training workshops focusing on construction, engineering and architecture for Evanston Township High School students.

“We are committed to Evanston,” Yule said. “We’re going to be here for the long haul. We want to be part of the fabric of Evanston.”

While many council members said they needed more information before making a decision, Ald. Ann Rainey (8th) said the project was “fabulous” and that the “good outweighs the bad” in terms of public utility. She said the city shouldn’t turn down the opportunity and criticized the “taste police” who simply didn’t like the tower’s design.

“To dismiss the idea that there are 15 units of affordable housing here I think is deplorable,” Rainey said. “This is a historical event.”

Albion’s proposal will next be discussed at the Planning and Development Committee meeting Oct. 23.