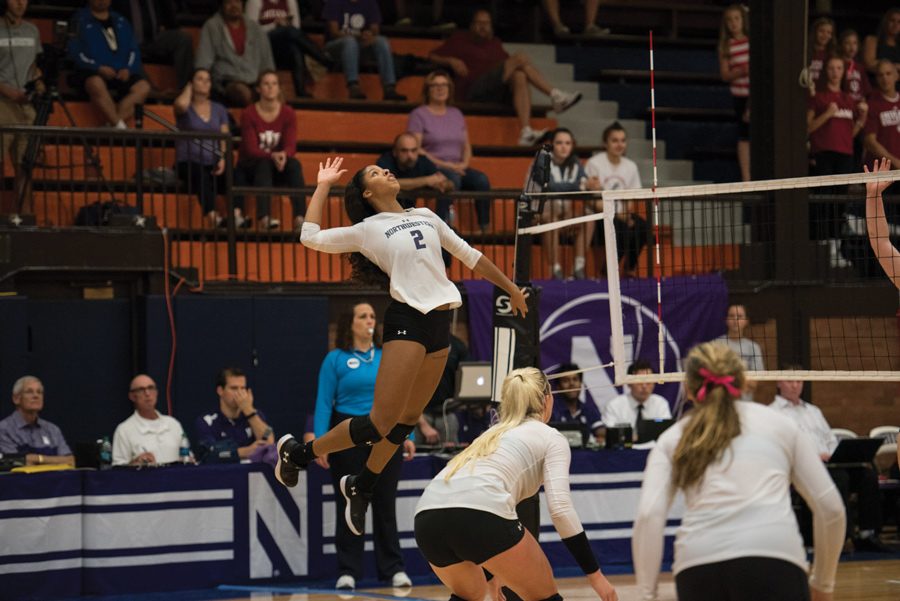 Symone Abbott goes up for a kill. The senior outside hitter had a career-high 29 kills in Friday’s win over Indiana.

Throughout the season, Northwestern has struggled to hold early leads. So it wasn’t surprising when the Wildcats blew multiple first-set advantages this weekend.

“We got so far ahead that we felt uncomfortable because we aren’t usually that far ahead against teams like Purdue, and it was too good to be true,” senior outside hitter Symone Abbott said.

Against the Hoosiers, the Cats (12-6, 2-4 Big Ten) led 21-14 in the first set, but Indiana went on a 6-1 run before NU won the frame. Coach Shane Davis credited his team’s lack of errors for the early cushion.

The Hoosiers (11-7, 0-6) won a seesaw affair in the second set in which neither team led by more than three points. The Cats’ hitting percentage dipped to .156 in the third set, and Indiana capitalized, taking a 2-1 lead.

Still, Abbott did her part to help NU overcome its mid-contest slump. With the Hoosiers ahead two sets to one, the outside hitter landed a precision swing between a pair of Indiana defenders who could only watch it fall to the hardwood. The kill tied the match for the Cats who had set point eight different times in the frame.

“Awesome, really,” Abbott said of the play. “I couldn’t even cheer because I was super tired. But just to see it fall and get everyone excited, it was super awesome.”

After winning the fourth set, NU jumped out to a 4-0 lead in the fifth, and never let its edge dip below three points. Senior middle blocker Gabrielle Hazen had the winning kill for the Cats, after which she was mobbed by teammates on the court.

Davis said in the past, the Cats might not have rebounded the way they did against Indiana. But NU got the job done, and Davis said Friday’s match might be a moment the Cats look back to as one where they grew as a team.

“It’s big because we haven’t done that as a team,” Davis said. “When we get down, we stay down, and to be able to do that, it was just great to see our group battle back and get over that hump and push it to five and have that opportunity.”

Despite surging back against the Hoosiers, NU failed to replicate that success against the Boilermakers (15-2, 5-1).

Hazen paced the Cats with seven blocks, while freshman opposite hitter Danyelle Williams and freshman middle hitter Alana Walker tallied three each. Abbott chipped in with 10 kills, and Robinson added eight. Tashima led NU with 29 assists and seven digs in the straight-set loss.

Even with the disappointing performance Sunday, Hazen said the Cats still felt good about their weekend overall.

“Getting the win against Indiana was a great confidence booster that we can fight back, and we can win those matches and just hang with the Big Ten,” Hazen said. “We have to start believing we don’t have to be that Cinderella story, that we can hang with these teams and be competitive with them.”