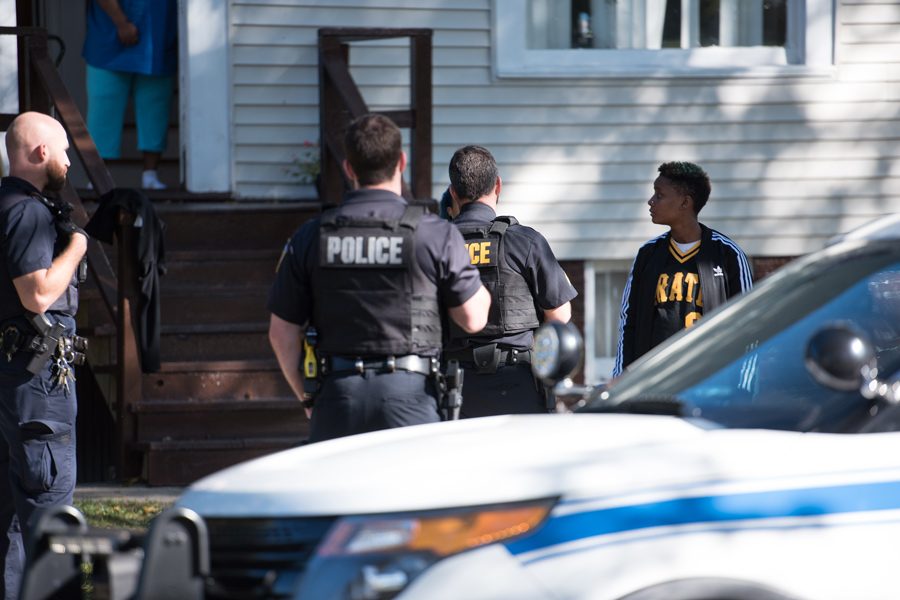 Several community members stand outside a home on Hovland Court in west Evanston. A 19-year-old Evanston woman was charged with battery in the 1800 block of Hovland Court after allegedly punching a Skokie woman in the face.

A 31-year-old Chicago man was arrested Saturday night in south Evanston in connection with possession of a controlled substance.

An Evanston Police Department officer was driving near the intersection of Sherman Avenue and Lee Street when he noticed a car without its headlights on, Evanston police Cmdr. Joseph Dugan said.

The officer conducted a traffic stop and noticed a strong odor of marijuana upon approaching the car, Dugan said. The man did not have a driver’s license on him, Dugan said.

The officer found a clear plastic bag with several white, rock-like substances that were individually wrapped, Dugan said. The officer also found a pill bottle, which contained an unidentified red pill, in the side of the driver’s car door.

The pill was sent to a lab for testing, Dugan said. The man was charged with possession of a controlled substance and also given traffic tickets for driving with a suspended license and driving without his headlights on.

A 19-year-old Evanston woman was arrested Sunday in west Evanston in connection with battery.

A woman and her friend drove up to a house in the 1800 block of Hovland Court, Dugan said. Several women exited the house — including the 19-year-old — and the woman driving the car then got out of the vehicle. When the driver realized a verbal altercation was about to happen, she called the police, Dugan said.

The driver returned to the car, but another woman –– who had exited the house –– tried to pull the driver out of the car by her shirt, Dugan said. Police were called and the driver and her friend tried to drive away, but the group of women from the house followed them down the street.

Right before police arrived, the 19-year-old resident punched the driver in the face, Dugan said. She was charged with battery. There were no other visible injuries, Dugan said.