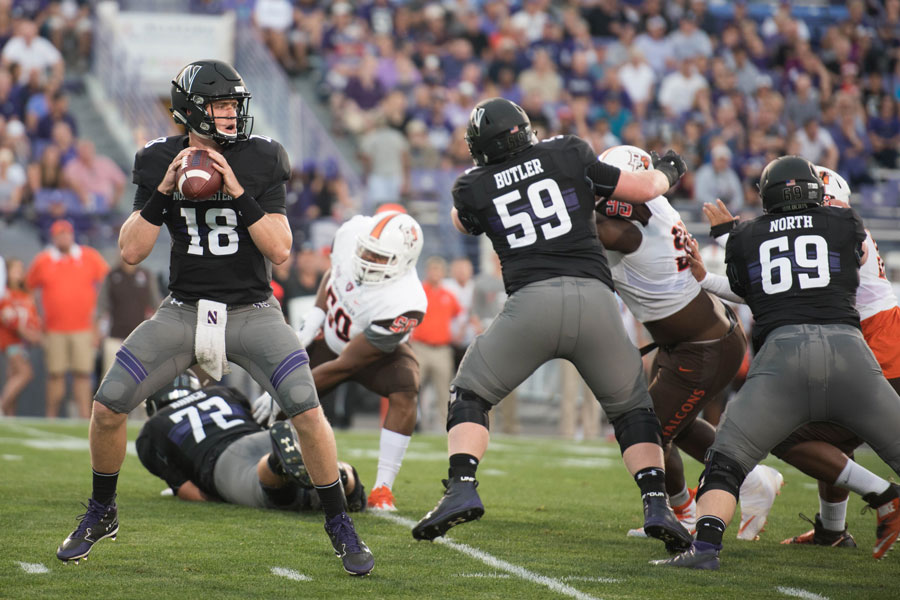 Asked this week what position has made the least progress so far this season, Pat Fitzgerald didn’t answer directly.

“I really thought we would be better running the football at this point,” the coach said. “That’s not on one group. That’s collectively as an offense.”

But Northwestern’s rushers have faced extenuating circumstances, with senior running back Justin Jackson hampered by injury and large deficits against Duke and Wisconsin forcing the Wildcats (2-2, 0-1 Big Ten) to abandon much of their running game. NU’s long-suspect offensive line does not have such excuses, hitting its nadir by allowing eight sacks against the Badgers and now facing another test against No. 4 Penn State (5-0, 2-0) on Saturday.

The line’s struggles are not entirely surprising given years of issues, relatively few fresh faces and a wide-open right tackle position. Last weekend in Madison demonstrated the group’s floor: The eight sacks of junior quarterback Clayton Thorson were the most in a single game in his career, and, excluding sacks, NU rushed for just 81 yards.

“We have to execute in the running game, protect Clayton, and we failed to do that,” junior right guard Tommy Doles said. “It’s really frustrating when you see that. Especially a lot of things that we worked on in practice, mistakes (that we made).”

Mistakes were a common theme as players and coaches rehashed the 33-24 loss: Freshman right tackle Rashawn Slater mentioned “some one-man breakdowns” of his, Fitzgerald pointed to “a couple communication breakdowns” and offensive line coach Adam Cushing lamented that his unit was “not consistent enough … not physical enough.”

Fitzgerald has stuck up for the line at times in the face of heavy criticism, pointing to Jackson’s conference-leading 1,524 rushing yards in 2016 as evidence of its successes. But this season, even the rushing attack has sputtered: The Cats are averaging a paltry 3.4 yards per carry.

“There are some things that I know we have improved on from last year,” Doles said. “Then there are some mistakes there that we continue to make, too.”

Doles pointed to increased depth on the line as a positive from last season, which has manifested itself primarily in a complicated rotation that gives up to seven linemen regular playing time.

For example, last season’s starting left tackle, junior Blake Hance, lost that job ahead of training camp but then assumed the starting left guard position. However, he also serves as the backup left tackle and has seen time at that spot when sophomore Jared Thomas has struggled. Thomas, himself a converted interior lineman, appeared at right tackle for some drives again Wisconsin.

Fitzgerald said throughout training camp that if linemen played well enough to seize starting roles, the rotation would dissipate. That has still not happened, potentially a worrying sign for a unit in which continuity is often prized.

“I don’t think it’s a problem,” Cushing said, defending the rotation. “Really the inconsistencies have stemmed from not good enough play by those guys that are rotating.”

Penn State’s defense is not as stout as Wisconsin’s, but NU’s front faces another large challenge. The Nittany Lions have given up just 33 points in two conference games and allowed only 82 rushing yards to a run-happy Iowa team two weeks ago.

That could spell trouble for a Cats line that has shown little evidence of recent improvement.

“There’s a lot of work left to do,” Doles said. “I wish we would’ve gotten to a better point before the Wisconsin game. But here we are.”