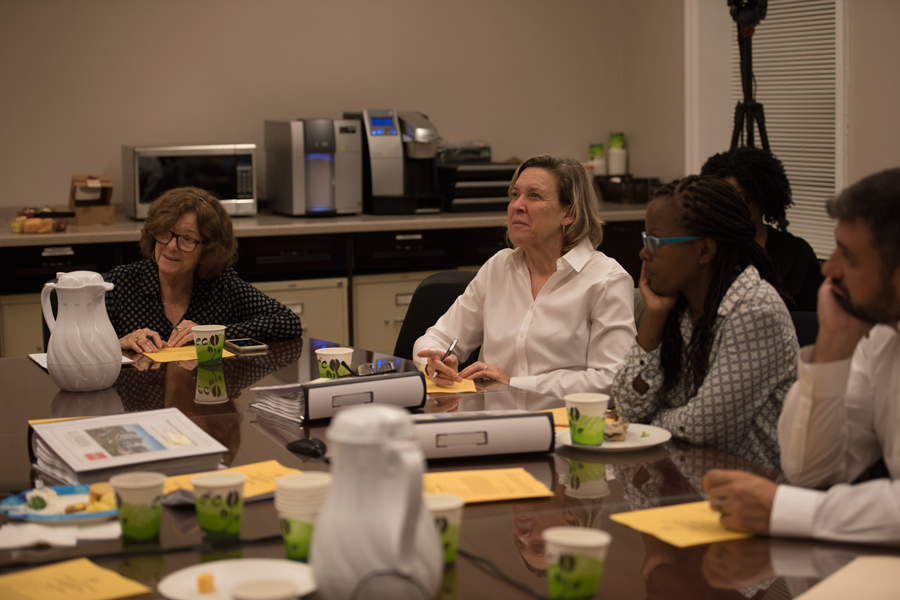 Aldermen sitting at a table during a meeting. Members of the Housing, Homelessness and Human Relations Commission complained at a Thursday meeting that aldermen do not clearly direct them on addressing affordable housing.

Members of the Housing, Homelessness and Human Relations Commission said Thursday that City Council does not provide clear direction to address affordable housing.

The complaints come shortly after aldermen rejected a commission proposal to fund an affordable housing development in the 2nd Ward. Council criticized the plan due to concerns that Evanston residents would not be able to access many of the units.

However, commission chair Ellen Cushing said the affordable housing policy discussion is too “open ended” and that council members should give staff more guidance on the issue.

“(Aldermen’s) role is to take the leadership role to come up with a vision to set some overarching policies,” Cushing said. “And from that leadership position, they can direct staff.”

Commission members discussed writing a letter to City Council to voice their suggestions along with concerns that officials do not appreciate their time and work.

Besides attending to affordable housing issues, the commission drafts memos detailing other housing matters for City Council to consider — oftentimes after aldermen request them. But Savannah Clement, Evanston’s housing policy and planning analyst, said council “takes for granted” the process preceding the memo that is given to it.

Clement suggested that the commission include a reminder of how long this process takes in its letter.

Ald. Eleanor Revelle (7th), who also sits on the commission, said she agreed in part with other members. She said City Council is “oblivious” to the work done because the commission doesn’t frequently update council with its progress.

However, Revelle added, this is an issue council has with most of the city’s commissions.

“We get a 500-page packet, we get all these memos,” Revelle said. “It doesn’t mean what you’re doing isn’t important. It just means it gets to council, they read the recommendation (but) they don’t focus on the fact the commission has been talking about it.”