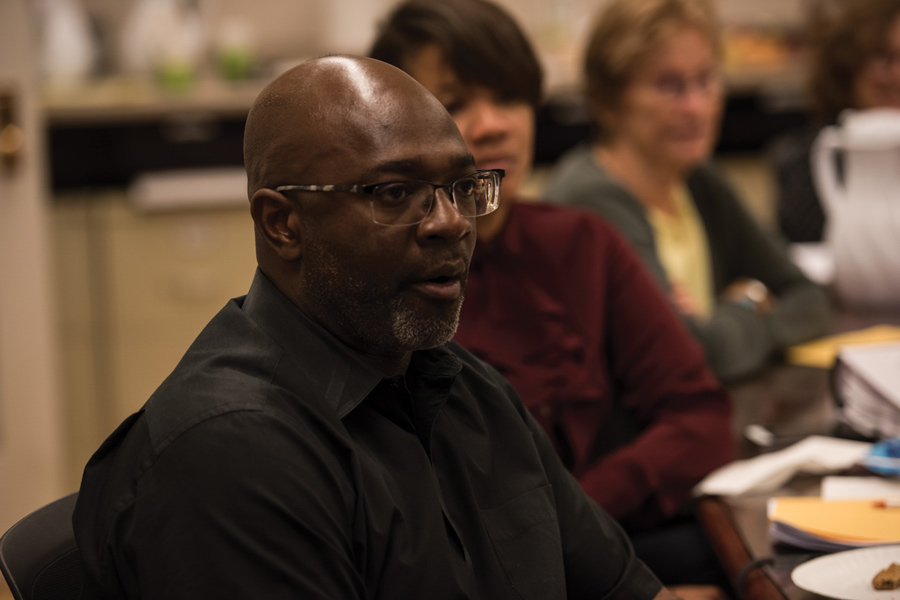 Ald. Peter Braithwaite (2nd) speaks at City Council’s equity training on Wednesday. After months of discussion, aldermen and city officials held the training to learn how to communicate with the community’s vulnerable populations.

After months of discussion, Evanston officials held their first equity training Wednesday night to learn how they can best empower local residents.

City Council met at a roundtable with two officials from Indiana University-Purdue University Fort Wayne. The IPFW administrators provided leadership tools for city officials, with the goal of increasing the community’s equitable access to council members.

Kristina Creager, assistant vice chancellor for student success and transitions at IPFW, told aldermen to focus on strategies such as expanding one’s “constellation of input” and taking responsibility for any mistakes.

Creager said while leaders need “accountability partners” — people who call them out on their mistakes and push them to be more inclusive — it also takes significant self-awareness and emotional intelligence to address equity issues.

Kenneth Christmon, associate vice chancellor for admissions at IPFW, echoed Creager, saying diversity trainings generally do not work without the right mindset. He said when conversations get too difficult, people often become defensive, but public servants do not have time for this reaction.

“Are you going to be different after you leave here tonight?” Christmon said. “You can be, but most people will leave here with their bias.”

Since hiring Patricia Efiom as the city’s equity and empowerment coordinator in February, city officials have been discussing the importance of civic empowerment across Evanston, she said.

Efiom opened the Wednesday night presentation and said aldermen need to learn how to welcome underrepresented voices instead of speaking for them. She added that they should focus on moving away from “Band-Aid fixes” to creating solutions that address the root of inequity.

After the presentation, Ald. Peter Braithwaite (2nd) said he was grateful for the training. He said city manager Wally Bobkiewicz fought hard for City Council’s commitment to addressing equity.

“I definitely came in with my biases,” Braithwaite said at meeting. “Thank you for acknowledging that. I needed this reminder. As leaders, we needed to be reminded.”

Still, Ald. Robin Rue Simmons (5th) said she sees some residents who thrive in Evanston and others who are “hopeless,” and because of that there is a lot of work to do. Wednesday’s meeting, she said, was only the first step in conversations to come.

“I honestly believe that the average (person) is well-meaning and has the same goal, but our perspectives are so different,” Rue Simmons said. “I appreciate the city manager’s commitment to equity and empowerment, but this presentation left a lot unsaid.”

Other city officials and the IPFW presenters agreed with Rue Simmons that the equity training is not enough on its own.

Turning to the future, Efiom said she plans to offer a series of “immersion experiences” to expose people to a different side of Evanston and expand a sense of community.

“I see this as an ongoing conversation,” Efiom said. “Our job as the city is to recognize where our people want to be empowered, then we open those avenues or doors.”