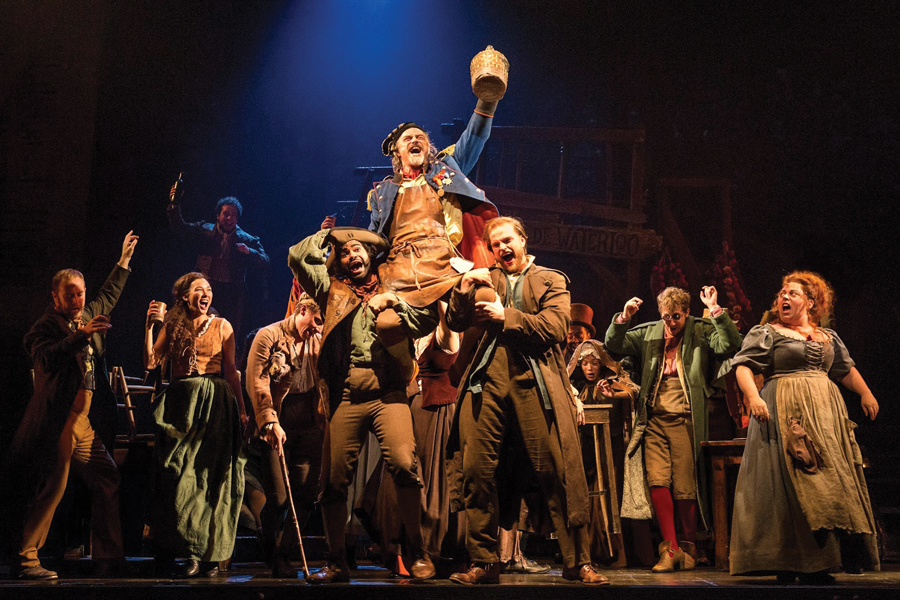 The company of “Les Misérables” performs “Master of the House” with J. Anthony Crane as Thénardier and Allison Guinn as Madame Thénardier.

Anthony Crane (Communication ’93) said he remembered seeing the Broadway production of “Les Misérables” for the first time as a teenager. Some 30 years later, he now has a very different view of the show — this time from the stage.

Crane is playing the role of Monsieur Thénardier in the Broadway national tour of “Les Misérables” that will visit Chicago’s Cadillac Palace from Oct. 11 through Oct. 29.

Crane, who has found professional success both on screen and on stage, said the casting director had been searching for a Thénardier for six months when they called him in for an audition. The casting director was so taken with him that Crane never even had to audition in front of the principal director, he said.

“I kept walking out of (the audition) thinking, ‘There’s no way they call me back,’” Crane said.

Thénardier is the wild, greedy villain of the musical, Crane said. He’s one of the most lively characters in the show, often breaking the convention of the fourth wall — a theoretical barrier separating performers from the audience.

“My enthusiasm kept reaching new levels when I realized that (Thénardier) has a complete engagement with the audience,” Crane said. “I’ve definitely always leaned toward playing the villain because I think I understand how to make pettiness highly motivated.”

Crane said he has significant experience playing clowns and conniving characters. He has performed in four Broadway shows so far, most recently “The Country House.” He was also Scar’s replacement in the 2002 national tour of “The Lion King.”

Crane added that his training and education at Northwestern had a “profound impact” on his professional career.

“It’s surprising, the further I get away from my drama school days, the more essential (the training) continues to be,” he said. “Those things that I learned at that age still remain very vital to me.”

NU is further represented in the “Les Misérables” tour by recent graduate Caitlin Finnie (Bienen ’16), who is the understudy for the character of Cosette.

Having the national tour as her first professional job post-graduation is “huge,” Finnie said

“‘Les Mis’ is one of my favorite musicals, so it’s probably the best option I could have asked for,” she said. “I love the show, I love the people doing the show. … I feel very lucky.”

Like Crane, Finnie is no stranger to the world of professional theater. During her senior year in college, she performed in the Lyric Opera’s production of “The King and I.”

Finnie also cited the training she received at NU as the foundation for her love of the performing arts and her strong work ethic.

“Moving to the city and just auditioning constantly is different than school because you don’t have people telling you what to do anymore,” she said. “Northwestern also taught me to just let go and play when you’re working and to have fun.”

Finnie spoke highly of Crane and called him “hilarious,” “playful” and “collaborative” in the role of Thénardier.

The tour began Sept. 21, and will run through next June. Crane said it is important to find ways as an actor to keep the show fresh while performing it day after day.

Crane said about half the cast is under 24 years old, so for many it is their first professional show. Although he has served as a mentor for many of these new actors, he said he also feels he’s constantly learning from them.

“You’re constantly in a place in a career as an actor where you’re learning something new or you’re helping someone learn something new,” he said. “(This production is) just a great thing to be a part of.”