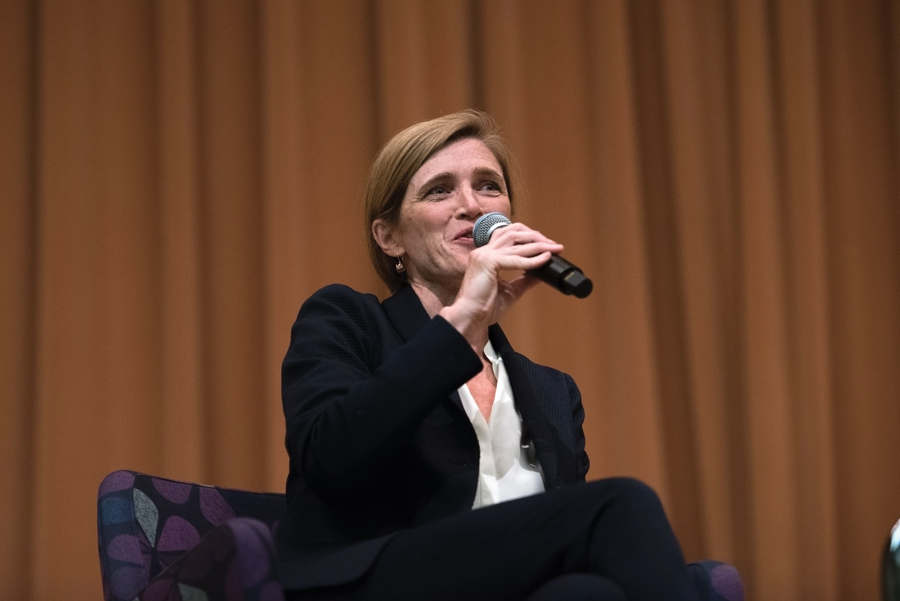 Former U.S. Ambassador to the U.N. Samantha Power speaks at an event in Technological Institute Monday. During the talk, Power spoke about her time as a diplomat and journalist.

Former U.S. Ambassador to the United Nations Samantha Power met with every other U.N. ambassador during her four-year tenure. She said about 45 had never been visited by one of her predecessors.

“The ambassador whose country is being torn apart cannot believe that the American ambassador is there,” Power said when describing her meeting with the ambassador from the Central African Republic. “Nothing to do with me, just that America has showed up to this little country. He just starts to weep, and I thought, ‘This is the power that we have in representing this country.’”

Power looked back on her career during a conversation Monday hosted by the Contemporary Thought Speaker Series, Global Engagement Summit and the political science department. In front of more than 100 people, Power discussed what led her into politics with political science Prof. Wendy Pearlman, who moderated the event.

Power emigrated from Ireland when she was 9 years old. She attended Yale University, later becoming a freelance correspondent during the wars in Yugoslavia in the 1990s. She said she was inspired to go overseas as a journalist after she opened The New York Times and saw a picture of emancipated men in Europe, reminiscent of the horrors of the Holocaust.

Weinberg freshman Esteve Botella i Valls told The Daily that the story behind Power’s career stuck with him.
“It was important that she placed idealism and the strive for human rights as an uttermost idea behind all of her experiences,” Botella i Valls said.

Power also served as a senior adviser to President Barack Obama during his 2008 presidential campaign, then as a member of the National Security Council.

When reflecting on her career, Power said she regretted that the U.S. couldn’t find a definite solution to conflicts in Syria. However, she pointed to U.S. leadership during the Ebola outbreak in 2014 as a time when “reason won over fear” and the government offered “concrete” solutions.

Power said she is working on a book tentatively called “The Education of an Idealist,” which will focus on her career before politics. In 2003, she won a Pulitzer Prize for her book “A Problem From Hell.”

Looking forward, she said the U.S. should avoid isolationism and instead accept its influential role in the world by participating in global organizations. As the future leaders of the world, Power said she encourages students to take the time to look at issues in-depth.
“When I say, ‘Know something about something,’ it is read those books and not just those tweets,” Power said. “If you’re learning about a country, try to learn about the language. … Just visit the country and get to know the people.”

Communication sophomore Sydney Monroe told The Daily that Power’s expertise and passion showed throughout the conversation, which lived up to Monroe’s expectations.

“She really wasn’t talking political jargon,” Monroe said. “She was really talking about the issues she cared about. She’s really passionate about genocide and humanitarian intervention, and that came through.”