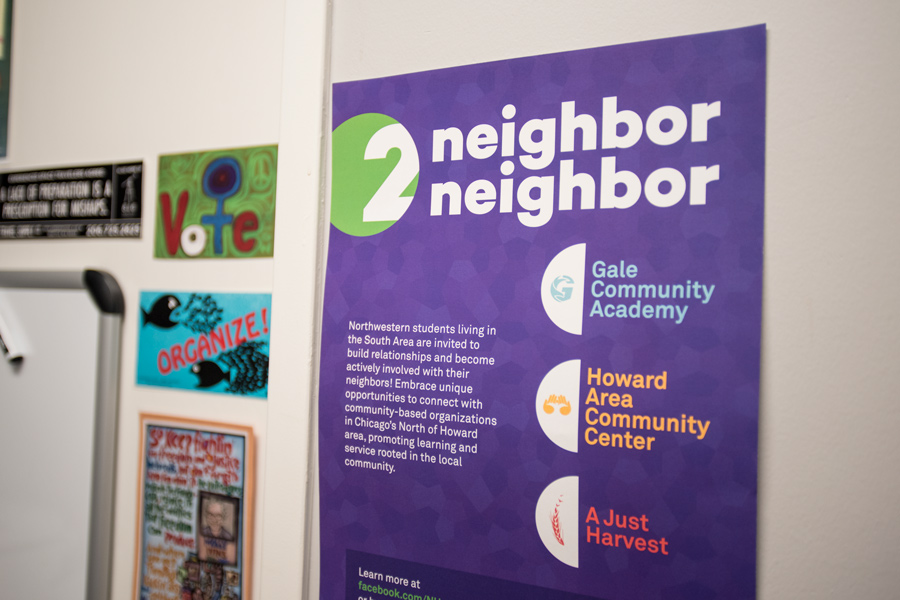 Neighbor2Neighbor partners with local organizations to provide students with volunteer opportunities. Northern Chicago can feel like “a world away,” said Val Buchanan, assistant director of the Office of Leadership Development and Community Engagement.

Although northern Chicago is less than three miles from Northwestern’s campus, it can often feel like “a world away,” said Val Buchanan, assistant director of the Office of Leadership Development and Community Engagement.

To build a relationship between students and the North of Howard area of Rogers Park, Buchanan and the rest of her office launched a new program, Neighbor2Neighbor, this quarter.

“We call ourselves Chicago’s Big Ten (school), but how much are students really understanding the history of Chicago, and our dynamics and history of racial housing segregation in Chicago and Evanston?” Buchanan said.

The program will feature conversations and dinners with community members from the North of Howard neighborhood. Zoey Meyer-Jens, who works in the Office of Leadership Development and Community Engagement, said the events aim to engage students and expose them to new perspectives.

Students will be able to attend these community dialogues, called Justice Talks, and host parents and students from the partner neighborhood at NU events. The program also transports students to help in a greenhouse and work at Gale in northern Rogers Park, Buchanan said.

The North of Howard neighborhood is the closest Chicago community to the Evanston campus school, Buchanan said. Many families relocated to this neighborhood from Chicago’s West Side after massive public housing demolitions, according to a programming proposal for Neighbor2Neighbor.

“It’s really important for students to be grounded in the community while going through college,” Meyer-Jens said.

SESP senior Katherine Ericson said she’s volunteered at Gale for several months. Though she hasn’t volunteered through Neighbor2Neighbor, she said her experiences made a “vague idea” of inequity and diversity more “concrete.”

“Northwestern students want to understand the community we are a part of and understand it from a larger perspective than just academic,” she said. “We benefit a lot from where we are located, and we can give back, but it’s a lot more than that. We can understand this community.”

Buchanan said about 100 students have already expressed interest in the program. While any NU student can volunteer, coordinators are targeting those living on South Campus due to its proximity to Rogers Park.

“We envision that the same kind of model could be expanded upon because we have many residence halls and we have many community agencies in Evanston and Chicago,” Buchanan said. “We’re trying to be a good neighbor as an institution.”