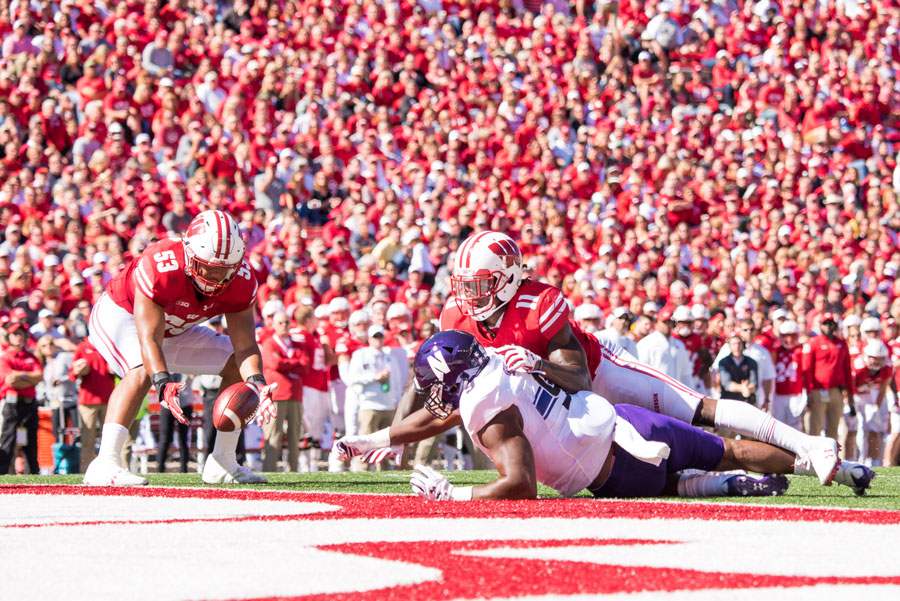 MADISON, Wis. — Northwestern appeared down and out with about 10 minutes left Saturday at No. 10 Wisconsin. Junior quarterback Clayton Thorson had just thrown a pick-six, putting the Wildcats in a 31-10 hole.

Then Thorson, after evading pressure, was tackled in the end zone on the second play of the drive. The late safety — the Badgers’ eighth sack of the day — sealed NU’s 33-24 loss and left Thorson with a bitter taste in his mouth.

NU certainly felt it played well enough to win a game it entered as heavy underdogs. A testy Pat Fitzgerald vented about missed opportunities and miscommunications, pointing to Badgers quarterback Alex Hornibrook’s 61-yard completion early in the third quarter as a prime example.

“To only have three points off turnovers in the first half was obviously the difference in the game in the first half,” the coach said. “In the second half, we gave up a couple explosive plays. Credit to Wisconsin to making those, and then we just all of a sudden decided to stop executing on offense for some reason for about 16, 18 minutes.”

Though Saturday started well, things unraveled after halftime. The Badgers committed three first-half turnovers and the Cats took a 10-7 lead into the break, looking to pull off an upset on national television.

“Those hit home today,” Dooley said of Wisconsin’s blitz scheme. “It’s just something that we’ve emphasized over the last two weeks, getting after the quarterback.”

Just one game into conference play, NU faces an uphill battle for a Big Ten West title. To make the conference championship game, the Cats would need to surpass Wisconsin outright as the Badgers now own the tiebreaker.

That task could be a challenge, with a home tilt against No. 4 Penn State looming next weekend. As NU spoke to media post-game Saturday, TV screens showed the Nittany Lions taking a 21-0 first-quarter lead over Indiana.

The Cats know what they’re up against, but the big question remains: Can they put together a full 60-minute performance?

“Very disappointed in the outcome of the game,” Fitzgerald said. “Obviously, we’ve got to get our guys to be more consistent to win games like this.”