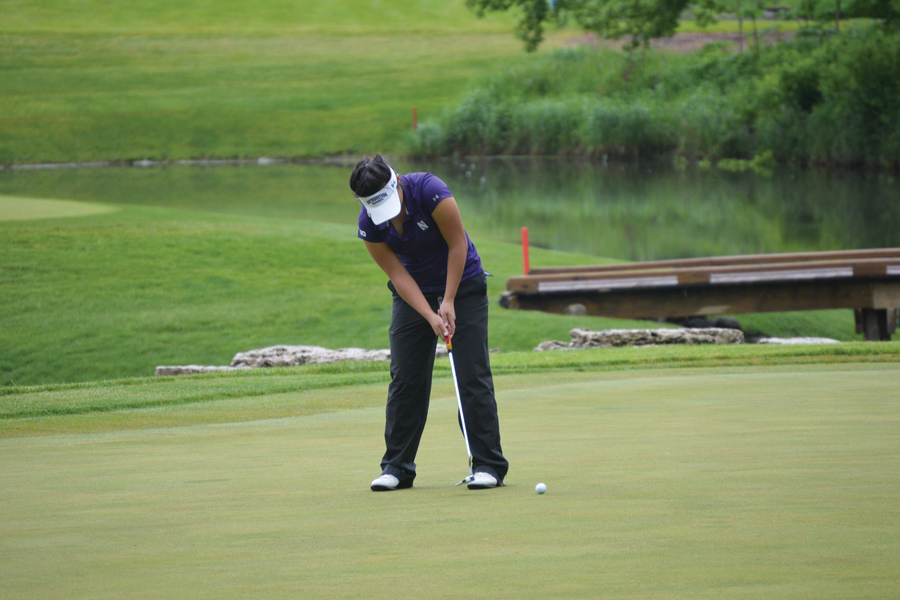 Sarah Cho strikes a putt. The senior is looking forward to her last home event this weekend.

After a two-week break from competition, Northwestern returns to Evanston this weekend for the Windy City Collegiate Classic, the Wildcats’ only regular season opportunity for home course advantage.

Junior Janet Mao said the two-week hiatus wasn’t really a break at all, but it did allow the team to readjust to balancing school and golf before hosting its home event.

“A break is not actually a break; we play every other day,” Mao said. “We still spend a lot of time on the golf course. We’re definitely still putting in a lot of work.”

Though the Cats had the unique opportunity last year to play in the NCAA Championships in Sugar Grove, the Classic is the only regular season tournament in Illinois. Coach Emily Fletcher said they try to take advantage of this annual opportunity to host an event.

Fletcher said the team relishes the opportunity to have fans cheering them on, as well as a chance to show the players and coaches from other schools a good time in the Chicago area.

“Our players are really, really proud of the event that we run,” Fletcher said. “Amongst our peers and around the country it’s known as one of the best events in women’s golf. We really do try to make this event stand out.”

The team tries to rotate where the event is hosted, Fletcher said. This year, it is being held at Northmoor Country Club in Highland Park. It’s been four years since NU hosted the event at Northmoor.

The two-week break from competition also allowed the Cats to regroup after the Mason Rudolph Championship in Nashville, Tennessee. Even though senior Sarah Cho posted the second-lowest score in program history at six-under par in the second round, Fletcher said the Cats are hoping for more at their home event.

“The golf course was extremely scorable,” Fletcher said of the Nashville tournament. “We played OK, but … we finished in fifth place. Building off of Vanderbilt … we’re looking to continue to improve.”

Cho said her individual win gave her “spirit a boost,” keeping her motivated through the break and into this tournament. She also said a break is a great time to work on things people are really struggling with, which isn’t always possible during a stretch with lots of competition.

As one of two seniors, Cho said the event comes with many emotions as it’s the last time she and fellow senior Hannah Kim will play in the Classic.

“It’s just kind of a bittersweet kind of a moment,” Cho said. “Everything is a last something. But … we’re just playing it as another tournament.”