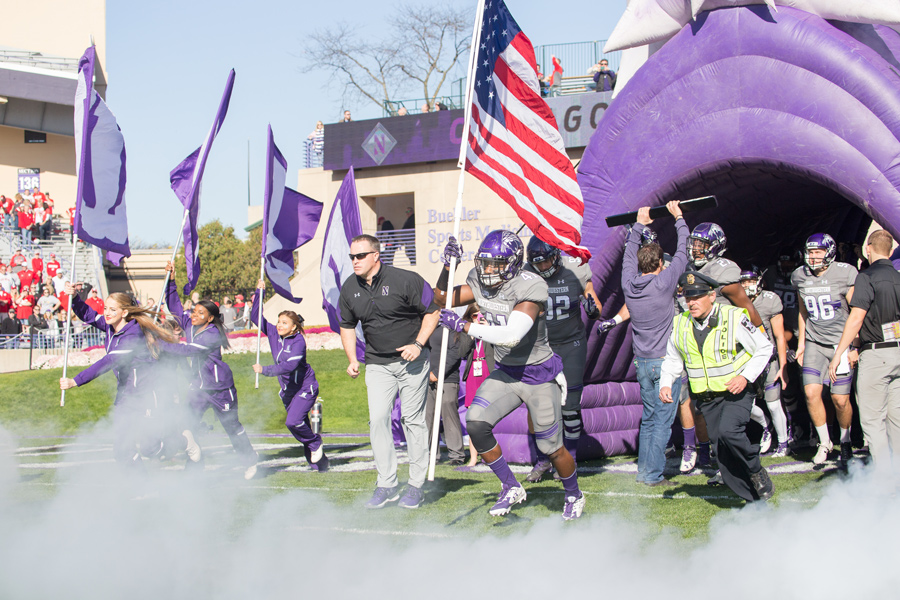 The Wildcats leave the tunnel. The team has said it will take the field with arms locked Saturday.

Pregame politics have made it to Northwestern. The word on the street, first reported by the Chicago Tribune this week, is that the Wildcats will take the field arms-locked in Madison prior to their battle with the No. 10 Badgers on Saturday.

It’s an oblique critique of racism and of America’s white nationalist-leaning leadership from the Cats. Another wave in the storm, spawned by President Donald Trump’s criticism of those who kneel during the national anthem, that has pitted our confused Commander in Chief against much of the football world.

Players and coaches linking arms in a show of unity against racism or just about anything is perfectly fine with me. It should be with you too, regardless of your politics. After all, it’s even cool with Trump and apparently consistent with his execrable views on race.

But for that reason, and that reason in particular, let’s not get too worked up about NU’s planned move for Saturday. Coach Pat Fitzgerald and his players are saying the right things, but this show of unity stands as no main event. The players won’t be on the field for the anthem due to its timing prior to the Badgers game.

If a bolder statement in opposition to racism, Trump or police brutality comes from the Cats, it won’t be this week.

Homecoming Weekend against Penn State? Well, that might be a different scene. We can peer ahead through the mist and imagine players kneeling on Oct. 7, when they will likely be on-field for The Star-Spangled Banner.

If they do, they should be lauded for their courage in a country where many are too attached to a chest-beating national anthem with a mediocre melody and not nearly attuned enough to vast social and economic racial disparities. If NU players take a knee then, we should respect it (a point made compellingly by Troy Closson in this publication Monday). In fact, we should celebrate it.

But there’s no need for histrionics regarding the arm-locking unity show. Nothing wrong with it. No reason to criticize it. It’s great that NU’s team is united. If the Cats are united enough to knock off the Badgers for the second straight time at Camp Randall, all the better.

Often, the social context surrounding a sporting event proves more compelling than the contest itself. Such became the case in the NFL last weekend. Even the likes of Jerry Jones, the attention-sucking owner of the Dallas Cowboys, took a knee prior to the anthem in Arizona with his players in what has suddenly devolved into a McProtest — its original purpose fading amid the noise.

Trump has once again brought together so many against him. That the Cats appear to sit among those ranks is dandy. But linking arms lacks the shock factor of real protest; kneeling for the anthem disturbs the myth that American symbols are unimpeachable.

This week at least, what the Cats do after kickoff deserves more attention than what they do before it.

Tim Balk is a Medill senior. He can be contacted at timothybalk2018@u.northwestern.edu. If you would like to respond publicly to this column, send a Letter to the Editor to opinion@dailynorthwestern.com. The views expressed in this piece do not necessarily reflect the views of all staff members of The Daily Northwestern.