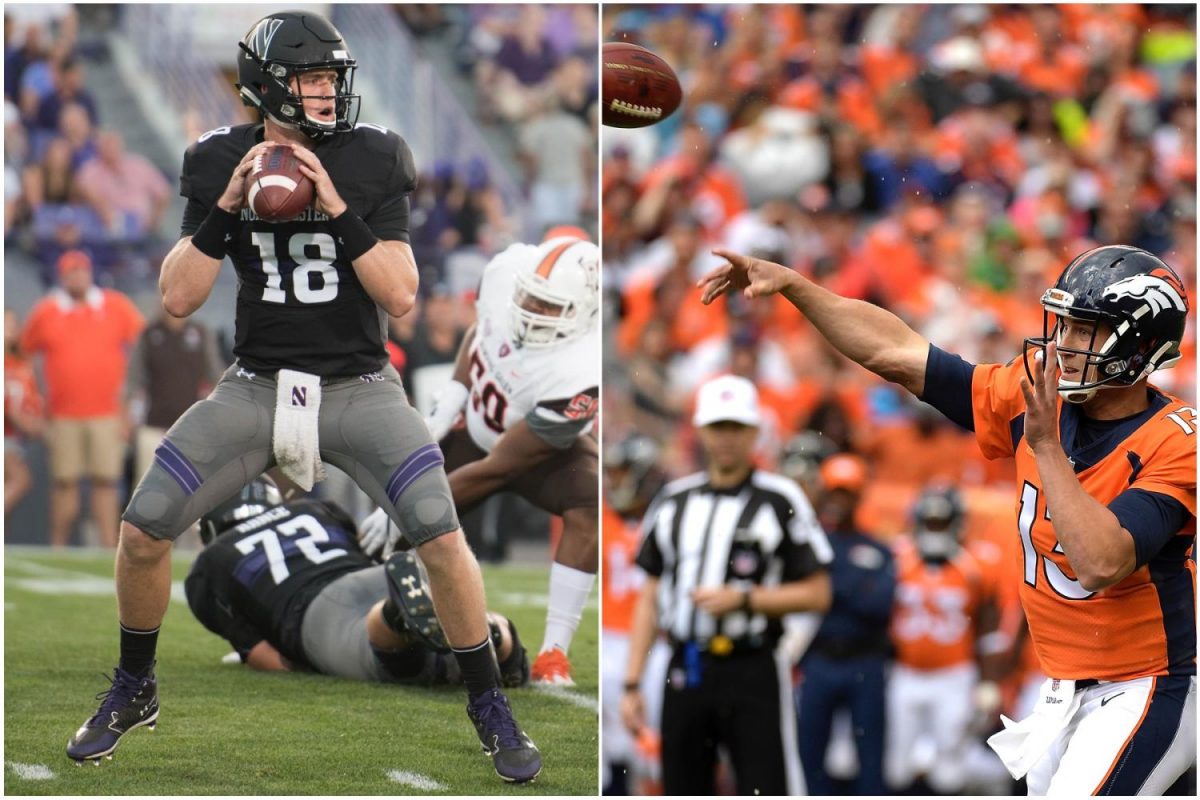 Clayton Thorson (left) scans the field, while Trevor Siemian throws the ball. Siemian is in his second season as the starting quarterback for the Denver Broncos while Thorson has strong pro prospects.

The joint rise of current Northwestern quarterback Clayton Thorson and NU alumnus Trevor Siemian’s strong early start in his second season under center for the Denver Broncos got The Daily’s sports desk thinking: Which Wildcats quarterback will end up with the better professional career?

Jonah Dylan: Let’s get this part out of the way first: Thorson has already cemented himself as one of the best quarterbacks in NU history, and there’s no doubt he’ll leave Evanston with a much more impressive resume than Siemian. But college success isn’t the question here, so let’s look at how each quarterback projects in the pros.

Although Siemian had a rough college career and was locked in a perennial quarterback competition with the notorious Kain Colter, the Broncos saw enough potential to pick him in the seventh round of the 2015 draft. It’s safe to say not many people expected him to ever play, but two seasons later — as Peyton Manning retired and Brock Osweiler conned the Houston Texans into giving him $18 million a year — Siemian found himself in a competition with 2016 first round pick Paxton Lynch and journeyman Mark Sanchez. And it wasn’t even close. In his first career start, he beat reigning NFL MVP Cam Newton.

In Week 3, he became the first quarterback in NFL history to throw for more than 300 yards and four touchdowns in his first career start away from home. And though the team struggled and ultimately missed the playoffs, it wasn’t on Siemian; he had a higher passer rating than Osweiler and Manning had combined for the previous year, when the team won the Super Bowl.

A year later, Siemian has cemented his spot as Denver’s quarterback, and he’s only getting better. Siemian has struggled with subpar offensive line play throughout both his college and pro careers, but he’s already off to a hot start this season. Though the sample size is small (and Case Keenum is No. 2) Siemian has the 11th best passer rating so far this season. Thorson, meanwhile, just got blown out by Duke.

Cole Paxton: Your point about Siemian’s early-career success is well-taken, Jonah. But quite simply, Thorson has gobs of potential that translate exceptionally well to the NFL. His arm strength is better, he has more agility in the pocket and he can more effectively use his legs on broken plays or run-pass options. Take a snippet of rushing numbers: Siemian has tallied just 102 yards on the ground in his 17 games as Denver’s starter; Thorson very nearly hit that number in 2016 alone on top of throwing for a program-record 22 touchdowns.

That brings me back to my original point about Thorson: He has a better arm than his predecessor. Siemian has been capable on deep shots, completing about half his throws over 30 yards in the NFL. But Thorson is better here. His arm strength is not yet phenomenal, but he has the requisite talent. His 58-yard loft to Ben Skowronek against Bowling Green, for example, was sublime. But perhaps Thorson’s greater skill is his accuracy. If you need evidence, consider his other touchdown to Skowronek against the Falcons, in which the sophomore wide receiver was draped like a window but still hauled in a dart from his quarterback.That, my friend, is the kind of talent that screams professional success.

I get that much of my argument has focused on Thorson’s performance against two lightly-regarded nonconference opponents, but consider Thorson’s current company among pundits. ESPN’s Mel Kiper ranked him a top-5 underclassman quarterback ahead of this season, on the same list as UCLA’s Josh Rosen and Louisville’s Lamar Jackson, last year’s Heisman Trophy winner. Given those elite counterparts and Thorson’s continued development this season (and next, should he return to school), he’ll enter the NFL ready to make an instant impact and with an easily-reachable upside that far eclipses Siemian’s potential.

Dylan: Thorson’s NFL career could ultimately come down to opportunity. There are only 32 open spots, and Thorson is already ranked behind the likes of Rosen, Jackson, Penn State quarterback Trace McSorley, USC quarterback Sam Darnold and a slew of others. Siemian has already proven he’s a better quarterback than Lynch, a former first round pick in his own right. So, to recap: Siemian is already better than a first round pick, but Thorson isn’t close to being good enough to be picked in that range. Siemian’s success has come down to, essentially, a stroke of good luck. I’m just not sold on Thorson ever actually getting a chance as a starting QB.

Paxton: As fans of perpetually bad NFL teams would say, Jonah, there are several woeful starting quarterbacks in the league, and lots of fruitless years-long efforts to find a star. One big reason Siemian won a job is because he was more consistent and level-headed than the journeyman Sanchez and the wildly inconsistent Lynch. Thorson fits that mold exactly: Coach Pat Fitzgerald and others have raved about Thorson’s mental development, and the quarterback himself said his biggest improvement this offseason was his calmness and confidence in the huddle.

Dylan: Well, Cole, if consistency is what we’re looking for, Siemian has Thorson beat without a doubt. Thorson has showed flashes, like when he went to Columbus and nearly beat J.T. Barrett and Ohio State, but he’s also failed his team on numerous occasions. The loss to FCS bottom-dwellers Illinois State last year, as well as the shellacking at the hands of the Blue Devils earlier this year, come to mind. Does an NFL coach want to deal with that?

Paxton: If both were in the NFL today, Siemian would undoubtedly be better. But that’s not what we’re debating. I could discuss games like Siemian’s eight-completion, five-sack outing against Iowa his senior season in which he was benched for Zack Oliver, but I’ll stop there. Siemian had some real lows at NU, just as Thorson has. A Broncos scout saw enough potential on Siemian to take a flyer, and he miraculously won a starting job. Thorson, meanwhile, is a highly-touted quarterback who can do just what Siemian can — but better.