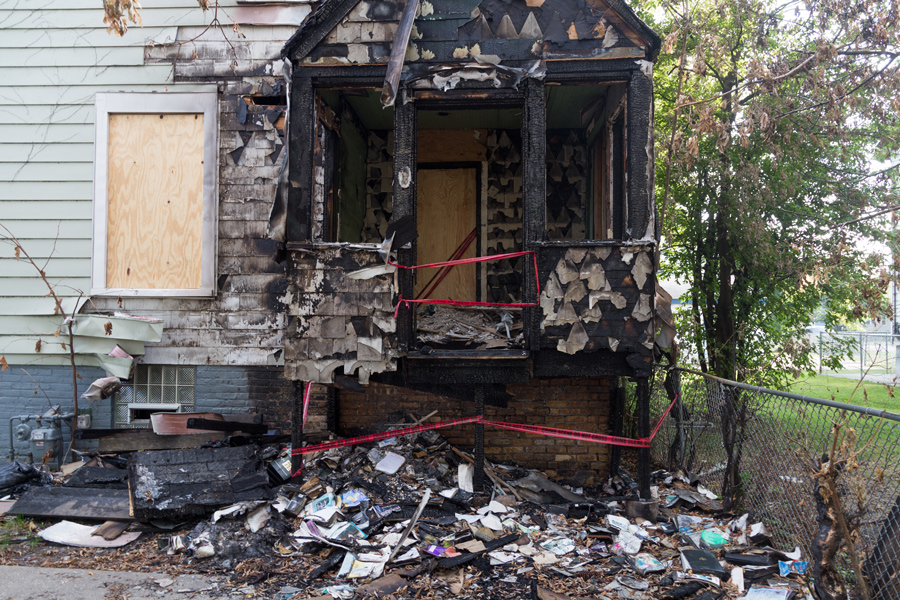 The Syrian refugee family’s old house, located in the 1700 block of Lyons Street. The family finalized their housing after weeks of living without a permanent home following an accidental fire.

A Syrian refugee family that settled in Evanston last year and lost its house in a fire this August has finally found a new place to settle down with the help of nonprofits and the local community.

RefugeeOne — the Chicago-based nonprofit resettlement agency that initially found and furnished a home for the family — will help them relocate and set up their new house within the next few weeks, said Jims Porter, the organization’s communications and policy coordinator.

Porter said he did not know where the family would be living, but said finding another home had proved difficult.

“The house we found for them at first was through a landlord we work with pretty regularly, but since it’s a larger family, it was a challenge to find an affordable single-family house that fits them,” Porter said. “And we had to do that again.”

The family came to the United States from Jordan as refugees, Porter said. They arrived in Chicago in July 2016 and moved to Evanston shortly thereafter.

Early in the morning on Aug. 22, the family’s house — located in the 1700 block of Lyons Street — caught on fire, according to a news release from Evanston Fire Department division chief Paul Polep. Fire departments from several communities assisted local crews in bringing the fire under control within 15 minutes of the first alarm.

Although everyone exited the building safely, one adult member of the family was transported to the hospital for minor smoke inhalation and examination, Polep said in the release. Polep later told the Chicago Tribune the incident had been ruled an accidental fire that initially began outside.

Porter said RefugeeOne helped coordinate temporary housing for the family at Jesus People USA — a church in Chicago — where they stayed briefly before shifting to stay with nearby relatives until finding a permanent housing solution.

But the arduous process was eased significantly due to deep ties the family had created in the Evanston community, he said.

“There was a huge outpouring of support for the family when they needed it,” Porter said. “The friends they’ve made while living in Evanston have fundraised and donated directly to them.”

Though Porter didn’t have an exact number for the amount donated, he told the Tribune that one anonymous donor gave the family more than $20,000. Separately, a GoFundMe campaign created Sept. 11 by the Syrian Community Network — a nonprofit refugee support organization — had raised more than $2,100 of its $10,000 goal as of Thursday.

City staff also aided in relocation efforts by providing RefugeeOne with housing resources and ensuring the family’s seven children — the oldest being 11 years old and the youngest only 3 years old — could remain in Evanston/Skokie School District 65 until they found permanent housing.

RefugeeOne sits on the city’s Refugee Task Force and staff has communicated that Evanston and its police department are ready to help, said Savannah Clement, a housing policy and planning analyst for the city.

Clement said resettlement agencies usually place people in Skokie and Chicago, filtering into Evanston when they can’t find housing in the other cities. She said staff wasn’t notified when the refugee family moved in — and usually aren’t — but after the fire, a RefugeeOne volunteer and employee reached out to the Health and Human Services Department for information on available housing.