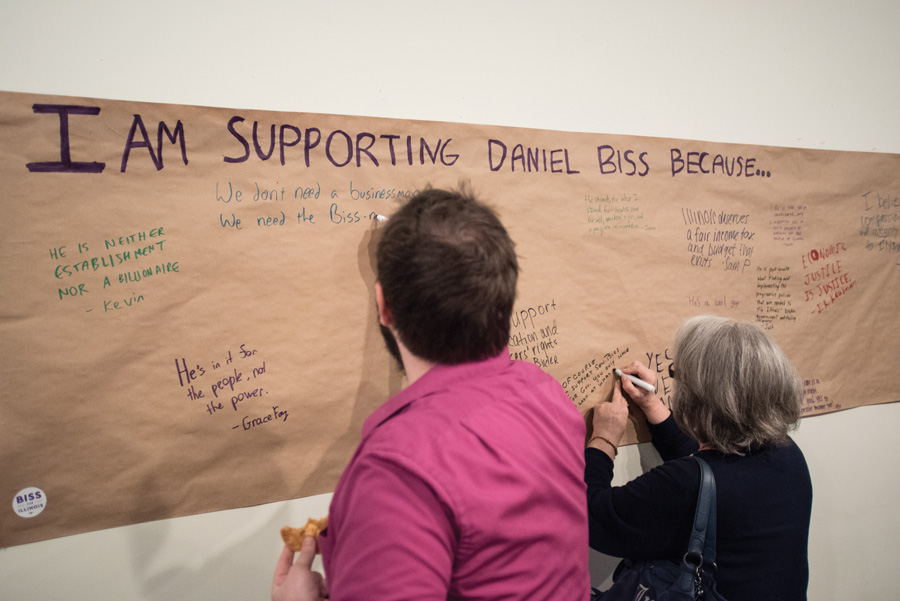 The move, which came less than a week after announcing Chicago Ald. Carlos Ramirez-Rosa (35th) as his running mate, drew ire from left-wing groups and some supporters.

But local volunteers said they trusted the politician after having voted for him over many years — from when he first ran for the state legislature in 2008 to his brief bid for Illinois Comptroller in 2015.

“I don’t see that anything has really changed here,” said Jerry Specht, a 67-year-old Evanston resident and Biss campaign volunteer. “He’s pretty well loved in Evanston, so the concerns are mainly outside.”

Biss said in a Sept. 6 news release that he and Ramirez-Rosa separated after it became clear their views on the Boycott, Divestment and Sanctions movement — a pro-Palestinian group that calls for a withdrawing of financial and social support for Israel and Israeli companies — diverged.

Biss said he opposed BDS because it “moves us further away from a peaceful solution,” and though Ramirez-Rosa had also expressed the same concern in their initial conversations, Biss said it had “become clear that Carlos’ position has changed.”

Ramirez-Rosa said in a Facebook statement that though the movement should not be pursued at the state level, he believes it should be discussed by the federal government.

Left-wing groups who were excited by Ramirez-Rosa, a member of the Democratic Socialists of America, sharply criticized the state senator for his decision, according to the Washington Post. Volunteers in some parts of Illinois left the campaign as well.
“It made Daniel look bad, as if he was indecisive and ineffective,” Specht said. “And maybe we should have studied Carlos more to understand his position better, but it’s not important in the big picture.”

Shortly after the controversy, Biss announced state Rep. Litesa Wallace (D-Rockford) as his new prospective lieutenant governor. A woman of color, Wallace was elected to the Illinois House of Representatives in 2014 after working as a mental health counselor, a professor and chief of staff to former state Rep. Charles Jefferson (D-Rockford).

Leslie Berman, a 64-year-old Skokie resident who lives in Biss’ district, said she believes most of the people who switched their support were on the fence already. Neither she nor Specht have seen local volunteers quit or been contacted by angry residents.
Berman, who assists the campaign’s communications team by responding to Facebook messages and emails, said people from all over Illinois have reached out to her. In general, she said, most of the supporters who ask about the split are just curious for more details.

“The vast majority who support Daniel really support him, especially in Evanston,” Berman said. “There was a certain amount of sadness, disappointment. But most said, ‘We trust you’re doing the right thing.’”

Campaign volunteers have been gathering signatures to get Biss and Wallace on the ballot for the election through petition events.

Nadia Perl, a press assistant for the campaign, said this past week there were three petition events held in Evanston and 50 throughout the state. She said the campaign did not yet have numbers on how many signatures were collected.

Despite the recent controversy, both Specht and Berman said they were optimistic about their candidate’s chances.

“You don’t go into a running mate agreement hoping it doesn’t hold,” Berman said. “Sometimes you do what’s hard, but it’s less hard than if you don’t do it. He’s a person of great integrity, and that’s why we will be voting for him.”