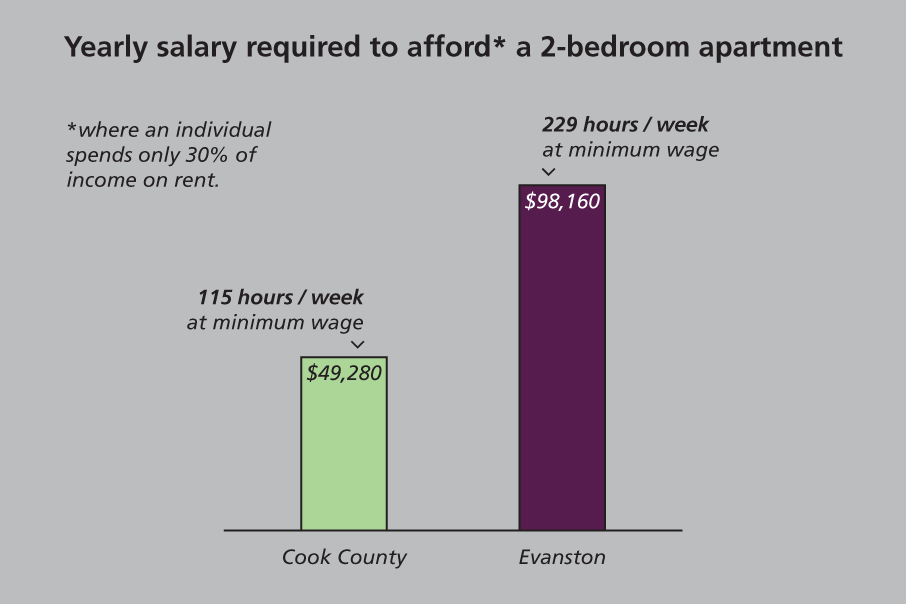 Although city staff presented an affordable housing and accessibility overview at Monday’s City Council meeting, service providers and residents were upset that no concrete plan had been created, let alone implemented.

During public comment, many said they wanted council to finally take action.

Tracy McKeithen, executive director of Family Promise North Shore — a family homeless shelter in Evanston — said the city has been talking about change since the formation of the Mayor’s Task Force on Homelessness in 2011.

“I urge you to not have another discussion about the need for affordable housing in Evanston. It is crystal clear,” McKeithen said. “We need to make units available to families in need.”

According to the presentation, Evanston faces a gap in the supply and demand of affordable housing, which typically serves low- to moderate-income households, people with disabilities and older adults. A study by the Institute for Housing Studies at DePaul University found there is a 9,927-household demand of affordable housing in Evanston and Skokie, but only 3,945 units available.

In addition, the fair market rent for a two-bedroom apartment in Cook County is $1,232, compared to a $2,454 average rent in Evanston, said Savannah Clement, a housing policy and planning analyst for the city.

To meet city staff’s definition of affordable housing — where 30 percent of income is devoted to rent — Clement said a household in Cook County would have to work for 115 hours a week at minimum wage to afford a two-bedroom apartment. In Evanston, that number would be an impossible 229 hours per week.

“There literally aren’t enough hours,” Clement said. “This isn’t just an Evanston and Cook County issue, this is a nationwide issue of the affordability gap.”

Aldermen also addressed the need for the city to support landlords who have worked to maintain affordable housing rates but often lack the assistance to continue doing so.

For example, Tina Paden, a landlord at Paden Properties on Emerson Street, said her company works to provide low-income citizens with affordable units.

Though it has housed people referred by charity organizations such as Connections for the Homeless and Family Promise in the past, the company will no longer be able to provide affordable housing due to the lack of resources provided by the city, she said.

But aldermen did not label the city’s ideas a “plan,” and city manager Wally Bobkiewicz said the list was more “food for thought” for council members to use in future discussions.

Some service providers offered suggestions for staff and the council.

Gail Schechter, affordable housing advocate for the Illinois Housing Appeals Board, said affordable housing should be rebranded as “mixed-income” housing that would serve the “full spectrum” of incomes in Evanston. With the affirmative marketing, she said, the housing would promote more unity.

“Ask yourself when judging any proposal or policy,” Schechter said. “‘Will the proposed project or policy give us housing for all populations in every neighborhood, in every building or does it serve to separate?’”

Sue Loellbach, manager of advocacy at Connections for the Homeless, said the city should not only create an “actual” plan, but it should also ensure there is a “clear and deliberate” implementation plan.

She said affordable housing is the key to creating economic equity, without which no other type of equity being discussed can be sustained.

At the end of the presentation, aldermen agreed to further discuss the information at a follow-up meeting in late October.