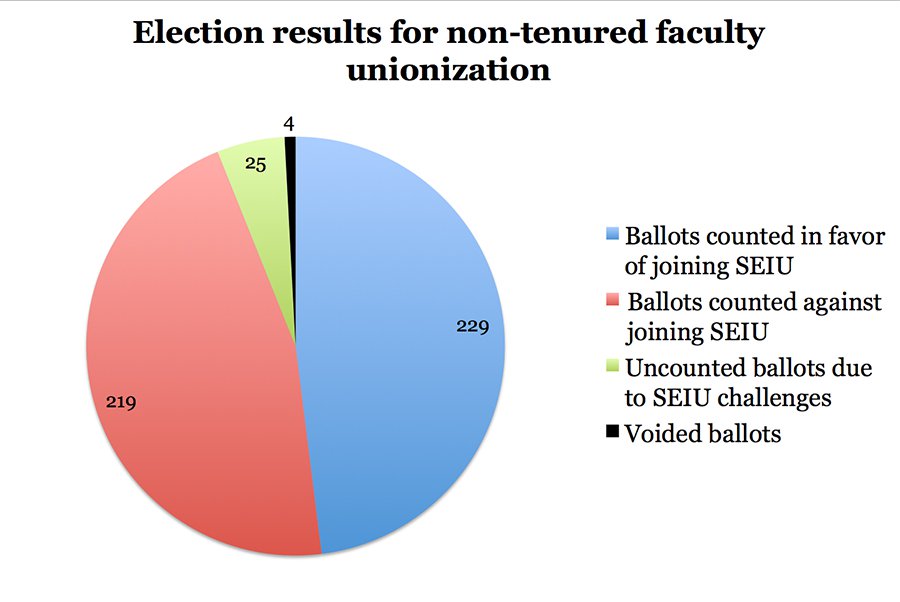 “I am disappointed by the administration’s refusal to recognize the (non-tenure eligible) faculty union and to participate in the negotiations planned for this Fall,” Italian lecturer Alessandra Visconti said in a news release. “We ask that it reevaluate its decision and serve as a model of fairness and excellence for faculty, students and the entire Northwestern community.”

In June 2016, faculty at Northwestern filed for an election to form a union representing non-tenure eligible faculty. Due to several contested ballots, majority support for joining Service Employees International Union was not confirmed until May.

According to a National Labor Relations Board document obtained by The Daily, 229 non-tenure eligible faculty voted in favor of joining SEIU and 219 voted against it. Twenty-five ballots remained uncounted after being challenged by SEIU.

Northwestern appealed the 25 ballots with the National Labor Relations Board, University spokesman Al Cubbage told The Daily in July. He said the University won’t begin bargaining until all the ballots have been counted, and the appeal is still pending.

Provost Jonathan Holloway said in a statement this week that he was “disappointed by the union’s stance.”

The University has asked SEIU to “withdraw its objections” to the 25 ballots, Holloway said in the statement. Every ballot must be counted so the University and non-tenure eligible faculty can move forward with certainty, he said.

“We have strong working relationships with unions that represent a number of Northwestern employees, and should the final results of this election indicate a majority of the non-tenure eligible faculty voted for a union, we are committed to forming a productive relationship with this new union as well,” Holloway said in the statement.