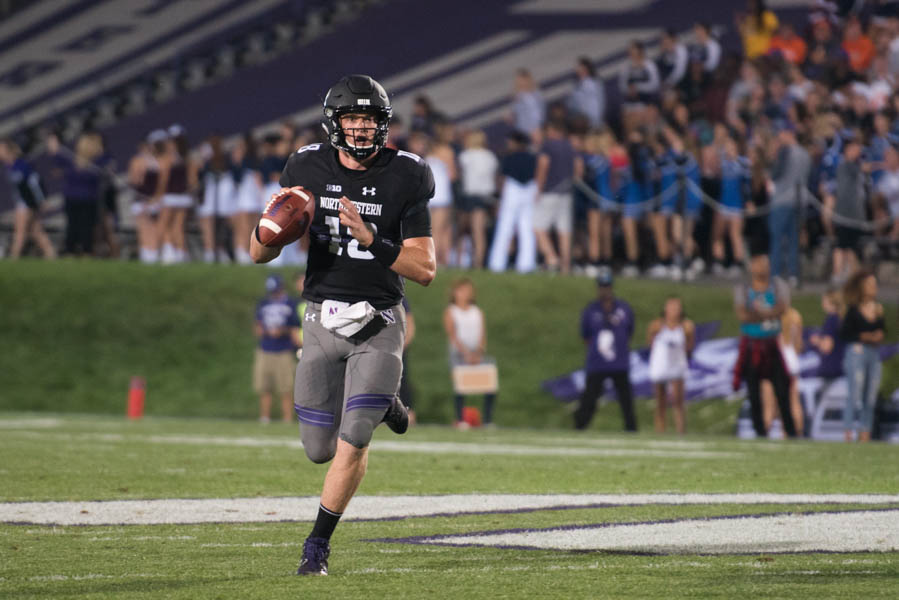 Clayton Thorson scans the field. The junior quarterback passed for a career-high 370 yards against Bowling Green.

What a difference a week can make.

Seven days after falling at Duke in the most lopsided non-conference loss of coach Pat Fitzgerald’s tenure, Northwestern (2-1) thrashed Bowling Green (0-3) 49-7 under the lights at a humid Ryan Field on Saturday.

“We got knocked down last week, it happens,” Fitzgerald said. “The only thing we could do is get up off the mat, and then tonight was about coming out swinging.”

The Wildcats responded by flexing their offensive muscle against the Falcons, as junior quarterback Clayton Thorson scorched Bowling Green for a career-high 370 passing yards and senior running back Justin Jackson rolled up 121 yards on the ground.

The win should provide NU with a much-needed confidence boost following the 24-point loss a week ago and an uneven season-opening victory against Nevada.

NU’s new students ran onto the field pregame as part of the annual Wildcat Welcome festivities. Many of them, who joined an announced crowd of 33,706, left by intermission with the Cats boasting a 35-7 lead.

The hosts owed that advantage to a trio of rushing touchdowns and a pair of touchdowns tosses from Thorson to sophomore wide receiver Ben Skowronek. After the game, Fitzgerald praised Thorson, who bounced back from an 11-of-29 passing performance against the Blue Devils.

“Probably of anybody on the squad, his response I think was outstanding,” Fitzgerald said. “A game that he can’t have back last week, but he could do something about it. And obviously he did.”

Thorson’s strong outing powered the offensive explosion. After the Cats’ first possession sputtered out after six plays, they scored on five straight drives spanning most of the first and second quarters.

Jackson skedaddled for a five-yard touchdown midway through the first period to give NU its initial score. On the next possession, Thorson connected on a deep ball down the sideline to Skowronek for a 58-yard touchdown that broke a 7-7 tie.

Junior cornerback Montre Hartage forced a Bowling Green fumble early in the second quarter and senior safety Godwin Igwebuike, who played running back in high school, weaved his way 45 yards after recovering the loose ball. “As soon as I picked it up, I had some flashbacks,” Igwebuike said. “I had to remember what I have done. So I picked it up, made a little cut there, little jig there. I thought I had the hole, and somebody got me from behind. But it felt good.”

After the turnover, NU’s offense again struck quickly: Thorson hit Skowronek for an 18-yard touchdown on the first play of the drive. The score put the Cats up 21-7, and they rolled from that point.

NU’s defense displayed some holes early, as Bowling Green racked up 10 first downs in the first half and 81 yards on its first-quarter touchdown drive. But Fitzgerald described the defensive performance overall as “really good,” and the Cats clamped down on the Falcons for the rest of the game.

The dominant performance propels NU into a bye week before its Big Ten opener at No. 10 Wisconsin on Sept. 30.

“It’s definitely a high — coming off a great win,” senior defensive tackle Tyler Lancaster said. “But we’ve got to respond. … We need to treat the next game like it’s our Super Bowl.”