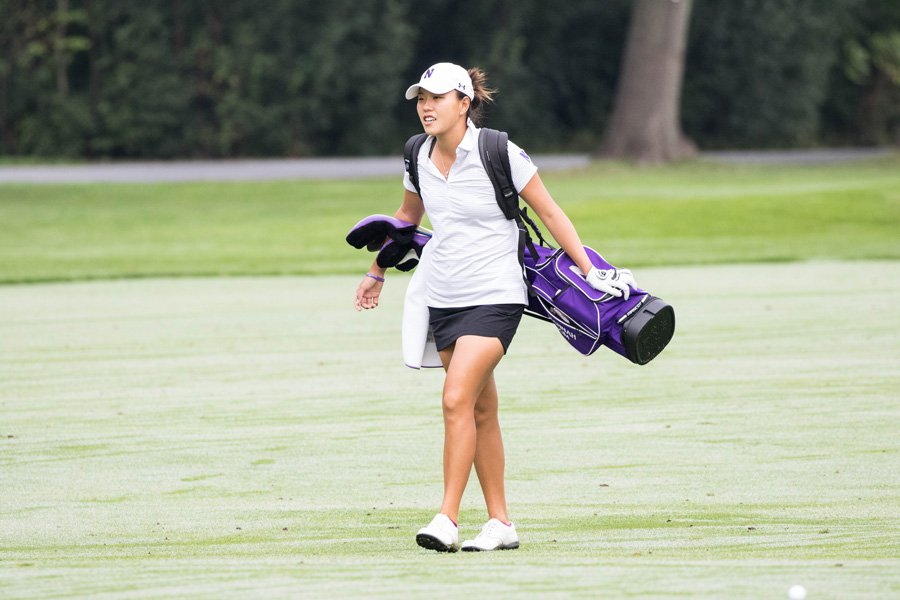 Hannah Kim walks with her clubs. The senior helped lead the Wildcats to a second-place finish at the Dick McGuire Invitational.

Classes may not have begun, but it was full speed ahead on Monday and Tuesday as No. 6 Northwestern took the Dick McGuire Invitational by storm, finishing second overall and placing two players in the top 5. It was the first tournament for the Wildcats since they finished as the national runners-up at the NCAA Championships in May.

NU began its season in New Mexico with a veteran squad comprised of two seniors, two juniors and one sophomore. Senior Hannah Kim played in the tournament each of her four years on the team, and fellow senior Sarah Cho won the tournament two years ago.

The competition left little to be desired, with No. 2 Stanford and five other top 25 teams joining the Cats in the field.

Coach Emily Fletcher said hard work in the summer contributed to the strong season opener. Juniors Janet Mao and Stephanie Lau made it to match play in the U.S. Women’s Amateur in August, while sophomore Brooke Riley won the California Women’s Amateur title.

“We really compete all year-round; most of our girls play a heavy summer schedule,” Fletcher said. “They knew we were going to play immediately and play often. They were prepared and ready to compete.”

The opening round proved fruitful, with Mao, Lau and Kim finishing in the top 15. Kim led the team, shooting a 1-under-par 71. Mao, meanwhile, shined brightly with seven birdies.

After the first day of competition, the Cats sat in fourth place. A strong Tuesday then propelled them into second.

Kim and Mao both recorded under par rounds to secure their top-5 finishes, with Kim in fourth and Mao tied for fifth. No. 24 Oklahoma State ultimately won the title, besting the Cats by two strokes.

The Cats quickly returned to Evanston, but don’t have time to unpack their suitcases as they prepare to head to Nashville for the Mason Rudolph Championship, which begins Friday. There, they’ll face a handful of top-25 opponents, including No. 1 Arizona State — the team that beat NU to win the national title in the spring.

And while the turnaround is fast, Kim said the quarter system is in NU’s favor this weekend.

“Since school hasn’t started, this quick turnaround is going to be an advantage for us,” Kim said. “We’re kind of in a tournament mode already. Just knowing what we need to work on will translate to what we … focus on this coming week.”