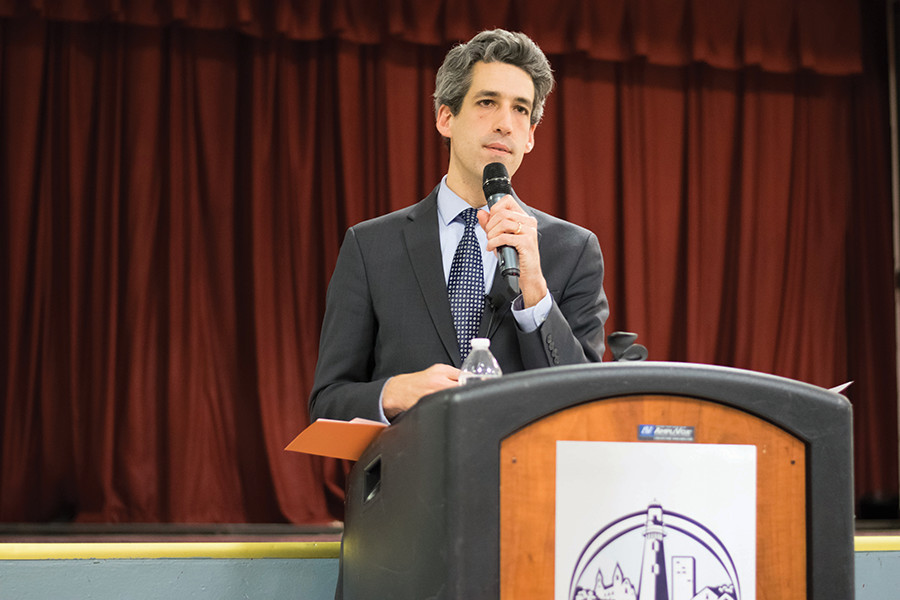 State Sen. Daniel Biss (D-Evanston) speaks at a town hall in January. On Wednesday, Biss dropped Chicago Ald. Carlos Ramirez-Rosa (35th) as his running mate in his bid for Illinois governor, less than a week after having first picked him.

Less than a week after announcing Chicago Ald. Carlos Ramirez-Rosa (35th) as his running mate in the Illinois gubernatorial election, state Sen. Daniel Biss (D-Evanston) said he would move forward with a new prospective lieutenant governor.

Though Biss, who is Jewish, did not specify a replacement, he said he and Ramirez-Rosa reached the “difficult decision” about separating after it became clear that their views on Israel had diverged.

“I strongly support a two-state solution. I support Israel’s right to exist, and I support Israel as the homeland of the Jewish people,” Biss said in a Wednesday news release. “I also care deeply about justice for Palestinians, and believe that a vision for the Middle East must include political and economic freedom for Palestinians.”

Biss said in the news release that he opposes the Boycott, Divestment and Sanctions movement — a pro-Palestinian group that calls for a withdrawing of financial and social support for Israel and Israeli companies, according to the movement’s website — because he believes it “moves us further away from a peaceful solution.”

Though Biss said his former running mate supported a two-state solution and opposed BDS in their initial conversations, it has “become clear that Carlos’ position has changed.”

In a 2016 interview with The Real News Network, a Baltimore-based nonprofit news organization, Ramirez-Rosa said while at the People’s Summit in Chicago that he did not hear much discussion about “the relationship of the U.S. with Israel, with divesting from Israel to support the people of Palestine.”

“Not a lot of that was discussed this weekend,” Ramirez-Rosa said. “And I think that’s a conversation (that) needs to be had.”

Ramirez-Rosa is also a member of the Democratic Socialists of America, an organization which in August passed a resolution in support of BDS.

In a Facebook statement Wednesday, Ramirez-Rosa explained the split differently. He wrote, “ … (While Biss and I) both oppose pursuing BDS at the state level, the difference of opinion we have on the role the BDS movement plays at the federal level would make it impossible to continue moving forward as a ticket.”

Ramirez-Rosa told The Daily he believes BDS should not be pursued at the state and local levels because “it’s a matter of foreign policy and therefore needs to be discussed and decided at the federal level.”

Still, he told The Daily that BDS should be “a part of a constructive conversation” in the federal government, and disagreed with Biss’ statement about the inefficacy of BDS, saying “the power of the purse is extremely powerful and effective.”

Biss’ move to drop Ramirez-Rosa as a running mate comes after a Sunday night Facebook post from U.S. Rep. Brad Schneider (D-Ill.) in which he withdrew his support for their campaign after learning of Ramirez-Rosa’s support of the BDS movement.

Despite the differences between the gubernatorial candidate and his former running mate, however, Ramirez-Rosa told The Daily he was “honored” to join Biss’ ticket and still agrees with many of Biss’ progressive goals, like affordable childcare and an increase to the state minimum wage.

This story was updated at 9:55 p.m. with Ramirez-Rosa’s comments.