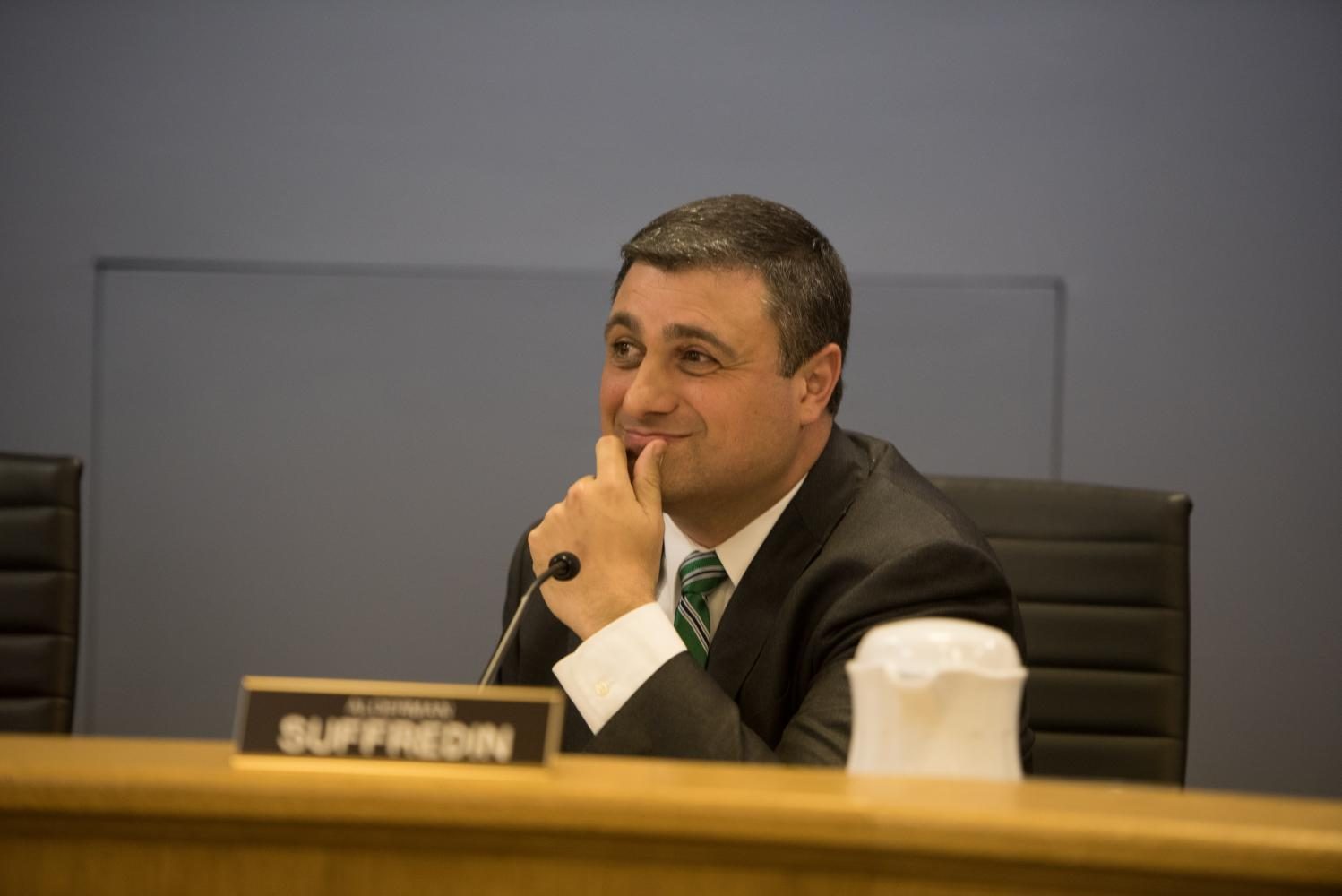 When Tom Suffredin took office as the new 6th Ward alderman in May, he was helping usher in a “sea change” in Evanston politics.

Suffredin, along with the two other new aldermen who were elected in May — Ald. Robin Rue Simmons (5th) and Ald. Cicely Fleming (9th) — are younger than many of their fellow Council members and bring with them different life experiences than their more seasoned peers.

“He’s the youngest alderman right now,” said Suffredin’s father, Larry Suffredin — the Cook County Commissioner for the 13th District, which includes Evanston. “This is kind of a sea change time for his generation to take over (politics).”

Public service runs in the family

Tom Suffredin grew up in Evanston, left the city to go to college, and moved back to the 6th Ward in 2009, where he lives with his wife, Clare, and their four young children. He works as a contract lobbyist and makes frequent trips to Springfield for legislative work.

His father was elected Cook County Commissioner in 2002, when his son was in law school at Loyola University Chicago. Tom Suffredin said public service was always a theme in his house growing up, and he learned the importance of accountability and responsiveness.

Suffredin said he knew that if he ever ran for public office himself, he would be a person his constituents would turn to and expect answers from.

The concrete thought of running for office didn’t come until late last summer, after he helped sort out problems with a block party permit and said he was left frustrated.

“It’s kind of typical of his situation,” Larry Suffredin said. “He thought (something in the process) was wrong and he wanted to correct it. I think the situation with that block party was the motivation to (actually run for office).”

Around the same time, former 6th Ward alderman Mark Tendam was gearing up to run for mayor, a bid that proved unsuccessful but opened up a new seat on City Council. Tom Suffredin campaigned against Virginia Mann, a community activist and owner of a private public relations firm.

He won the election in May with over 57 percent of the vote.

Solving problems for residents and interacting with his constituents has always come naturally to Suffredin, said Erica Reardon, his longtime friend and campaign manager.

“He wants to fix things,” Reardon said. “So the idea that he came in as soon as someone had an issue and said ‘I’m going to fix this…’ didn’t surprise me at all.”

She said one of his main priorities was to make sure he was responsive to his constituents and accessible as a resource. Reardon said they met people during the campaign who said they were having trouble getting answers and help, which further motivated Suffredin.

His ward, which sits in the northwest corner of the city, is highly residential and faces traditional “nuts and bolts city service” issues like ensuring crosswalks and traffic lights are improved, Suffredin said. Reardon added that waste management and the minimum wage in Evanston were also priorities during the campaign.

Since the beginning of the year, there have been increased talks in Evanston about equity, equal access, the role of police and diversity in the community. In response, Evanston recently hired Rev. Dr. Patricia Efiom as its equity and empowerment coordinator and has introduced measures to reform police procedure, including the implementation of body cameras on officers.

But many, including Suffredin, say these efforts aren’t enough.

“In Evanston, we’re all very proud of ourselves for our diversity,” Suffredin said. “It’s one of the first things people talk about. But then you look at where people (of different backgrounds) live. We aren’t a diverse community in terms of where people’s homes are.”

In the last U.S. Census, Evanston counted about 40 percent of its population as people of color. That statistic differs by ward — some are highly diverse, while others, like the 6th Ward, are 90 percent white, Tendam told The Daily in May.

Because of this disparity, Suffredin said he values shared spaces and facilities, like James Park, the Robert Crown Community Center — which is undergoing plans for reconstruction — and the Evanston Public Library, where residents called for an equity audit in May.

“We may sort ourselves into our little filing cabinets, and there are a lot of reasons for that,” he said. “The only kids I knew (who weren’t from my immediate neighborhood) came from playing sports at James Park or … Robert Crown. There’s a reason why they’re important.”

Suffredin sees the role of City Council as less involved with the day-to-day running of the city, but rather a body of oversight and encouragement for new and existing programs.

He took office amid budget negotiations on both a local and state level, as well as rising taxes due to the recently implemented Evanston/Skokie School District 65 referendum. He said it is a challenging time to be starting a term in office, but that Mayor Steve Hagerty had shown to possess the skills to deal with municipal financial matters.

Even when dealing with city-wide issues, Larry Suffredin said his son stays committed to his own constituents and their specific needs.

“(Your constituents) are expecting you to be their voice,” Larry Suffredin said. “In the early days of this new council, he’s felt compelled to vote ‘no’ a number of times to begin to make people conscious of the fact that they need to make a sea change in the way they run government.”