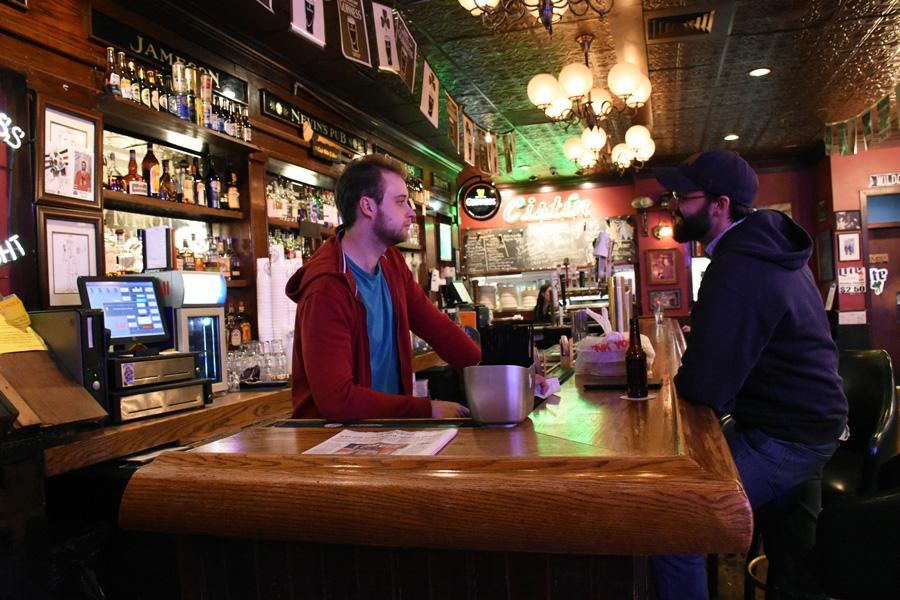 A customer is served at Tommy Nevin's Pub, located on Sherman Avenue. The popular bar for Northwestern students is for sale and will be demolished if a proposed 16-story apartment tower is approved by the City of Evanston.

The owners of Tommy Nevin’s Pub and Prairie Moon testified at Wednesday’s Evanston Plan Commission meeting in favor of the proposed apartment tower that would demolish their existing buildings.

If the 16-story tower at 1454 Sherman Ave. is approved, Prairie Moon restaurant would plan to move into a smaller space built into the new building’s first floor, while Nevin’s would close its Evanston location. The two buildings are currently located in the block of Sherman Avenue between Grove Street and Lake Street, which backs up against the CTA train tracks.

Rohit Sahajpal, Nevin’s owner and general manager, said he had voluntarily put the business up for sale and that the proposal presented by Albion Residential, a Chicago-based apartment development company, was the only viable buyer.

“We’re not going to be able to sell that building,” Sahajpal said at the meeting. “There’s petroleum all throughout the foundation — that was something that we didn’t know when we bought the building, and may not have moved forward had we known that — but that’s a pretty big issue.”

Prairie Moon owner Robert Strom said he had worked with Albion for more than a year and that a venue change would be prudent from a business perspective.

Prairie Moon’s current location is about 7,200 square feet, which Strom said is bigger than ideal, and bordered on one side by a pilates studio and a vacant storefront and on the other side by a parking lot — a lot that Strom said is “in disrepair.”

In the new development, the bar-restaurant hybrid would move into a location at the south end of the building, looking out onto a new small park that is also part of Albion’s proposal. The new location would be about 4,500 square feet and be next to two smaller retail spaces, Albion vice president of development Andrew Yule said.

“This is an opportunity for (Prairie Moon) to be able to update, for us to be able to be more relevant, more current,” Strom said.

Nevin’s, however, has a bleaker outlook.

Sahajpal said that despite investing into two remodelings, which improved a banquet area and added a beer garden, since purchasing the pub in 2003, the business’s finances have worsened in recent years.

“All that money was designed, obviously, to drive revenue. But we’ve actually seen revenue go the other way,” Sahajpal said. “While that’s been happening, property taxes have increased, and so running the business from that location has become pretty difficult.”

As the owner of Pete Miller’s steakhouse — located one block north on Sherman — in addition to Nevin’s, Sahajpal said he appreciated that Albion would be committed to the property long-term and be “good neighbors” for the steakhouse.

Nevin’s has long been a popular spot for Northwestern students. It was named College Bar of the Month by Playboy Magazine in 2002, the best college bar near NU by Thrillist in 2013 and the Best Bar in The Daily’s Best of Evanston awards in 2016 and 2017.

But it has a history of financial troubles, as well, including a foreclosure lawsuit in 2013 that alleged the bar owed Bank of America nearly $5.5 million in missed mortgage payments. The suit was settled later that year.

Sahajpal declined an interview request by The Daily at the conclusion of Wednesday’s meeting, which also featured Albion president Jason Koehn’s first appearance in a series of hearings that has slowly progressed the project through the city’s approval process this summer.

Koehn and Yule spent much of the meeting responding to comments and questions posed by Plan Commission members and Evanston residents, the latter of whom largely criticized the project for reasons ranging from its lack of affordability to potentially creating a wind tunnel to violating numerous zoning maximums.

Review of the plans will continue at the next Plan Commission meeting on September 13, when it is expected that the board will vote on the proposal.