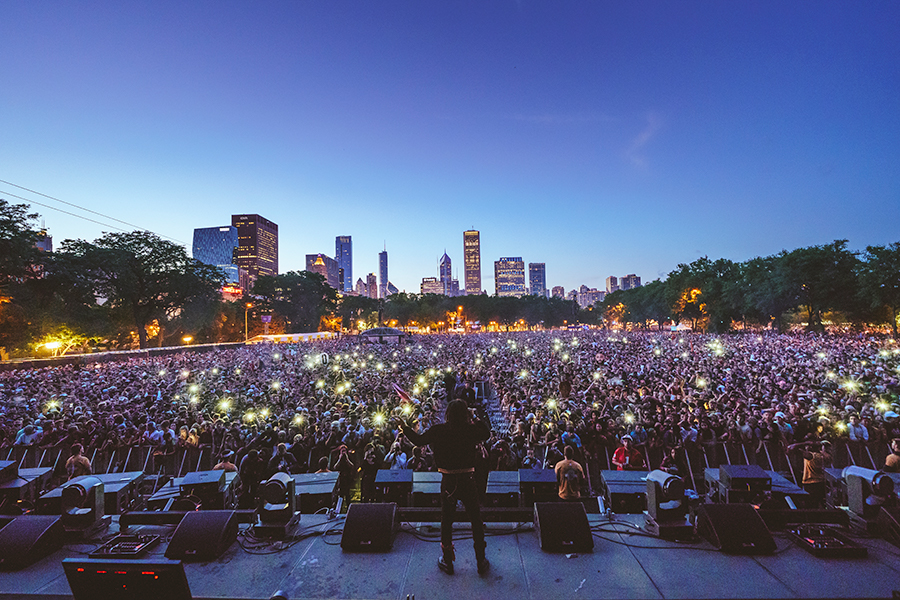 Muse’s “Starlight,” the band’s first massive hit in 2006 and the favorite song of Weinberg junior Mark Scovic, has always sounded a bit like a The Killers song — roaring vocals, heavy guitar during the chorus and an 80s-in-the-2000s vibe.

On Friday night at Lollapalooza music festival in downtown Chicago, it was. With Muse’s Thursday night headline set rained out, The Killers covered “Starlight” — as well as The Smashing Pumpkins’ “Disarm” — as part of their own performance in a surprise move that sent the tens of thousands of fans in attendance into chaos.

“Those covers were pretty special,” Scovic said. “They offered the ‘Starlight’ cover as a bit of consolation, which was cool because there isn’t any other compensation for bad weather.”

After a wet Thursday, three straight days of beautiful weather for the festival flooded Grant Park with an estimated 100,000 daily attendees to watch acts perform from noon to 10 p.m. on eight different stages, including headline acts ranging from Chance the Rapper to The Killers to Lorde.

A tiny percentage, but nonetheless a sizeable number, of those 100,000 were Northwestern students, making the relatively quick CTA Red Line commute to Chicago’s biggest summer event.

Among the throngs of unbuttoned button-downs, crop tops and other prototypical festival attire that crowded a blocked-off Columbus Drive on Saturday was a man in a “Saturdays are for the ‘Cats” shirt and another wearing a Northwestern basketball jersey, showing their NU spirit.

Weinberg sophomore Ryan Callaghan, meanwhile, went for a more ubiquitous look in his Chicago Bulls jersey but said he came partially for the music and partially for a summer reunion with his college friends.

“It just seemed like a fun way to spend the weekend, like a sort of little mini-vacation before we all head back to school next month,” Callaghan said.

Callaghan was accompanied by fellow Weinberg sophomore Justin Williamson, who said he had been coming to the annual festival for years, having grown up in the Chicago area.

Asked about his favorite part, Williamson at first noted the performance by popular EDM artist DJ Snake, then amended his answer.

“Also running into people that I know,” he said. “Not only from Northwestern but also from my hometown.”

The Killers’ show and local rapper-turned-superstar Chance the Rapper’s Saturday night performance attracted easily the largest crowds of the four days, including innumerable students from both NU and other Big Ten schools.

But other acts also proved popular, such as Evanston native Kweku Collins on Thursday, Run the Jewels (who brought a recent Anderson University graduate up on stage in a memorable moment) on Friday and Grouplove on Sunday.

“I have enjoyed it thus far,” he said on Saturday. “(It’s) sort of what I expected but way more people. The park is really pretty, and the artists are great. It rained on Thursday, and it was chaos, but it was part of the experience.”

After Sunday’s final day wrapped up with headline performances by alternative rock giants Arcade Fire and the French EDM duo Justice, both El and Metra trains northbound to Evanston and beyond were packed with high school and college students, returning home after an exhausting weekend.

Weinberg senior Logan Peretz admitted his legs were “definitely hurting,” but said his first-time Lollapalooza experience allowed him to see some of his favorite bands live for the first time — and pick up a few new favorite bands, too.

“The Killers are my favorite band, and I got up to the first couple rows so that was really fun,” he said. “I also got to see some new artists that I’ll definitely be listening to in the future. … Being able to enjoy awesome weather and good music downtown was just the best.”