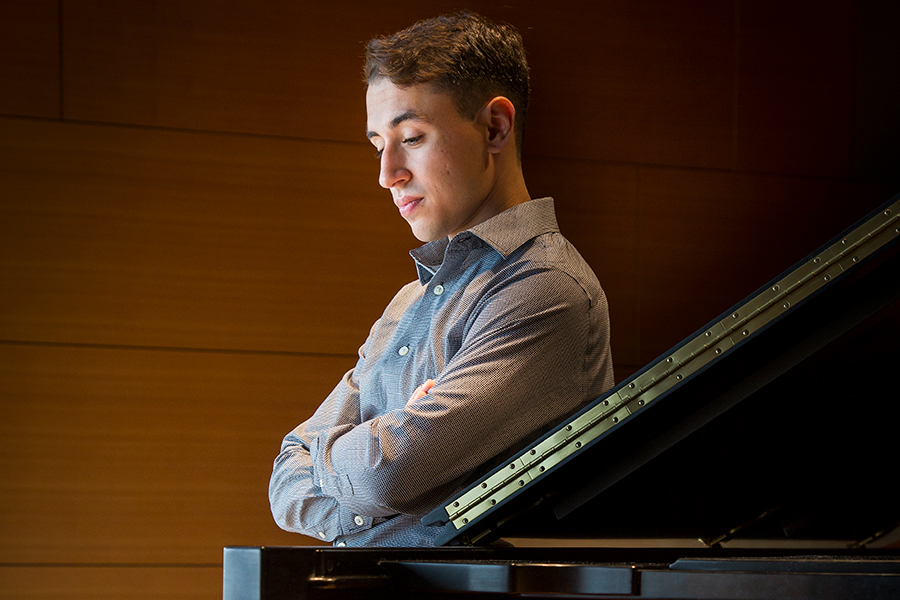 After growing up in a musical household and attending performing arts magnet schools for both middle school and high school, Laucerica came to Northwestern to pursue the Voice and Opera program.

Now, Laucerica is an associate member of the Chicago Symphony Chorus, an accomplishment that earned him a place as one of Northwestern’s recent “Seniors to Watch.”

Laucerica said that though he has “always been a singer,” it wasn’t until high school that he knew he was going to make a career out of it.

“It felt so natural to think of myself as having a future career in music,” he said. “It was what I knew the best, it was what always felt like the thing that I loved the most, but also that I worked the hardest in.”

“There are people who you will hear perform music … that’s very good, and then somehow you’ll hear somebody and it just touches you deeply,” Hansen said. “That’s Frank. He always had that ability, to go to a place where music and art could be very moving.”

While at NU, Laucerica performed in several operas, including “Dead Man Walking,” which was named one of the top ten performances of 2015, according to Chicago Classical Review. He also found his love for new music while participating in the Bienen Contemporary/Early Vocal Ensemble, he said.

Bienen Prof. Theresa Brancaccio, one of Laucerica’s studio class teachers, said the symphony chorus requires singers who have excellent, flexible voices, much like Laucerica’s. Throughout Laucerica’s four years at NU, he grew immensely as a vocalist, she said.

“His voice has matured and warmed up and also developed a really impressive range of notes that he can sing,” Brancaccio said. “I’ve heard him grow in color, in flexibility, and musicality as well.”

Laucerica said his experience with applying for the CSC was a “long series of fortunate coincidences.” When he first saw the audition notice, he didn’t apply because he assumed they wouldn’t accept him as an undergraduate student.

By the time he did decide to apply, the application period had closed but then reopened unexpectedly, he said. On top of that, when he got called in for an audition, his application deposit didn’t come in on time, so the audition was canceled.

However, the chorus manager contacted Laucerica to reschedule an audition because the chorus needed to hear more tenors, Laucerica said. After a successful audition and callback, Laucerica was informed that he had been given a position.

“It’s just kind of been a long series of, ‘Wow, I can’t believe that happened to me,’” Laucerica said. “I’m very lucky. I kind of just can’t believe it’s real.”

There are different tiers of membership in the CSC, Laucerica said. Associate members are typically called upon when a large chorus is needed for a performance, he said.

Hansen, who was also a member of the CSC in the past, said what sets Laucerica apart is not just his vocal ability, but his attitude and warm nature.

“Frank is one of the most genuinely loving people I have ever known,” he said. “That comes out of his music … Now there just so happens to be a wonderful voice attached to it, but it’s really special, his ability to project his genuine care about what he does.”

In addition to his role with the CSC, Laucerica will be performing with Opera for the Young, a touring opera company that puts on productions for children, he said. In the fall, he will also sing with The Crossing, a professional chamber choir dedicated to new music, conducted by Bienen Prof. Donald Nally.

In the future, Laucerica hopes to reapply for a higher membership in the symphony chorus and continue to work his way up in the singing world, he said. Eventually, Laucerica said, he also hopes to return to school to pursue a master’s in voice.