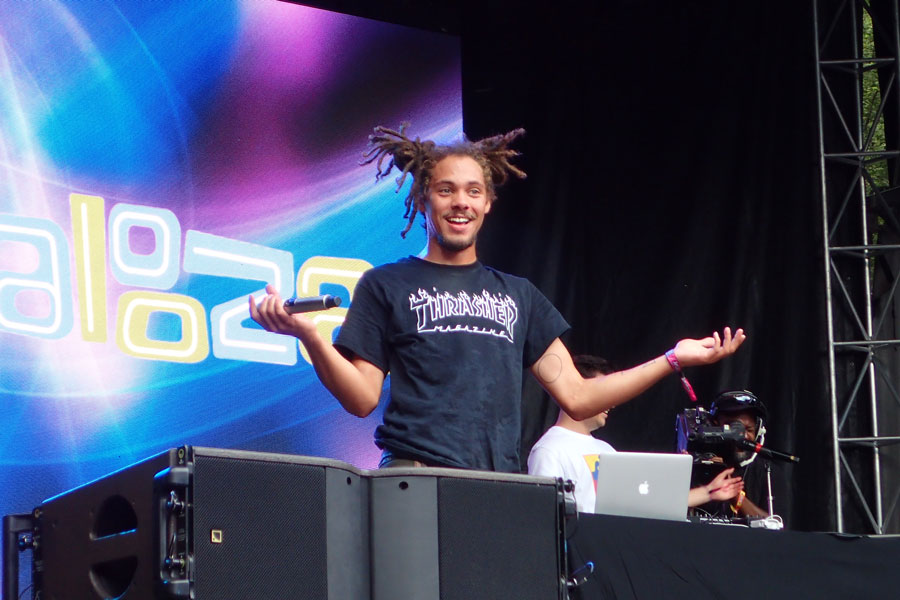 Kweku Collins performs on the Pepsi Stage at Lollapalooza on Thursday. Collins, an alumnus of ETHS, was in the first round of acts to perform at the festival.

Kweku Collins, a 20-year-old Evanston native and Evanston Township High School alumnus, was among the first round of acts to perform, blazing the main stage near Jackson Drive and Columbus Drive.

Collins is a rapper and producer from the North Shore whose music career is rooted in his family and experiences in Evanston.

“His dad is a percussionist, so he grew up playing African drums and stuff like that,” said Collins’ tour DJ Aidan Sigel-Bruse, also known as BoatHouse. “I know that (his father’s music) has got a huge influence on him.”

This influence is especially evident in Collins’ beats, Sigel-Bruse said, many of which are based around “non-traditional rhythms” which expand beyond kick, snare and high-hat.

Sigel-Bruse also works as a producer alongside Collins at Closed Sessions, an independent record label based in Chicago. Since both he and Collins are involved with the same label, Sigel-Bruse said they often find themselves working together on each other’s music in the studio, adding a new layer to their friendship.

In the past year, Collins has visited Europe while on tour with Closed Sessions’s oddCouple, released his latest EP, “Grey,” and has now performed at one of the country’s most popular music festivals.

“We were in the same class together, reading the same books and chatting away,” said Drake, an Evanston resident and classmate of Collins’ in elementary and high school. Drake added that Collins’s music is causing the city of Evanston to “come alive.”

Collins’ connection to Evanston, however, did not end after his time at ETHS. Throughout his performance, Collins occasionally referenced the city and its residents.

During his set, Collins introduced himself as hailing “from the beautiful town just north of here called Evanston.” Later in his performance, he also gave a shout out to audience members from Evanston, who erupted into cheers as he said “E-Town, where you at?”

Drake said even now, Collins’ current success is already reflected through the city of Evanston and his listeners.

“Everyone is having their two cents and I think Kweku’s two cents are honestly important,” Drake said. “His dream, his message and his idea is infecting the youth.”

While performing, Collins sang and danced on stage while sweat dripped down his face from his tied up hair. In between songs, Collins spotted a fellow Evanston local, Katherine Metzner, and called out her name.

Metzner said Collins is a close family friend who used to skateboard with her older brother. After watching Collins perform, Metzner said she foresees him having even greater success in his future.

While they had performed together before, Sigel-Bruse said he and Collins’ Lollapalooza performance was unrivaled by any past shows due their collective energy, adding that he couldn’t thank the crowd enough.

“I’m just thankful for Kweku for letting me rock with him and I’m just stoked to be believing in him and see(ing) where he can take this,” Sigel-Bruse said.