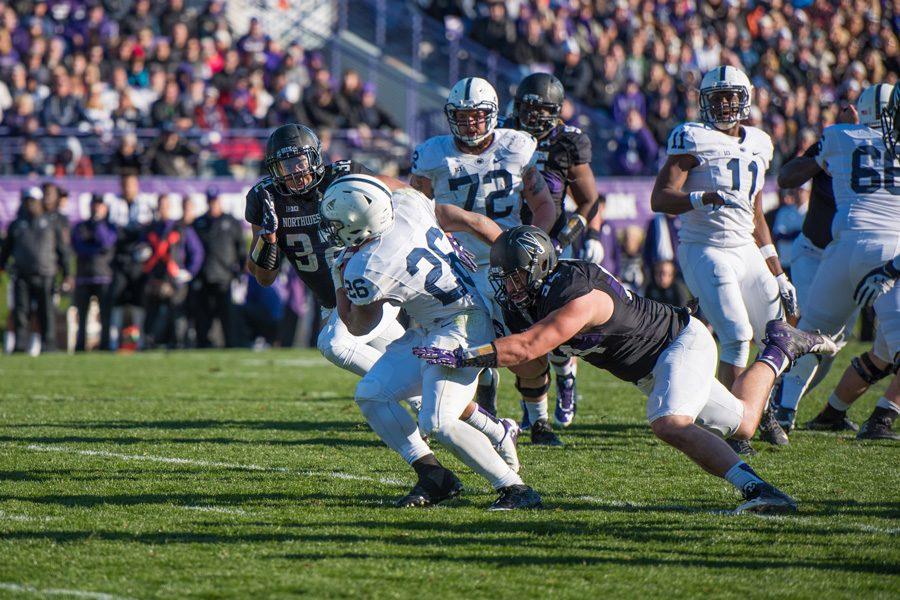 Dean Lowry extends to make a tackle in Northwestern's win over Penn State in November 2015. Lowry, now entering his second season in the NFL, is seeking to find similar success with the Packers.

Under the lights of Lambeau Field on December 11, Packers defensive lineman Dean Lowry detached himself from Seahawks blocker Bradley Sowell, cut into the pocket and saw Seattle quarterback Russell Wilson pull the ball down and try to scramble.

Lowry didn’t let that happen, bringing down the Super Bowl champion and three-time Pro Bowler for a sack — the second of his rookie season in the NFL.

“Here’s a … young player, who was only getting about six snaps a game, and he’s been so productive when he’s had his opportunities that (Green Bay coach) Mike McCarthy said, ‘We’ve got to get him on the field more,’” FOX analyst Troy Aikman said to the national TV audience.

McCarthy followed through on his statement, and Lowry, a former three-year standout at Northwestern, averaged about 21 snaps per game from that Seahawks meeting — a decisive 38-10 win for the Packers — through the team’s eventual loss in the NFC Championship game.

Now, entering his second season, Lowry said he is ready to step into a larger role on the Packers’ defensive line and excited to welcome former NU teammates Anthony Walker and Ifeadi Odenigbo to the NFL.

“It’s really night and day from this year to last year,” Lowry told The Daily by phone Monday. “Last year, you’re still a bit wide-eyed going into training camp, because it’s the NFL and everybody is big and fast and strong. This year, I think I’m more settled down, I realize that it’s just football, and I know what to expect.”

After three years of dominating the Big Ten — Lowry recorded 126 tackles, including 28.5 tackles for loss, from 2013 to 2015 combined — Lowry went to the Packers in the fourth round of the 2016 NFL Draft.

“In college, you could probably find one or two guys that aren’t the best players and take advantage of them,” he said. “There’s really no weak guys in the NFL, and everybody you go against is there for a reason.

Adding to the transition’s difficulty was the fact that the Packers’ base defense is a 3-4, which employs one fewer defensive lineman than NU’s 4-3 base defense did. Given Lowry’s size (6-foot-6, 296 pounds) and lanky arms, he played primarily as an end in the Packers’ less-used 4-3 set.

This offseason, however, Lowry said he’s gained about 10 pounds and worked on his footwork, hand placement and play recognition. He said all of those changes will help him become more prepared to play to inside, where the “game is a lot quicker,” in both the 3-4 and 4-3 sets.

“I had to adjust (to) more playing against the run inside as well as being an effective inside pass rusher,” Lowry said. “This year, I have more mass on me to take on more double-team blocks. I’m more explosive — that first step is very important for a defensive lineman against the run and pass — and I feel like I have a stronger base.”

McCarthy praised Lowry extensively to reporters in Green Bay on Tuesday, implying that he may vie for a starting spot in training camp.

“If you’re looking for an excellent example … of a player taking a jump in his second year, Dean may be near the top of the list,” McCarthy said. “Bigger, faster, stronger. (I’m) anticipating (him having) the ability to play the different techniques up and down the line.”

During the offseason, Lowry, a native of Rockford, Illinois, said he reconnected with his roots, visiting Evanston for two NU spring practices. He also advised his former defensive teammates Walker and Odenigbo through the draft process, helping them land with the Indianapolis Colts and Minnesota Vikings, respectively.

“I told them just to control what they can control,” he said. “The draft process is a really a chaotic thing, but I think those two guys handled it very well … and they both ended up in great places.”

The Packers will face a number of teams with former Cats on their rosters this autumn, including Odenigbo’s Vikings twice, Dan Vitale’s Cleveland Browns in early December and Trevor Siemian’s Denver Broncos in the third week of the preseason, and Lowry said he’s excited for those reunions.

And as far as NU’s football season, Lowry said he’ll follow along — and that he has high hopes for it, too.

“With the offense with Clayton (Thorson) and Justin (Jackson), and also the strength of the defensive front and the defensive backs, I think they’re going to have a great season,” he said.