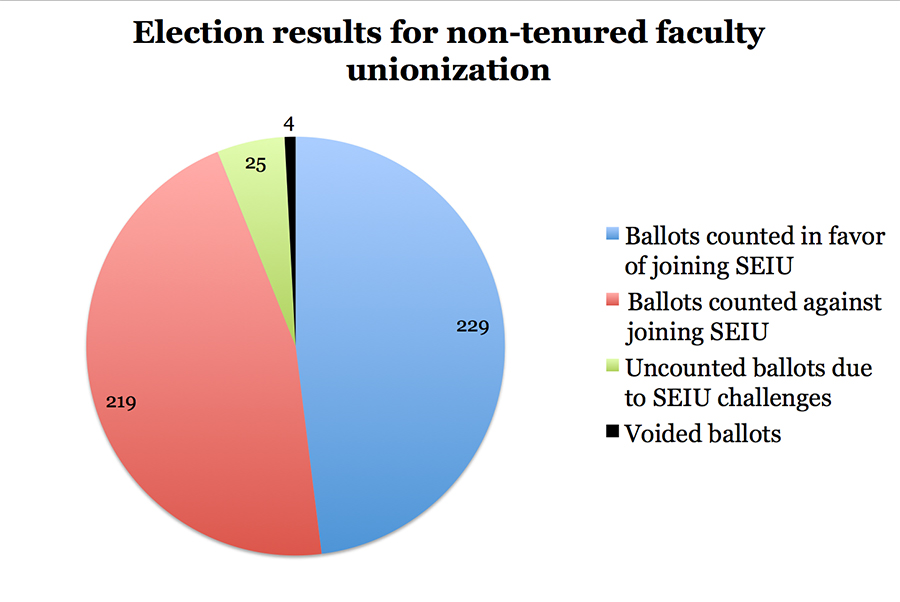 Northwestern will not bargain with the Service Employees International Union, a workers union which non-tenured University faculty recently voted to join, because of contested ballots that were not counted in the vote, according to a letter to such faculty.

An additional 25 ballots were not counted because they were challenged by the SEIU and the individuals who cast them were “found to be ineligible” by Chicago NLRB regional director Peter Sung Ohr, according to the document. Since the challenged ballots were considered ineligible and the counted ballots showed a majority of voters in favor of unionization, the NLRB certified the SEIU as a valid representative of the non-tenured faculty on May 26.

Northwestern administrators, however, disagree about the status of the 25 voters deemed ineligible by the NLRB and have appealed the decision to the NLRB, University spokesman Al Cubbage said. The appeal is still pending.

“The votes are from Northwestern faculty members who were allowed to vote in the election. Therefore, their votes should be counted,” Cubbage said. “We believe that the voices of our faculty members should be heard and that the outcome of the vote should reflect the will of the majority of voters.”

A letter sent Thursday to non-tenured faculty by Provost Daniel Linzer and Provost-Designate Jonathan Holloway states that NU has “notified the SEIU that (the University) would not grant its request to begin bargaining because the election result is not final.”

The letter states that NU has urged the SEIU to drop its challenges to the 25 ballots, a decision that Cubbage said will allow the ballots to be counted and the current stalemate to be “concluded quickly.”

Jeffrey Howard, chief of staff at SEIU Local 73 — a Chicago-based SEIU branch that would represent the NU employees — said Friday, in a statement sent through a spokesman, that NU “is at risk of committing an Unfair Labor Practice” by failing to comply with the NLRB’s decision to grant bargaining rights to the SEIU.

The original unionization election took place in June 2016, but the results were delayed by a series of ballot challenges by both the SEIU and NU, many of which were later overruled. In August 2016, before any challenged ballots were counted, the vote stood at a more decisive 223-191 in favor of unionization, according to the May NLRB document.