Football: Dickerson could be elixir for experience-lacking receiving corps 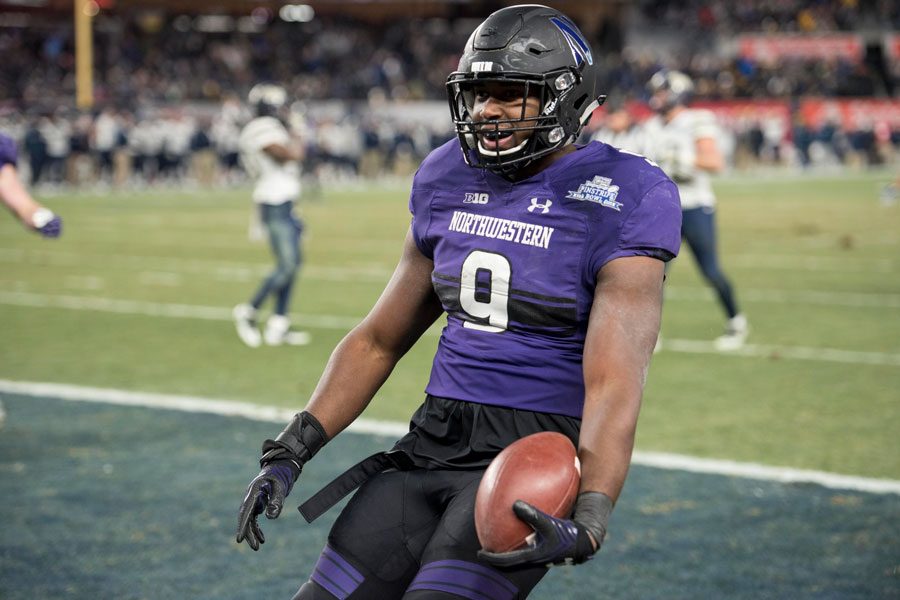 Garrett Dickerson celebrates after scoring the go-ahead touchdown in the Pinstripe Bowl. The superback is expected to be a leading receiver for the Wildcats this season.

CHICAGO — When the watch list for the Mackey Award, given annually to college football’s best tight end, came out earlier this month, 55 names were on it.

Northwestern senior superback Garrett Dickerson was not one of them.

“I was a little shocked that he wasn’t put up for the Mackey Award, but that’s OK — it’s an end-of-the-year award and he can go out and earn it,” coach Pat Fitzgerald said.

Added junior quarterback Clayton Thorson: “He wasn’t on that Mackey Award list, I heard. I think it’s because he’s a superback on the roster, but he’s really a tight end, and he’s going to be a good one in the NFL, too.”

Dickerson, a 6-foot-3, 240-pound superback — NU’s term for its tight end-esque hybrid position — who has seen the field frequently dating back to his 2014 freshman year, will be arguably the most experienced target for Thorson this season.

The only senior expected to play significant minutes at receiver this year, Macan Wilson, didn’t record his first career catch until last season.

“(Garrett’s) first two years, he was a great blocker and caught a few passes, but last year even more in the passing game,” Thorson said. “I’ve seen this offseason how hard he works, and I’ve gotten in some extra work with his routes. I think he’s going to be one of our top receivers.”

Dickerson evolved into more of a receiving threat particularly in the second half of the 2016 season.

Over the last six games of the year, Dickerson led NU with four receiving touchdowns and ranked second on the team with 23 receptions, behind only recent graduate Austin Carr. That stretch included an eight-catch breakout performance in the Cats’ near-upset of Ohio State, a 42-yard touchdown against Purdue and a critical 21-yard touchdown in the fourth quarter of the Pinstripe Bowl.

But Dickerson didn’t get as much credit for that late-season surge as he deserved, senior safety Godwin Igwebuike said — another perceived snub for the New Jersey native.

“He had a pretty good season last year, (and) I don’t think he got as much props as he needed to last season, but that just added some fuel to that man,” Igwebuike said. “That man has been grinding and I expect him to come out this next season and really make a statement.”

Both Igwebuike and Fitzgerald named Dickerson alongside Thorson and senior running back Justin Jackson as the leaders of NU’s 2017 offense.

Fitzgerald said that Dickerson’s versatility will help ease the blocking burden on the offensive tackles, a unit which Fitzgerald lambasted, and give Thorson a reliable go-to option while he builds chemistry with the remade receiving corps.

“He can play in line, he can flex out, he can play in space (and) he can block defensive ends and outside linebackers,” Fitzgerald said. “We had Drake Dunsmore, we had Danny Vitale, and now I think it’s Garrett’s turn to become a household name in this league.”