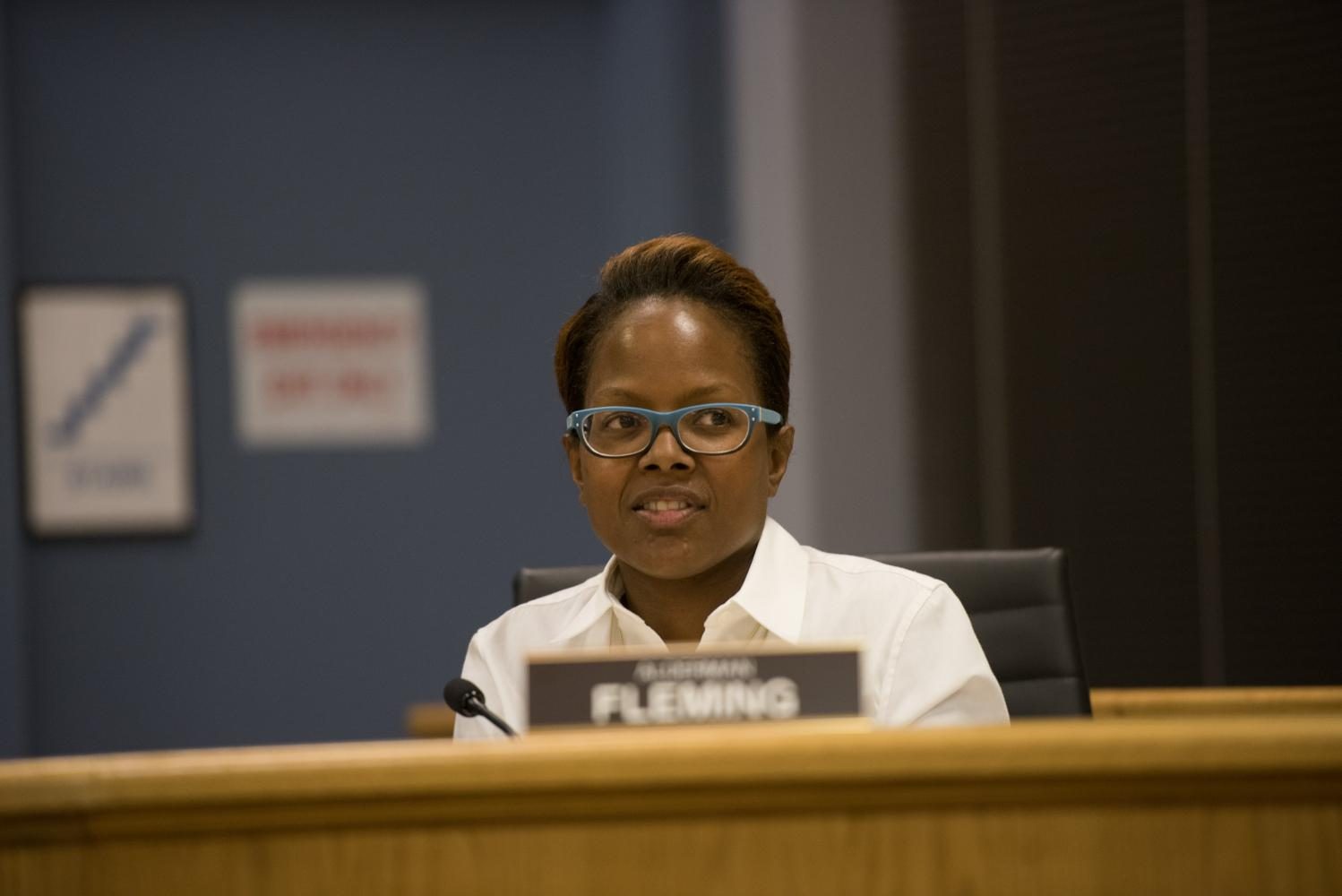 Ald. Cicely Fleming. Fleming expressed her opposition of the adoption of the resolution to settle Shannon Lamaster v. City of Evanston et al.

It took Jerome Summers, the uncle of new alderman Cicely Fleming (9th), a while to list all of the notable Evanston politicians in Fleming’s family lineage — a lineage that dates back to the 1890s in the city.

But it took him only two breaths to describe the impact of that lineage on his niece.

“She has this leadership thing in her blood,” Jerome Summers said. “She understands it on a cellular level.”

Drawing from her family’s legacy of making change — but simultaneously frustrated by what she saw as a lack of evident improvement in the lives of Evanston’s less wealthy and non-white residents — Fleming launched her campaign for 9th Ward alderman last October and, six months later, received more than 66 percent of the vote in a decisive victory over candidate Shawn Jones.

Now, two months since being officially sworn onto City Council in May, Fleming has made her no-punches-withheld voice heard, learned a few lessons about the challenges of government and geared up for what she says is her biggest crusade yet.

Growing up in the 5th Ward — as her family had for generations — Fleming attended the nearby Dr. Martin Luther King Jr. Literary and Fine Arts School, then colloquially known as “King Lab” and a predominantly black school.

“We sang ‘We Shall Overcome’ and different things like that everyday, so that was a great experience for me, just having an education that was a little more relevant to the African-American experience,” Fleming said.

A desire to continue that experience into college temporarily pulled Fleming away from her family’s geographic footprint. She enrolled in and graduated with a degree in sociology from Shaw University, a historically black college in Raleigh, North Carolina, before beginning to raise a family.

But eventually, Fleming couldn’t stay away, and she moved herself and her family back to Evanston in 2014.

“When you’re young, you can’t wait to get out of here, so she did,” Summers said. “The benefit of that is, when you come back you have some perspective, you have some distance from the things that you did before.”

Distance, perhaps — but, as Fleming soon learned, certainly not disengagement.

“Things like socioeconomic divides and racial divides, I grew up hearing a lot about that,” she said. “I was surprised that some of the things I heard my parents and grandparents talk about, particularly in terms of race and segregated living, were much the same.”

A busing-for-integration system, the implementation of which Fleming’s mother experienced as a student, was still going on 40 years later.

Several traditionally diverse wards, such as the 2nd and 8th, were undergoing dramatic gentrification.

And, from Fleming’s perspective, City Council was still making policies based on narrow viewpoints — a downfall she attributed to their narrow range of backgrounds.

“If you’ve never been a woman or poor or African-American or discriminated against or felt that you’ve been overlooked, then you don’t make decisions that model that,” Fleming said. “That was a huge frustration for me when I would see decisions that were made that I felt like would benefit only a certain demographic of our population.”

From activist to alderman

Fleming said she soon realized that she could “either complain or … do something that (she) thought was the most impactful and beneficial” about Evanston’s issues.

She co-founded The Organization for Positive Action and Leadership, a political activism and voter outreach organization aimed at underrepresented groups, and then began to turn her eye toward running for an elected position herself.

It didn’t take long, however, for a second chance to arise. Burrus’ replacement, Brian Miller, decided to run for mayor this year, leaving the 9th Ward alderman spot vacant again.

This time, Fleming pounced at the opportunity, seeking to follow in the footsteps of her great-grandfather, great-aunt and uncles.

“The sense of duty came from my family,” she said.

During her campaign, she criticized the existing council for issues ranging from charging fees to access city beaches to not acting quickly enough to address racial imbalances in school suspensions and stop-and-frisk instances.

Along the way, Fleming received logistical advice from Grover about council protocols and philosophical advice from Summers about the pitfalls to avoid when operating under a public spotlight.

On Election Day, it paid off with a comfortable 33-point victory.

Considering the tornado of separate, ongoing storylines — reopening the search for a Harley Clarke Mansion owner, monitoring the Illinois budget crisis, juggling the Cook County minimum wage increase — that has enveloped Council in recent months, Fleming said she hopes the community is realizing the importance of its local government.

“I am hopeful that more people are paying attention and that will really engage our citizen base to really hold us accountable,” she said.

Fleming has already led successful initiatives to stop the city from publicly releasing mugshots of arrestees and to add several crosswalks in the 9th Ward.

She’s also sought to make water utility shut-off notices include instructions about how to start paying the bill, and to add a Spanish-speaking employee to the City Collector’s office — changes she said were “like a no-brainer” to her but not so obvious to the rest of the staff.

Not everything has been smooth sailing. Fleming said she’s been frustrated by Council’s slowness, which she expected, and lack of a consistent process, which she found more surprising. And, she said, her willingness to be blunt and direct with her statements has occasionally landed her “on her own” among the aldermen.

Yet Grover believes Fleming’s skill set has already, and will continue to, make her a well-suited member of Council.

“To be on the City Council, you have to go broad and deep on everything, and Cicely certainly can do that,” Grover said. “She brings good perspective on inclusiveness … as an overlay to all city operations. But that’s just part of it. She will understand everything from public works projects to annual budgeting to municipal borrowing.”

Fleming is just getting started with her biggest campaign, too: pushing for equity for underprivileged Evanston residents.

An equity discussion consumed the majority of a marathon July Council meeting and Fleming said she still has a lot of questions moving forward, especially regarding how to translate such discussion into concrete effects and policy.

Fleming said she’s realistic about the impossibility of accomplishing everything at once. But, she said, she’s hoping to create change one step at a time and, in the meantime, earn the trust of the voters who gave her a seat.

“I hope that the community, even if I’m on a losing vote, will know that I brought their voice to City Council and that I’m authentic in that way and that they can count on me to do that,” Fleming said. “I think that’s most important.”