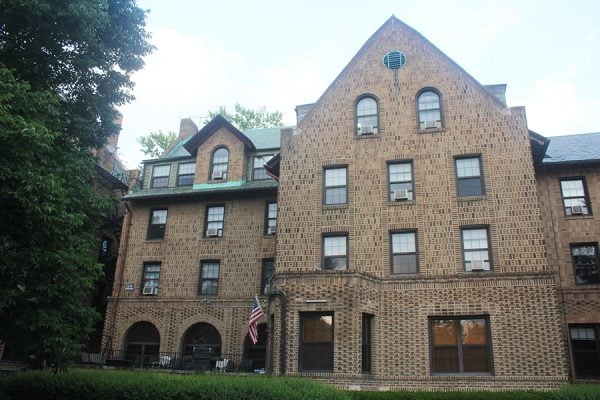 Sigma Alpha Epsilon fraternity’s house on Northwestern’s campus. An exterior sign, which formerly displayed SAE's letters above the alcove, has been removed.

The Northwestern chapter of the Sigma Alpha Epsilon fraternity will remain suspended until Sept. 1, 2018, said University spokesman Al Cubbage in an email to The Daily.

The University suspended the chapter in April after the fraternity “knowingly violated” its disciplinary probation earlier this year. Back then, University spokesman Bob Rowley said an investigation into the chapter found SAE had been “repeatedly hosting parties and providing alcohol to minors.”

In the email to The Daily, Cubbage said an appeal hearing for the fraternity determined no procedural errors of those findings and offered no new evidence to present a case against the suspension.

“The safety and well-being of Northwestern students is our first priority, and we will continue to enforce the University’s disciplinary code to ensure that student safety is not compromised,” Cubbage said.

A sign that formerly displayed SAE’s letters on the rear exterior of the house appears to have been removed.

The chapter had been placed on probation following a conduct investigation in fall 2016, Rowley said back in April. The disciplinary probation was set to run out at the end of 2017, he said.

The suspension came after another, separate investigation into the fraternity earlier this year. In February, the University alerted students that the Sexual Harassment Prevention Office had received an anonymous report that four female students had possibly been given a date rape drug at the SAE house on Jan. 21. The report said two of the students believed they were sexually assaulted.

No disciplinary action was taken against the chapter for those accusations following a University review of those reports. In an email to students sent late March, vice president for student affairs Patricia Telles-Irvin said NU had begun the separate investigation into potential violations of the Student Code of Conduct that ultimately led to the fraternity’s suspension.

Northwestern offered on-campus housing to SAE members, Cubbage said. He said he does not know how many of them accepted the offer.

IFC president Rodney Orr, a SESP senior, told The Daily that if the administration did not find a reason to overturn SAE’s suspension, it was within their “jurisdiction.” IFC, he said, remains “committed to changing (its) internal culture.”

Orr added that, once the suspension is over, SAE will have to most likely be reinitiated through IFC and its national headquarters in order to re-join Northwestern’s Greek community.

Manos Proussaloglou, Northwestern’s SAE president, could not be immediately be reached for comment.

This story was updated at 10:00 p.m. with comments from Orr.