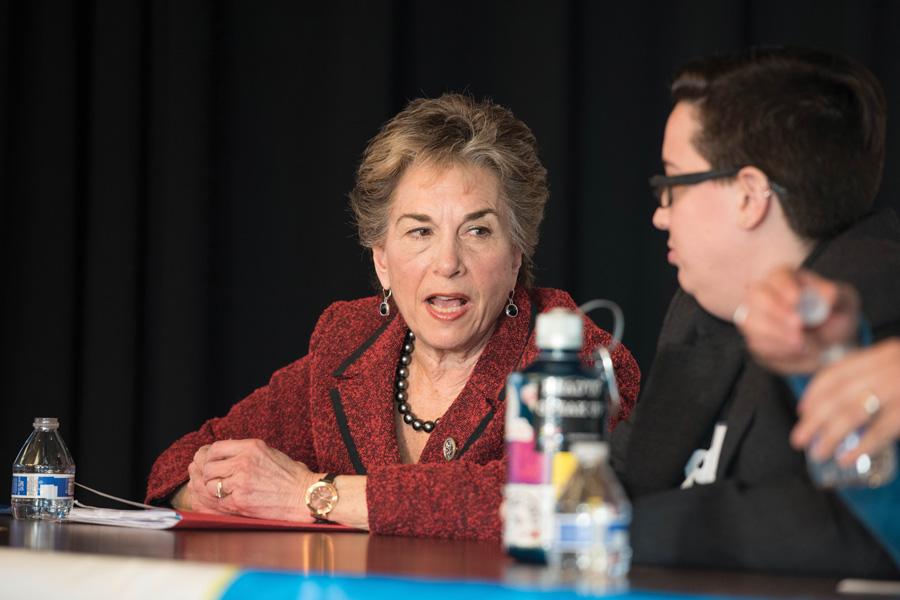 U.S. Rep. Jan Schakowsky (D-Ill.) speaks at an event in February. Schakowsky was one of several notable politicians to criticize Evanston Mayor Steve Hagerty for calling a Friday special session of City Council to consider opting out of the Cook County minimum wage increase.

A joint statement released by local officials, including U.S. Rep. Jan Schakowsky (D-Ill.), Cook County Commissioner Larry Suffredin and State Sen. Daniel Biss (D-Evanston), opposed any opt-out in “the strongest possible terms.” The officials called for Evanston to do its part to raise the standard of living for community members.

“Evanston has long led the charge in fighting for progressive causes, from civil rights to environmental sustainability to economic justice,” the statement reads. “Blocking these pro-worker policies would not only be inconsistent with our values: it is an insult to Evanston’s working families and an affront to our community.

Former aldermanic candidate Alex Morgan also voiced his displeasure with an open letter that referenced a municipal vote in November 2014 that found over 87 percent of voters supported a $10 minimum wage.

Hagerty defended the decision in a statement posted to Facebook, and apologized for scheduling the meeting at an “inopportune” time. He said he wanted to make it “absolutely clear” that he supported a $15 an hour minimum wage and paid sick leave.

“I called tomorrow’s meeting so that — regardless of my own personal viewpoints — all stakeholders and members of the Evanston community can share their views on what we all agree is a very critical and timely issue,” Hagerty said in the statement.

The emergency City Council meeting is scheduled for 10 a.m. Friday.