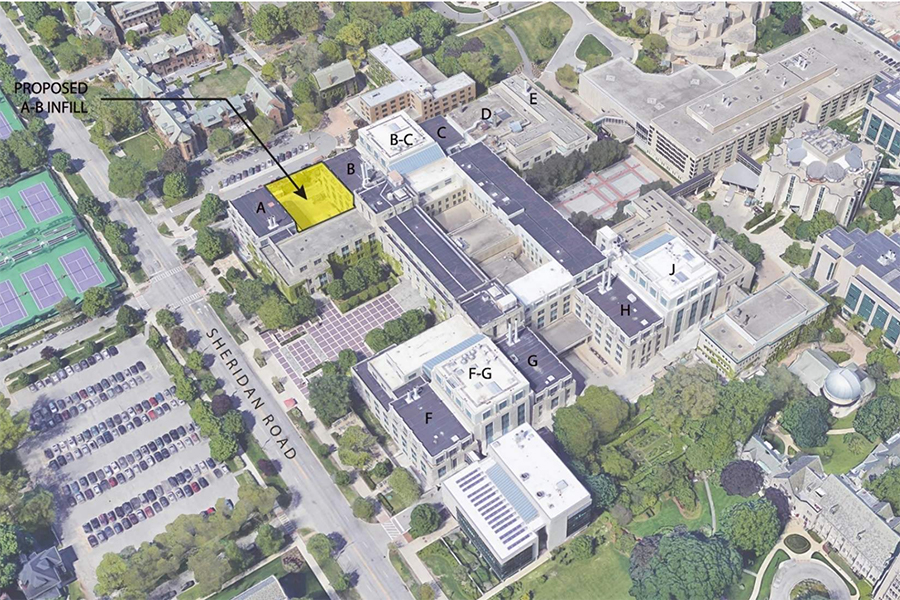 The current satellite view of the Technological Institute, with the proposed location of the new infill shown in yellow. The addition will be one of several to be built since 2008, architect Mitchell Fox said.

Proposals to build an addition to the Technological Institute and to renovate the Phi Gamma Delta fraternity house were presented to and approved by the city’s Design and Project Review Committee on Wednesday.

Architect Mitchell Fox presented a plan to build an “A-B” infill between the existing A and B wings of Tech in the northwest quadrant of the building. The new addition will be five stories tall, although the fifth story will only house mechanical equipment.

Several additions since 2008 have filled many of the indentations in Tech’s puzzle-like floor plan. The A-B infill, which Fox said he expected to be finished sometime in 2018, will fit in the final remaining indentation on the building’s north side; one indentation, between the G and H wings, remains on the south side.

Architect Daniel Weese then presented a plan to renovate the Fiji fraternity house in order to improve the facilities and accessibility of the building, which was originally built in 1912.

The house’s exterior renovations will be minimal, adding only a ramp to the front door, a rear porch and a small fire escape. Weese said the plans sought to maintain as much of the original architecture as possible, replicating the original brickwork and door engravings.

Inside, the renovations will be more drastic, including relocating the kitchen, installing new air conditioning and electrical circuits and removing a bathroom.

“There’s a lot of construction going back into the building, and getting it to work within the confines of the existing shell was a bit of a challenge,” Weese said. “Our focus really … was to try and find ways of introducing all these new systems while minimizing the impact to the building and its surroundings.”

The committee approved both proposals unanimously.