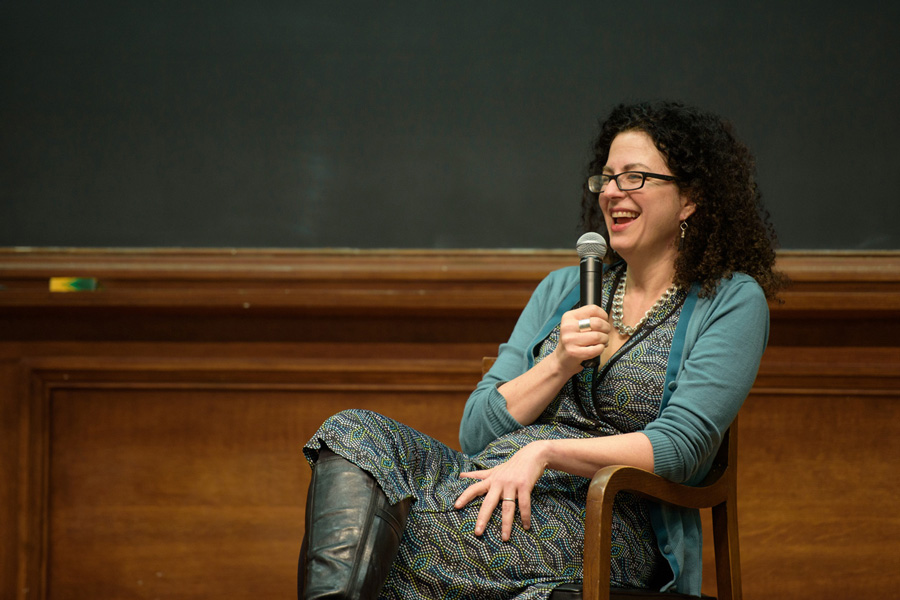 Two iconic television shows launched in the ’90s — “Buffy the Vampire Slayer” and “The Sopranos” — inspired Emily Nussbaum to become a television critic.

“I got passionate about ‘Buffy the Vampire Slayer,’ and that’s where the story begins,” she told a crowd of about 50 in Harris Hall on Thursday.

The acclaimed television critic for The New Yorker spoke about the nuances of television criticism, her work and television under President Donald Trump’s administration during an event hosted by Contemporary Thought Speaker Series. Nussbaum won the 2016 Pulitzer Prize for criticism and has written about shows such as “Scandal,” “Girls” and “Mad Men.”

“I feel like we have a lot of speakers on campus that are often related to film,” Rose, a Weinberg senior, said. “But hearing someone talk about television, in a critical sense, is a perspective that we often don’t get to hear.”

Nussbaum, who has a master’s degree in poetry, said she dabbled in social work and political activism before becoming an editor for New York Magazine.

At one point, Nussbaum also wrote poetry and book reviews for The New York Times Magazine.

She said after some time, she realized she did not want to write about poetry anymore because the poetry world was small. Nussbaum said she switched to writing about television because it was the “opposite” of poetry.

“It was made for a mass audience, for enormous amounts of money, collaboratively, and people always overpraised anything that showed the slightest bit of ambition,” she said. “I felt comfortable writing about television.”

When making the switch from New York Magazine to The New Yorker, Nussbaum said though she toned down the wit in her writing to fit The New Yorker’s style, she still managed to hold onto her own voice. She added that although she does not have a background in cinema studies, her poetry background has been helpful in writing criticism.

Though Nussbaum enjoys writing comedy reviews more than drama reviews, she said the former are harder to write because it’s difficult to describe why something is funny. Unlike some critics, Nussbaum also said she does not “love” writing negative reviews, but taking a side is important.

“It’s boring to write a review that’s like, ‘I’m going to be even-handed’,” she said. “You have to be making some kind of case and have that bullying, theatrical part of it.”

Referencing the election, Nussbaum said she was “not happy about it.” During election time, she said she was absorbed by the comfort of certain shows. These shows, including “The Crown” and “Search Party,” did not directly deal with politics, but instead dealt with different manifestations of power, she said.

“I always saw criticism as trivial and parasitic, not in a bad way,” she said. “But after the election … I said wait, it’s central … it has this emotional quality. I ended up feeling like it’s a valuable thing to do.”

Other than a piece on Fox News and Megyn Kelly, Nussbaum said she has generally stayed away from writing about politics or Trump as a television star. She added he represents all the negative things about television, especially his promotion of ratings over quality.

Medill sophomore Andrew Stern, who enjoys writing movie reviews and attended the event, said they have been following Nussbaum’s work for a while. Stern added they followed Nussbaum on Twitter because of a “mutual hate for Top 10 Lists.”

“I felt like it was a good combination of talking about how she built her career and her own views on TV and writing,” Stern said. “I was very glad that the discussion wasn’t oriented on TV itself, but rather a critical discussion of TV.”