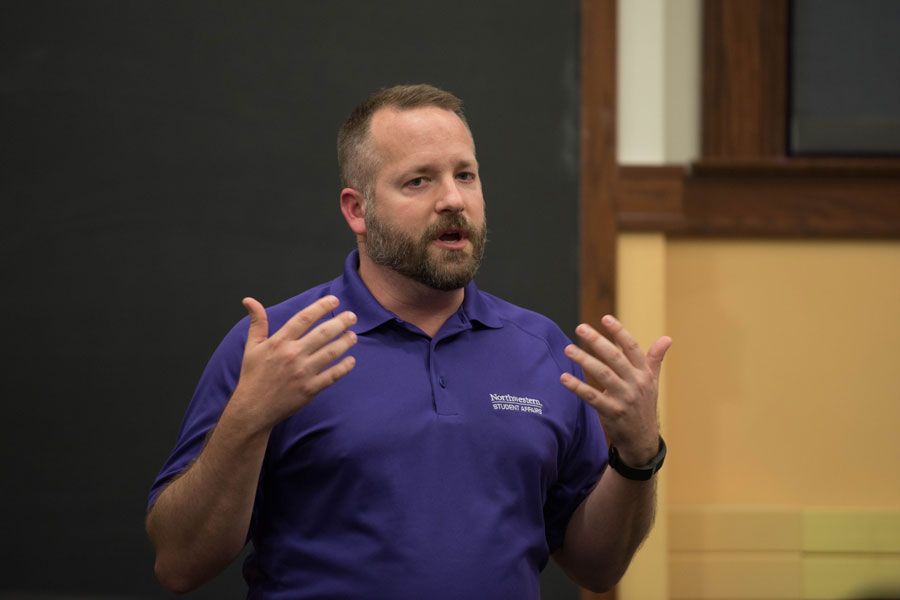 Northwestern administrators listened to students voice concerns about a distrust between alcohol-serving student groups and the University during a town hall hosted by Associated Student Government.

About 50 students gathered in Harris Hall to discuss the student group alcohol policy. The town hall aimed to give students the opportunity to make suggestions on improving the University’s event registration policy, executive director of campus life Brent Turner said.

With the implementation of a “beefed up” event registration policy coming this fall, Turner said he hopes the gap between administrators and students will be bridged as students see their suggestions addressed in the updated policy.

“The goal is not big brother; the goal is safety and wellness,” Turner said.

The current student group alcohol policy — which went into effect in September 2016 — allows groups to serve alcohol to people over the age of 21 if the alcohol is monitored by a third-party bartending service and the University has been informed of the event’s time, date, location and risk-management plan.

“We are engaging in some crucial dialogue with students as partners in the process,” Turner told The Daily. “What we’re focused on is how to streamline the effectiveness of procedure and registration forward in the fall for all groups who want to host events with alcohol, on or off campus.”

Turner said the policy, which allows groups to contract a vendor, such as Sodexo, to either sell alcoholic drinks or monitor drinks brought into a party by attendees has already been followed by student groups such as Mayfest, Northwestern University Dance Marathon and A&O Productions.

Next year, Turner said he would like other on-campus organizations — including fraternities and sororities — to also follow the policy. He said Greek organizations are often part of national networks that assume some liabilities, which reduces the chapters’ reliance on the University.

Mulukutla said one of the town hall’s purposes was to find incentives for student groups to want to register their alcoholic events.

One incentive is that the University can absorb some of the risks involved with hosting such events on behalf of student group hosts, Martin said.

Turner said the University may also be able to allow groups to rent party venues at lower costs by guaranteeing a number of events to the venue.

“We’re trying to curb the shady, underground binge-drinking culture that we know about when we hear aggregate data from University-based alcohol counseling services,” Turner said.

Although the University can help student groups to some extent, Martin said events that illegally serve alcohol to minors cannot be sponsored. The policy in regard to underage drinking remains oriented toward prevention instead of risk reduction, he said.

Despite the existence of the student group alcohol policy, Mulukutla said she feels the prevalence of an “underground” drinking culture pushes some communities away from safety. To reverse that trend, ASG plans to submit a best practice paper to University administrators based on student feedback from Wednesday’s town hall, she said.

“I really appreciated how much turnout we had for this and how engaged students were in the process of asking questions and giving feedback,” Mulukutla told The Daily. “The only way we’re going to have a policy that adheres to what we need and want as students is if we bring our voices to the table.”

Weinberg senior Jacob Kerr, one of several Greek life members present at the town hall, told The Daily he wants to support a safer, more reasonable University alcohol policy. However, he said he had mixed opinions on the plans discussed for the fall.

“It’s a really good start, but it’s one step, and there are about a thousand more steps to go,” Kerr said. “We all need to collectively come together and figure out what those steps look like.”