The Daily Northwestern • May 28, 2017 • https://dailynorthwestern.com/2017/05/28/campus/some-students-who-protested-ice-representative-undergoing-universitys-conduct-process-lawyer-says/ 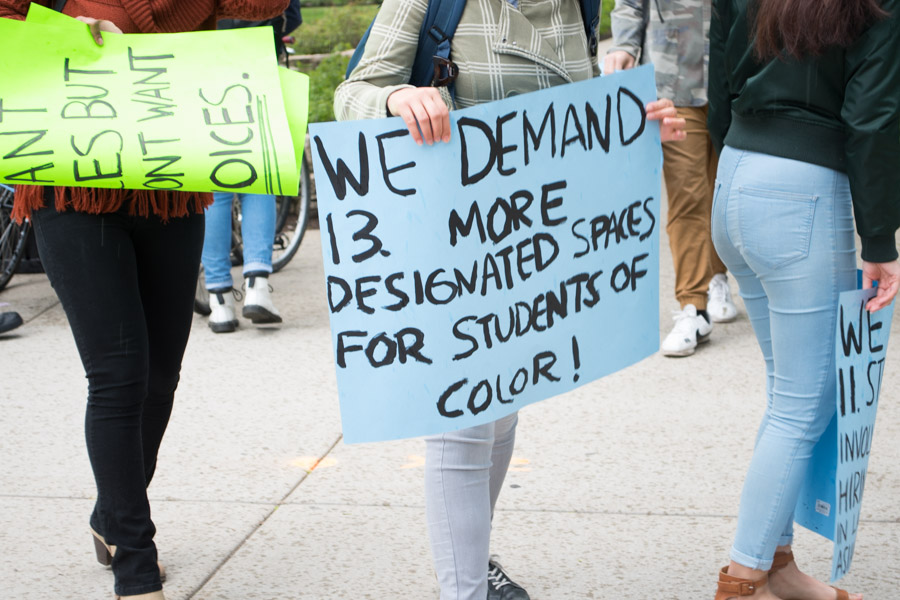 A student holds a poster during a silent protest held Friday outside Scott Hall. Following a May 16 protest against an ICE public relations representative, some student protesters are going through the University's conduct process.

Some students who stopped a guest lecture by a U.S. Immigration and Customs Enforcement public relations representative on May 16 are going through Northwestern’s conduct process, said Lam Nguyen Ho, a lawyer representing the students.

Nguyen Ho told The Daily the University is in the initial stages of pursuing a formal resolution under the procedures of the student handbook.

“The University has not indicated yet that they’re going to pursue any sanctions against the students or any punishment,” Nguyen Ho said. “Based upon our understanding of their position, they’re going through a formal resolution process, which may or may not lead to them seeking punishment against our students.”

Nguyen Ho, executive director of Chicago-based legal aid organization Community Activism Law Alliance, said he couldn’t specify how many students are being reviewed by the University. Nguyen Ho is the lead lawyer in the case, joined by three other people on his team. He said his organization is representing “approximately five students,” but added there may be more students facing disciplinary action who are not being represented by CALA.

Nguyen Ho said he and his team are worried that the University is judging the students under review over a protest he said got out of their hands.

Nearly two weeks ago, a group of student demonstrators interrupted a Sociology 201 class because sociology Prof. Beth Redbird, who teaches the class, had invited an unnamed ICE public relations representative to give a lecture. At the time, demonstrating students said the representative’s presence on campus was hurtful and triggering for those who may be undocumented or who’ve had a loved one be detained by ICE.

The student petition also asks that the University get rid of E-Verify, an application “that compares employees’ information to data from the U.S. Department of Homeland Security and Social Security Administration records to confirm employment eligibility.”

Sponsored by the Coalition of Students for Immigrant Justice, the petition said the decision to reiterate these demands was sparked by Redbird’s decision to bring the ICE public relations representative to campus.

Both Redbird’s invitation and the protest drew criticism from different NU communities. The Latina and Latino Studies Program and the Asian American Studies Program issued a statement in support of the students under review, saying though they honor academic freedom and a professor’s liberty to invite guest speakers to campus, “the presence of an ICE representative at Northwestern represents something beyond academic freedom. It compromises the safety of some of our more vulnerable students.”

Groups outside Northwestern, including Organized Communities Against Deportation, have condemned the University’s actions against students who organized the protest. In a statement, OCAD members said they were also invited to the class by Redbird but declined the opportunity after being told that they could be “questioned on the morality of immigration” and that an ICE representative would be speaking to the class on another day.

“We decided against contributing to this class as it was not the best use of our resources to engage with a professor who expected us to justify (or excuse) our existence and resistance,” OCAD wrote in the statement.

Redbird told The Daily she has received “numerous statements” of support from faculty around the country and internationally. She said some classes deal with uncomfortable topics, and it is the faculty’s job to expose students to knowledge instead of hiding it from them.

In an email sent to students after the protest, University President Morton Schapiro and Provost Dan Linzer condemned the protesters’ behavior, calling it “disrespectful” and “inappropriate.”

“While we understand the point of view expressed by the students protesting the guest lecturers invited to speak here, the resulting disturbance not only limited the academic inquiry central to our campus, it also forced invited speakers to leave and violated the rights of other enrolled students who were present to learn,” Schapiro and Linzer wrote.

Nguyen Ho said his organization decided to take up the case because it was “outraged” that Northwestern would consider any disciplinary action against the student protesters.

“This is a classic example of students responding to a situation that they feel very threatened by, very much traumatized and in pain over, because a space that they considered a safe place and a supportive environment for their education was threatened by the presence of an institution, a governmental agency, that has caused so much harm and so many atrocities against their families and their communities,” Nguyen Ho said.

The University, Nguyen Ho said, should have provided support to students, especially in this “extremely volatile and difficult political climate,” which he said is threatening for “minority students, students of color, immigrant students and just anyone who’s experiencing the frustration and challenges of the new administration.”