The Daily Northwestern • May 24, 2017 • https://dailynorthwestern.com/2017/05/24/lateststories/applause-for-a-cause-to-screen-new-film-raise-money-for-apna-ghar/

Applause for a Cause to screen new film, raise money for Apna Ghar 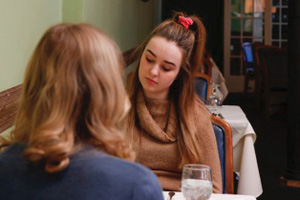 Communication freshman Alison Martin, who plays the character Carrie Helsing, and Cheryl Golemo, who plays character Nic Helsing, perform on set for “Helsing” at Chef’s Station in Evanston. The film, which is Applause for a Cause’s newest release, will premiere on campus on Friday.

In Applause for a Cause’s newest film release, a young mother must figure out how to protect her daughter from a looming supernatural threat while confronting past abuse and her own demons.

Applause For A Cause, a campus organization that produces feature-length films, will premiere its seventh film, “The Helsings,” at two showings in Ryan Auditorium on Friday.

The film is told through the eyes of Nic, a mother and survivor of domestic abuse. For the bulk of the film, it’s unclear whether Nic is a reliable narrator, Gilchrist said. Nic struggles to overcome her past and reconnect with her daughter Carrie while trying to protect her from a perceived supernatural threat, Gilchrist, a Communication junior, said.

“We are really excited about Taylor’s script because it’s a deeper script than what Applause has done in the past, but it’s still doable with a micro budget and our coursework,” Labovitz said.

Applause chose the script from submissions it received from Northwestern students. The producers and directors selected Beck’s script in August and worked with them throughout Fall Quarter to develop it. Once they finalized the script and recruited a team, they filmed for seven weekends during Winter Quarter, working 12 hours per day on average, Labovitz said.

The film’s production process was lengthier and more involved than those of past Applause films, said Communication sophomore Alex Stone, Applause’s marketing executive. The co-directors, their crew and a mix of student and professional actors filmed around local businesses and in residences of friends and family, he said.

They also worked to make sure all the technical elements of the film supported the theme of sexual violence.

“There are moments where the film deliberately tries to be disorienting and uncomfortable to communicate that, and to try to occupy the emotional spaces in between,” Gilchrist said. “Sometimes the performance says one thing, and the music says another.”

Every year, Applause donates all of its proceeds to charity, Stone said. This year, it chose Apna Ghar, an organization that supports survivors of domestic and sexual violence in Chicago, especially in immigrant communities, he said.

Gorin, who was in charge of the selection process, said Applause wanted to support domestic violence survivors in Chicago, and she believes Apna Ghar is an effective service provider for a wide-ranging, diverse community. To spread the word, Applause has been posting facts about domestic violence on Facebook and promoting the screening, she said.

Labovitz said she hopes students are inspired by the possibilities for film on campus, despite program changes and a restructuring of funding.

“I hope people take away that student film is still possible on campus,” she said. “It’s good to support causes dear to you and have a purpose to your work outside of pure creative development.”